The Word: Traps and Vents

By Bruce Barker | August 01, 2010
Once again, The Word invites you to travel into the dark realm of terms that often are misused or misunderstood in home inspection reports. The Word hopes you will find this trip informative and maybe a little entertaining.

The Word's terms today are plumbing trap and its protector, the vent. The Word finds these terms interesting because people often don't understand the relationship between these plumbing system components.

Why traps and vents?

The principal reason for traps and vents is to keep sewer gas out of the home. Sewer gas is not just malodorous. It contains methane, which in sufficient quantities can explode, and it may contain pathogens that can cause illness. 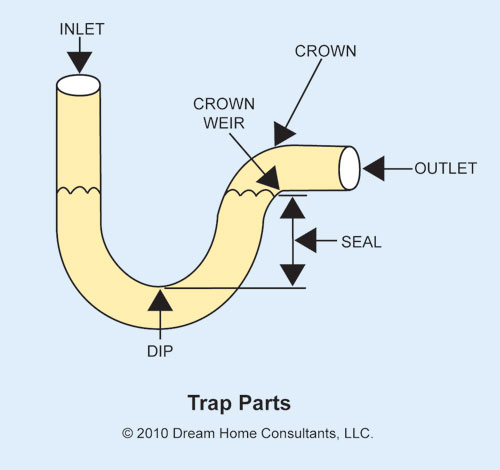 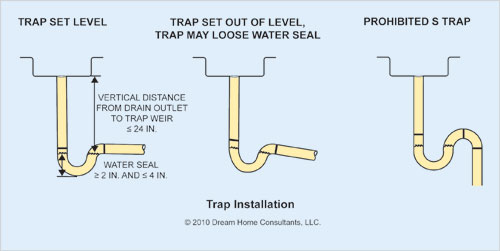 The minimum size for a trap is shown in the following table:

The problem with S traps

Let's discuss S traps for a moment. This trap is no longer accepted by codes in the United States; although it is not uncommon to find them in older homes and in buildings in other countries. S traps are more prone to water seal siphoning than P traps. If an S trap is properly protected by a vent, the S trap will usually work just fine. An S trap in newer construction is a deficiency. An S trap in older construction may require only a warning to the client to be aware of potential water-seal siphoning. 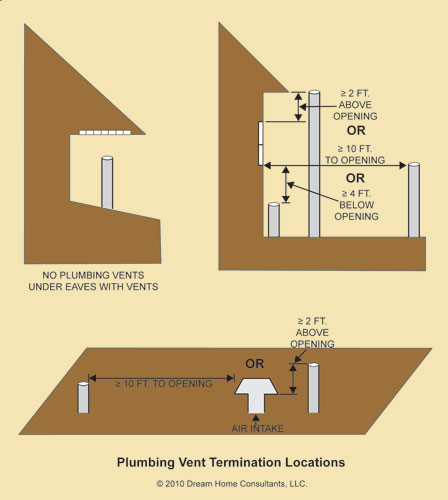 Vents must terminate at least 10 feet horizontally, or four feet below, or two feet above any operable window or door, including such openings on nearby buildings. Improper vent termination is a common problem when a single-story roof is below second-story windows. Vents also must terminate at least 10 feet horizontally or three feet above any air intake for a mechanical ventilation system, such as those being installed in newer homes to provide necessary outside air ventilation. Some builders and energy-efficiency contractors have not received the memo on this requirement.

What about vents within 10 feet from a window, but are around a corner or on the other side of the roof ridge? The International Residential Code provides no guidance on this specific question, so the answer is subject to interpretation. The Word believes that when in doubt, a literal and conservative interpretation is appropriate. Therefore, an operable window or air intake opening within a 10-foot radius of a plumbing vent probably is a deficiency unless the vent is the required distance above or below the opening. Sewer gas can travel around corners and across roof ridges, so the location of the vent relative to the window or opening is irrelevant.

Vents may be used only as vents unless they specifically are designed to be used in other ways. A vent usually should not be used as a fixture drain, even for low-flow fixtures such as a water softener discharge tube or an air conditioning condensate drain. Vent pipe roof terminations usually should not act as a mast for antennae, flags and other things that may place a load on the vent pipe.

Air admittance valves (AAV) can substitute for external vents; however, they may not be allowed in some jurisdictions. These valves have a flap that opens to admit air that protects the trap and closes to prevent sewer gas flow. They are most commonly found venting fixtures (such as island sinks) where installing an external vent is difficult.

AAVs must be accessible, installed at least four inches above the center-line of the highest fixture drain (trap arm) being vented, separated from the trap weir by at least two pipe diameters, and installed within 15 degrees of vertical.

AAVs often are confused with a similar device called a check vent, also called a cheater valve. The Word thanks Jim Katen for this insight. Check vents are approved for use only in manufactured homes and recreational vehicles. You should not see them in site-built homes. Look at the label on the device. You should see the listing ANSI/ASSE 1051 on single-fixture and branch AAVs or ANSI/ASSE 1050 on stack AAVs. If you don't see this listing information, call for evaluation by a licensed plumbing contractor.

Proper installation of traps and vents is a health, safety and convenience issue for our clients. Most problems with these components are minor, but like other minor problems, they can turn serious given the right conditions.

Memo to the plumbing Gods and other authorities: The Word does not reside on Mt. Olympus (just at its base) and welcomes other viewpoints. Send your lightning bolts or e-mails to inspectorbruce@cox.net. The thoughts contained herein are those of The Word. They are not ASHI standards or policies.