By Bruce Barker | November 01, 2009
Once again, The Word invites you to travel into the dark realm of terms that are often misused or misunderstood in home inspection reports. The Word hopes you will find this trip informative and maybe a little entertaining.

The Word’s terms today are fireblock and its cousin, draftstop. The Word finds these terms interesting because some confusion about them occurred during discussions about the proposed pre-drywall inspection standards. The Word admits to misusing these terms in the days before taking up residence at the base of Mt. Olympus, thereby gaining a modicum of wisdom.

The easiest way to distinguish between fireblocks and draftstops is to remember that fireblocks occur in walls and draftstops occur in floor/ceiling assemblies. Fireblocks limit the spread of fire between stories and horizontally in wall assemblies such as soffits. Draftstops limit the spread of fire in open spaces between floors and ceilings that have useable space above and below. Common examples of areas requiring draftstops include floors supported by open web trusses and floors above suspended ceilings. 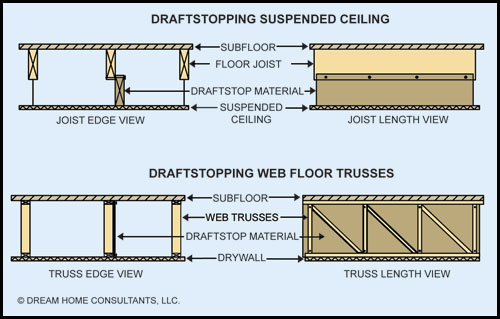 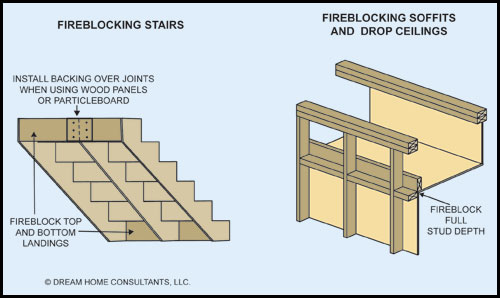 
Common fireblock materials include 2-inch (nominal) thick lumber or two pieces of 1-inch thick lumber, 23⁄32-inch thick wood structural panels, ½-inch thick drywall, properly secured fiberglass insulation and approved fire-resistant caulk. Verify that visible joints between pieces of fireblocking material are staggered and that the material is secured in place so that it will not settle out of position over time. Damage to fireblocks and draftstops should be repaired and penetrations such as electrical cables and HVAC ducts should be sealed.

The Word has seen these terms spelled as compound words (fireblock and draftstop) and as two words (fire block and draft stop). The Chicago Manual of Style states that the evolution of a new term goes from two words, to hyphenated words, to one word. The Word recommends using the compound word. The Word has seen the term firestop used as a synonym for fireblock, but The Word does not recommend firestop because it is too easily confused with draftstop. The IRC does not use the term firestop.

Memo to the fire Gods and other authorities: The Word does not reside on Mt. Olympus and welcomes other viewpoints. Send your lightning bolts or e-mails to inspectorbruce@cox.net.