Once again, The Word invites you to travel into the dark realm of subjects that may be of interest to home inspectors. The Word hopes you will find this trip informative and maybe a little entertaining.

Our subject this month is fire words. The Word finds this subject interesting because there are lots of words in building codes that deal with slowing the spread of fire and smoke in a building. Some of these words sound similar, so there’s often confusion about what they mean and about how to inspect the components described by these fire words. Let’s try to reduce this confusion. 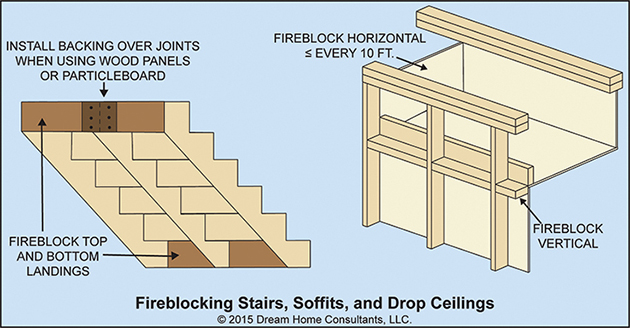 A firestop is a material, such as a fire-rated spray foam or caulk, that is used to fill the space around a penetration of a fire resistance–rated assembly (firewall). A fireblock and a firestop provide the same function (slow the spread of fire), which is why they are often used interchangeably. Technically, however, they are different.

Draftstopping is intended to contain smoke from a fire within an area of the building. Common examples of where draftstopping should be installed are above a suspended ceiling, and in floor trusses where habitable space exists both above and below the trusses.

To a fire, an open cavity in a building is like a chimney. The cavity is an unobstructed path for fire to spread quickly. This situation is a hazard, not only to the building and its occupants, but also to firefighters trying to locate and extinguish the fire.

Lack of fireblocking and firestops constitutes two defects: the fire spread defect and the lack of insulation defect.

Fireblocking and firestops should be installed at each story, and between the top story and the attic. An intact top plate usually is the fireblocking in wood-framed walls. All openings in the top and the bottom plates should be filled with a fire-rated caulk or foam. This material is usually dyed red to distinguish it from other sealants. Until recently, openings for electrical cables and small pipes often weren’t filled, so it’s uncommon to find these openings filled in older houses. The Word doesn’t make an issue of this in older houses, but you should decide how to report visible lack of firestops around small openings in the top and the bottom plates. 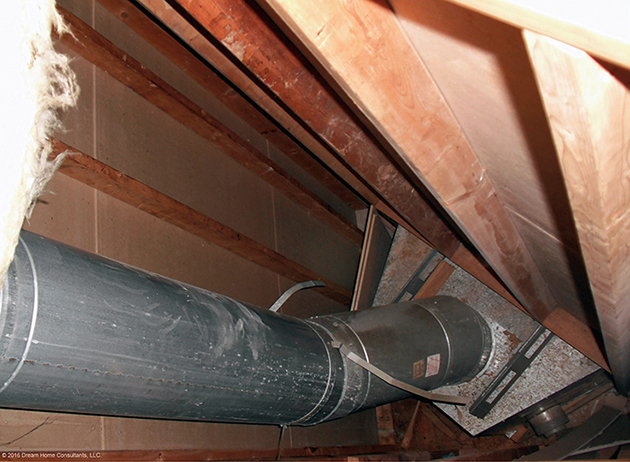 Photo 1. If you can see all the way down from above, its usually wrong. 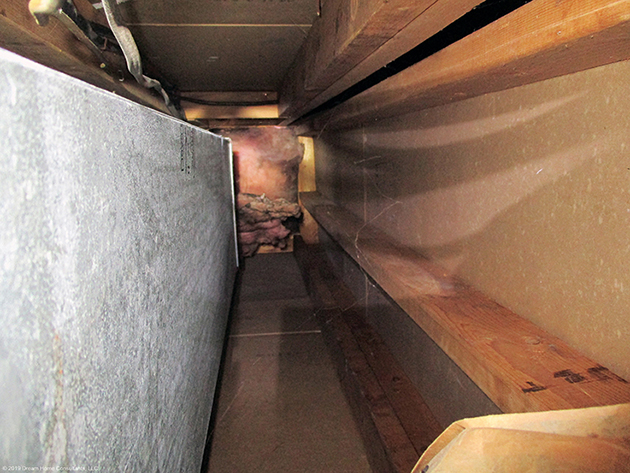 Photo 2. If you can see all the way up from below, its usually wrong. 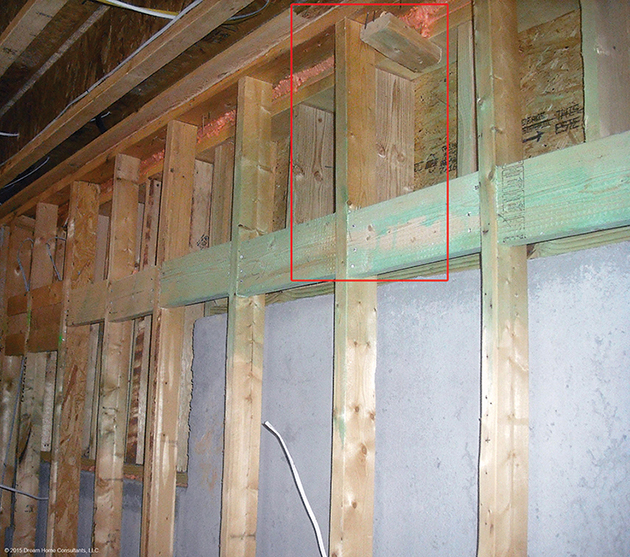 Photo 3. Fireblock double walls every 10 feet both, as shown in the red box, and also along the foundation. 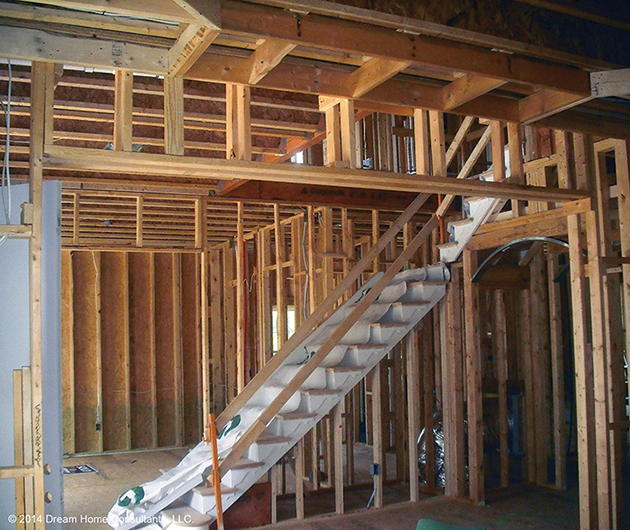 Photo 4. This double-stud header is longer than 10 feet and should be fireblocked near the center.

Highly flammable materials are often stored in garages and ignition sources are numerous. There is also the risk of carbon monoxide being generated in the garage and leaking into the house. It makes sense, therefore, that attached garages should be separated from occupied spaces.

The common method of separating an attached garage from occupied space is by using ½-inch thick drywall. A common potential violation of this separation requirement is when people try to dress up the garage by installing wood paneling on the walls and sometimes on the ceiling (Photo 5). If there’s drywall behind the paneling, then it is okay. The problem is that sometimes you can’t tell what’s behind the paneling. In this case, report the possible fire separation issue, explain the implication and recommend evaluation to determine what, if anything, needs to be done. 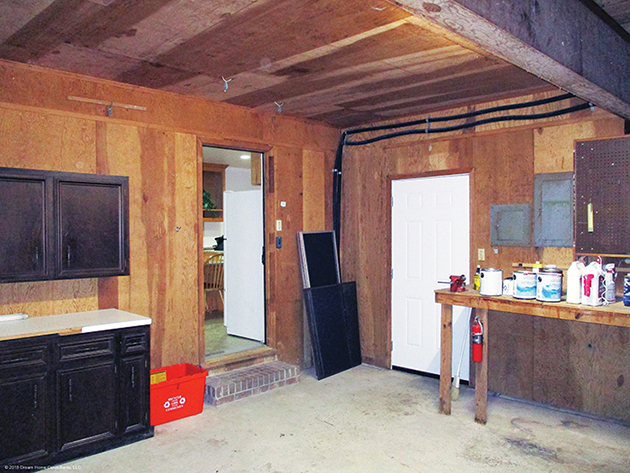 Photo 5. The wood paneling and wood ceiling are both probably wrong.

Doors between an attached garage and the house should be solid wood or steel that are at least 1 and 3/8 inches thick, and should be rated for at least 20 minutes of fire separation. These doors should not open into a bedroom. The doors should not have penetrations such as a window or a pet door. Windows are not uncommon in these doors in older homes. This is a reportable defect, but The Word doesn’t make a big issue about this (Photo 6). Pet doors, in The Word’s opinion, are a bigger issue because they are a more susceptible to penetration by fire and carbon monoxide (Photo 7). 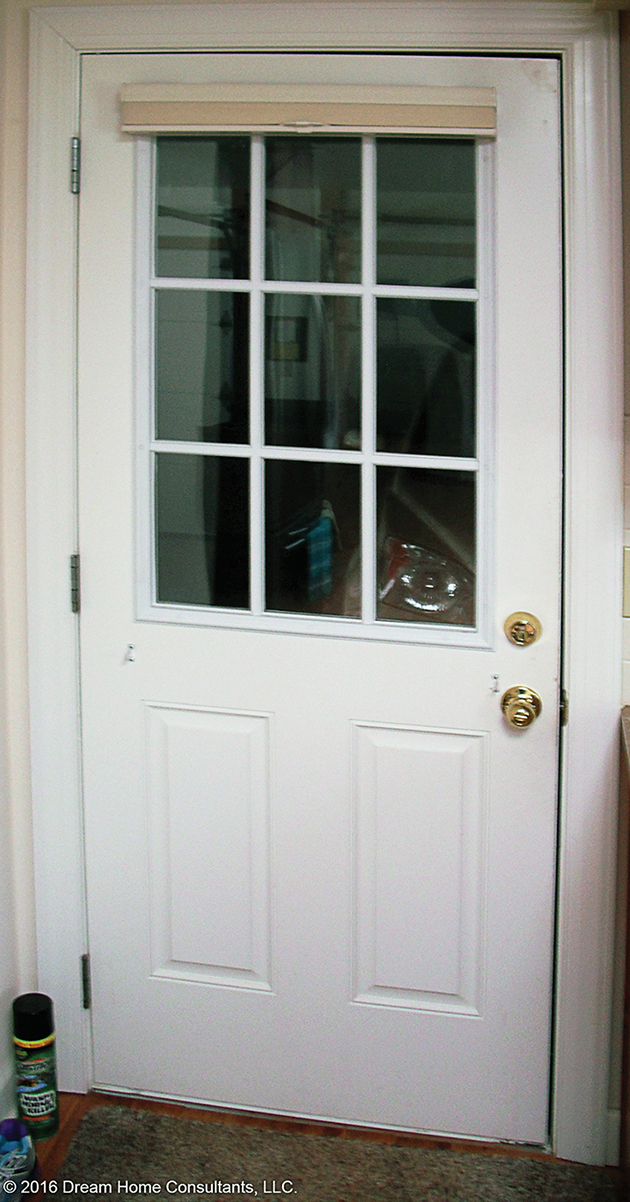 Photo 6. Glass in a door to the garage is a fire seperation defect, but The Word doesn't lose any sleep about this one in his house. 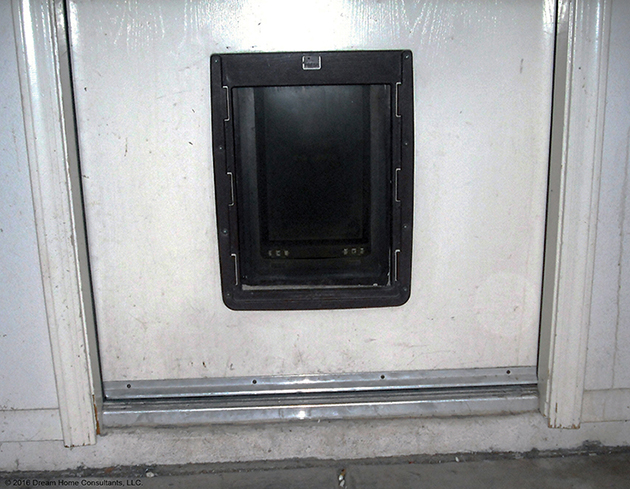 Photo 7. No pet doors allowed between the house and the garage. 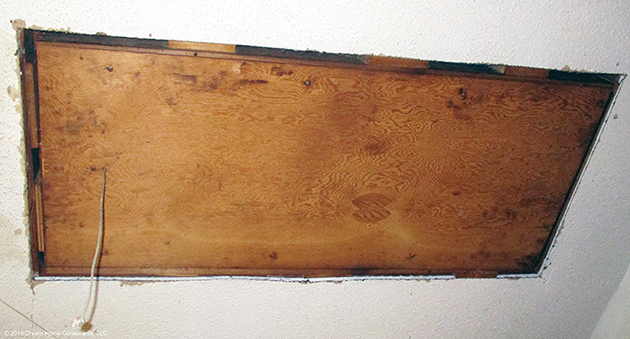 Photo 8. Pull-down stairs are almost always wrong in a garage. 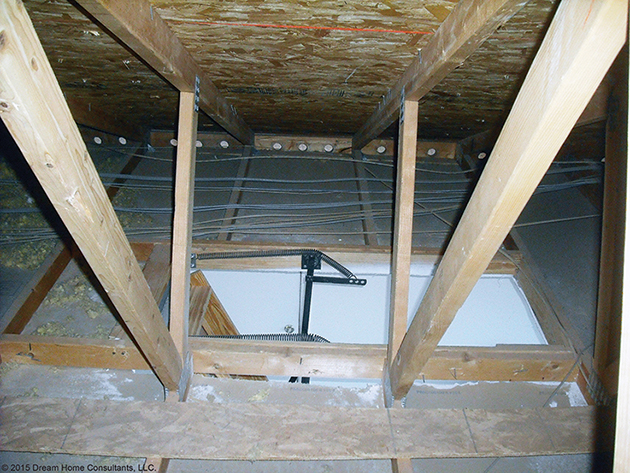 Photo 9. Couldn't they have installed it between the chords and avoided an expensive repair?

Penetration of the fire separation walls and ceilings by flexible HVAC ducts is another common problem in parts of the country where furnaces and air handlers are installed in an attached garage. This is not allowed. Ducts in the garage should be approved sheet metal until the duct penetrates the wall or ceiling, then it may transition to flexible duct.

The space around penetrations of the fire separation walls and ceilings should be filled with a fire-resistant sealant such as foam or caulk. A metal escutcheon is frequently used around combustion vents (Photo 10). 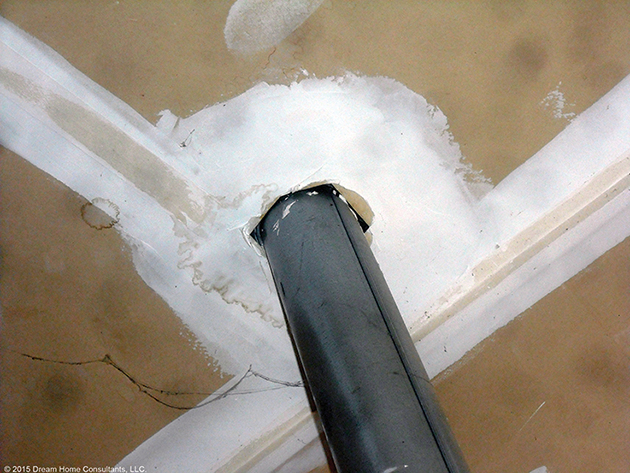 Photo 10. There should be a metal escutcheon where this water heater vent penetrates the garage ceiling.

Houses with a drive-under garage present a quandary for inspectors. This situation is especially vexing when inspecting houses that were built before fire separation requirements existed or were enforced.

There is no grandfathering of safety defects.

Firewalls between dwellings should be continuous and intact from the foundation to the roof sheathing. A parapet wall that extends at least 30 inches above the roof is required unless an exception applies. A common exception involves installing a Class C fire–rated roof covering (fiberglass shingles usually comply) and installing fire-retardant plywood, or 5/8-inch Type X drywall, for 4 feet on each side of the firewall.

Firewalls should be either one two-hour wall or two one-hour walls. The walls should be intact except for electrical receptacles and should not contain plumbing pipes or HVAC ducts (Figure 2). 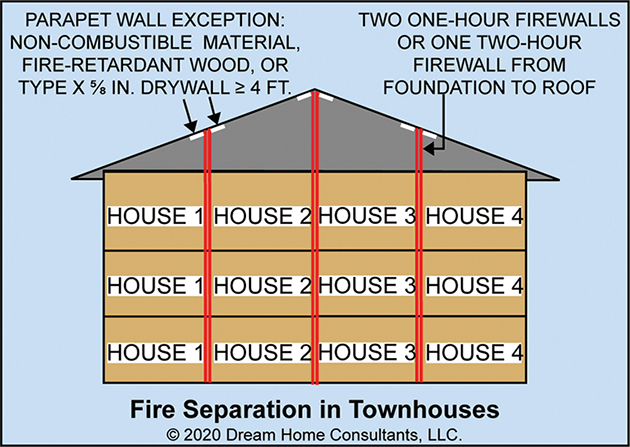 The firewalls should be continuous and intact from the foundation to the ceiling if the dwellings are built side-by-side. There is an exception that allows a draftstop in the attic under certain conditions (Figure 3). 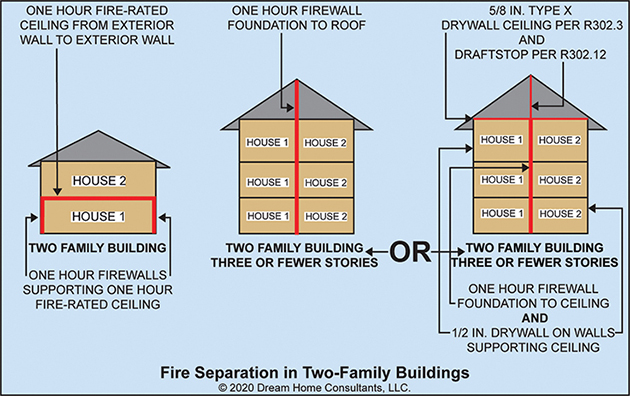 Whether or not draftstopping is installed is often not visible during a home inspection, so we often don’t have to worry about it. The most common visible place where draftstopping may need to be installed is in an unfinished basement that could become usable space.

Draftstopping is required when there is usable space both above and below an open web floor truss system or a suspended ceiling, and when the open area is more than 1,000 square feet. The most common draftstop materials are ½-inch drywall and 3/8-inch wood structural panels.

A relatively new and somewhat obscure IRC requirement is to install ½-inch drywall or other approved materials on the underside of I-joists, open web floor trusses and dimensional lumber that is smaller than 2 x 10. The most common places where this may be required is in basements and in crawlspaces that contain furnaces, heat pump air handlers and water heaters. This IRC requirement is not enforced in all jurisdictions, so you should check with your local building official before reporting this as a defect.

Fire safety–related building components are important, not only for occupants, but also for firefighters. Reducing the opportunity for ignition, and slowing the spread of fire and smoke gives occupants time to escape and makes fighting the fire less risky for firefighters.

Between fire safety and energy efficiency, home inspectors perform a significant service by looking for and reporting defects in fire safety–related building components. Your clients, first responders and the planet will thank you.

Memo to Vulcan, god of fire: The Word does not reside on Mt. Olympus (just at its base) and welcomes other viewpoints. Send your lightning bolts or emails to Bruce@DreamHomeConsultants.com.

The Word thanks firefighter Matt Jacoby for reviewing this article.