Once again, The Word invites you to travel into the dark realm of issues that sometimes are misunderstood by home inspectors. The Word hopes you will find this trip informative and maybe a little entertaining.

Deck construction is far too complex for one column. We'll begin this month with basics including flashing, deck ledgers and hardware. We'll continue next month with more advanced issues.

We'll discuss single-level decks designed for the standard 40 psf uniform live load. Multi-level decks and decks supporting concentrated loads such as spas should be designed by a qualified engineer.

Let's first review two of the most significant problems with decks. The headline grabbers are the deaths and injuries caused when decks collapse and when guards fail. Decks collapse and guards fail for many reasons, but two of the most common reasons are improper fastening of decks and guards, and deterioration of deck fastening to the home due to water infiltration. Water infiltration is usually caused by improper drainage where the deck is attached to the home. Because water infiltration causes many other problems, let's look at deck drainage first.

The area where the deck ledger board is attached to the home is one long, potential water infiltration area and one of the longest such areas around the home. A properly installed drainage plane to control water is essential. Figure 1 shows the ideal arrangement of multiple materials that constitute the drainage plane. You won't be able to see most of the details shown in Figure 1 during a home inspection, but here are a few things that you might be able to see. 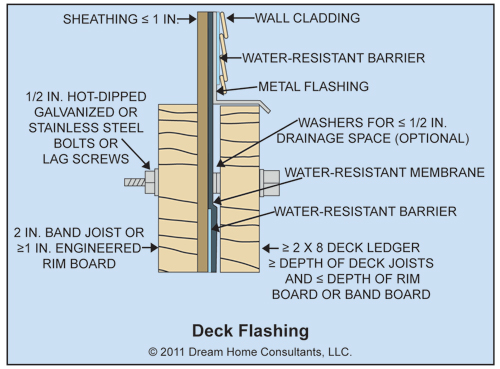 The deck ledger board should be attached to either a nominal 2x dimension lumber band board or to an engineered 1-inch or thicker rim board. The deck ledger should not be attached to I-joist type trusses or to open web (metal-plate connected) trusses without written engineer-approved plans. Figure 2 shows a summary of these typical requirements.

The type and location of fasteners are essential to ensure sound structural attachment of the deck to the home. Bolts or lag screws of ½-inch diameter are the usual minimum size. Hot-dipped galvanized is the usual minimum coating material for all hardware including nails, screws and joist hangers. Stainless steel may be required in severe-exposure areas such as near salt water. 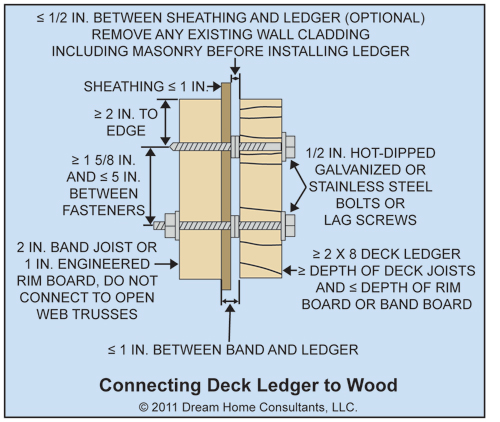 Figure 3 shows the typical location of deck ledger board fasteners. The spacing of fasteners depends on the length of the deck joists, whether attachment is to a dimension-lumber band or to a rim board, and on the fastener type (bolt or lag screw). Typical fastener spacing for deck ledgers attached to engineered-rim boards is between 9-12 inches on center and between 11-24 inches for deck ledgers attached to dimension-lumber band boards. The more distant spacing applies to shorter deck joists and the closer spacing to longer deck joists. Lag screws need closer spacing than bolts. Refer to your local codes and to the references cited at the end of this column for more information about ledger fastener spacing.


Attachment of the deck ledger board is intended to accommodate vertical loads and lateral loads. Vertical loads are the weight of the deck materials (dead load) and the weight of occupants and belongings (live load). Lateral load is the force that wants to rip the deck out of the wall in the horizontal direction. You may see hardware such as that shown in Figure 4 as an alternate method of accommodating lateral loads. There should be at least two of these brackets per deck. Note that these brackets do not replace lag screws or bolts unless allowed by an engineer or by the bracket manufacturer's instructions. 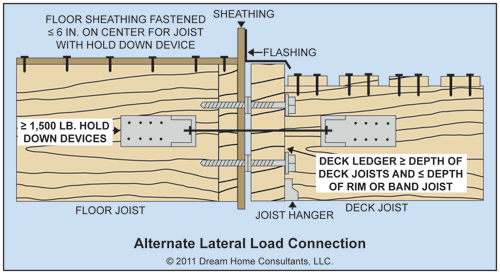 Almost all decks built before 2004 used wood treated with an arsenic-based compound known as CCA. The Federal government outlawed CCA as of December 31, 2003. CCA is somewhat corrosive to deck hardware, although hardware corrosion due to CCA isn't widespread. Hardware corrosion in CCA-treated decks is more likely due to severe environments and due to substandard hardware.

Most decks built beginning sometime in 2004 use wood treated with compounds such as ACQ and CBA. These compounds are more corrosive to deck hardware and hardware failure has occurred, particularly in decks built from 2004 to around 2007, or so when the corrosion problem became more widely known. You should look extra carefully at hardware on decks built since 2004, and especially at decks built in the early years of the conversion from CCA-treated wood.

The bottom line
For many years, deck building was lightly regulated and decks often were not carefully inspected. The 2009 IRC has a prescriptive section on decks and the new 2012 IRC expands on the 2009 code coverage of decks. Two other excellent guides to deck construction are DCA 6 Prescriptive Residential Deck Construction Guide 2009 IRC Version, available at awc.org/codes/dcaindex.html, and the Deck Framing Connection Guide by Simpson Strong-Tie, available at www.strongtie.com/ftp/fliers/F-DECKCODE09.pdf.

Decks are frequently built by weekend handymen, often with little more than a "how to" book, if they even have that. Given the risk of poor construction and the risk of personal injury and property damage, decks deserve special attention during our inspections.