Last month, we reported on ASHI’s participation in the National Deck Safety campaign developed by Simpson Strong-Tie and the North American Deck and Railing
Association (NADRA).

Frank Lesh, ASHI past-president, appeared during The Today Show’s 8-minute deck safety segment broadcast June 3. (The segment was rescheduled from May 30 to June 3.)

Deck safety continued to be a hot topic, generating even more positive publicity for ASHI.

“USA Today,” the national newspaper, took note of all the deck safety activities and quoted Lesh, along with representatives from NADRA and Simpson Strong-Tie, in the article “Summer highlights deck danger,” published June 11 in print and online.

The deck safety demos also caught the attention of the local ABC affiliate in the California Bay area, which requested that an ASHI member take part in a segment it was doing on the topic. Max Curtis, a member of the ASHI public relations committee, obliged. He recounts what goes into getting free publicity in “Four hours for four minutes airtime.” 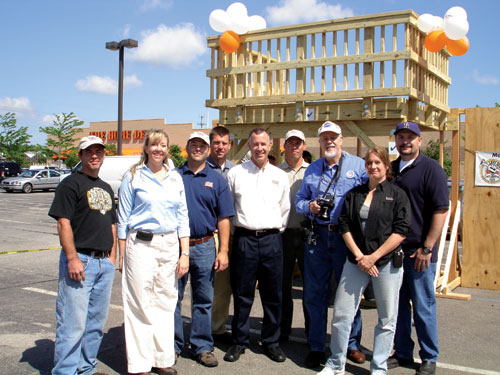 Photo: Representatives from Simpson Strong-Tie, ASHI and the North American Deck and Railing Association attended the deck collapse and safety demo event in Evanston, Ill., on May 31.


Like a pebble thrown in a pond, a public relations campaign, especially when supported by several national organizations, can create a ripple of excitement beyond its planned activities.  ASHI was invited to join the Deck Safety Month campaign by Liv Faris, Colehour+Cohen, Public Relations & Social Marketing, Seattle, Wash. From the kick-off press release, ASHI has benefited from national and local media attention.

We gathered at the Simpson Strong-Tie headquarters in Pleasanton, Calif. Present were a number of representatives from Simpson, Michael Finney, the consumer reporter for the local ABC affiliate; and me.  Simpson had mocked-up two decks approximately 6' off the ground. One deck was built with all the Simpson brackets, straps and bolts that could possibly be installed on a deck. The other deck was put together with nails.

Michael Finney spent about 45 minutes interviewing one of the Simpson engineers about the good and bad points of the two decks. Pins had been installed to hold the ledger board of the bad deck to a mocked-up wall structure.  The pins were then pulled from the structure, simulating a ledger board attachment failure. The deck, grill, lawn chairs and flower pots all came crashing to the ground.

After the demonstration, I left with the reporter and the Simpson representative to visit a couple of real-life decks. The first deck we looked at was recently constructed at a Simpson employee’s house. This deck had almost as much hardware installed as did the “good deck” at the Simpson facility. We spent some time here talking about the need to properly flash the connection of the deck to the house. We then traveled to another residence to look at a deck that was reported to have some issues. Unfortunately, this second deck turned out to be about 40 years old and was in dire need of replacement. Neither of these decks gave me much opportunity to perform a proper inspection.

The shoot lasted about 4 ½ hours; the segment that aired was about 3 or 4 minutes long. It included footage of the interview and demonstration at the Simpson facility, me basically telling the homeowner at the 40-year-old deck how bad his deck was (which he already knew) and some historical TV footage of a deck collapse in San Francisco that cost some lives.


The power of press releases

Last month, we reported how an ASHI press release on foreclosures motivated the real estate editor from the Herald-Tribune Media Group in Sarasota, Fla., to invite ASHI member Bill Mason to come into the studio for a TV interview and podcast. That release, “Scrutiny is Key When Purchasing Foreclosed Homes,” can be downloaded from the media section of the ASHI Web site.

This month, Mason reports that the press release “American Society of Home Inspectors Introduces Client Bill of Rights” was sent to all Realtors® in Florida via the Florida Association of Realtors June 11 EarlyBird News
e-newsletter.

This press release was distributed nationally to newspapers, syndicates, trades and the wire the week of June 9. ASHI members received a template version for their own use in the May 30 First Thing and again in the June The Inspector e-newsletters.

ASHI member Joe Kelly, Advanced Home Inspection, Virginville, Pa., spotted ASHI in a newsletter and wrote:
“I subscribe to this newsletter below and was surprised today to find ASHI Inspectors mentioned as a safeguard against bogus contractors. Was this a PR effort, or did they pick this up independently?”

The newsletter was from Scambusters.org and included a link to ASHI.org. The comments could not be traced
directly to a contact with ASHI or a specific press release.

It serves as another example of the value of a strong, continuing public relations program. From the beginning, the Society choose to focus on public relations rather than paid advertising to take its message to the public and the real estate industry because the editorial content generated by a successful PR campaign has greater credibility and circulates better than advertising. It’s also a more cost-effective method of getting a message to a variety of audiences.

From appearances by ASHI Founder Ron Passaro on “Good Morning America” in the early years to Lesh’s recent participation in a “Today Show” segment, public relations continues to work well for ASHI and its members.