In this article, we focus on end bearing, with the understanding that many other things can happen to joists and beams, including rot and insect damage.

House structures are a complex set of interconnected components comprised of different materials. There are many types of failures, but failures at connections are among the most common and the most serious. In this article, we will look at a specific connection—the end bearing of beams and joists. Beams are a critical component in that they typically transfer the large load of several joists to a foundation or column or post. They carry the live and dead loads of large floor areas. They also may carry the loads from additional floors above through walls or columns.

Many beams also have intermediate supports and although there are some special considerations for those, we will focus on bearing at the ends of beams and joists.

Joists are smaller and more numerous than beams and less critical, in the sense that they each carry a much smaller load than beams. Nonetheless, joists that lose their end bearing can lead to collapse, especially if several in one area all lose their bearing.

Beams and joists should rest on not less than 1 1/2 inches of wood or steel, or 3 inches of masonry or concrete. Steel beams only should be supported with steel shims. Steel shims should be welded to the beam so they will not move. Watch for shims that have slid out of position. Watch also for wood shims under steel beams. They often crush and creep. Shims often will move because the top surface of the foundation wall is not level. 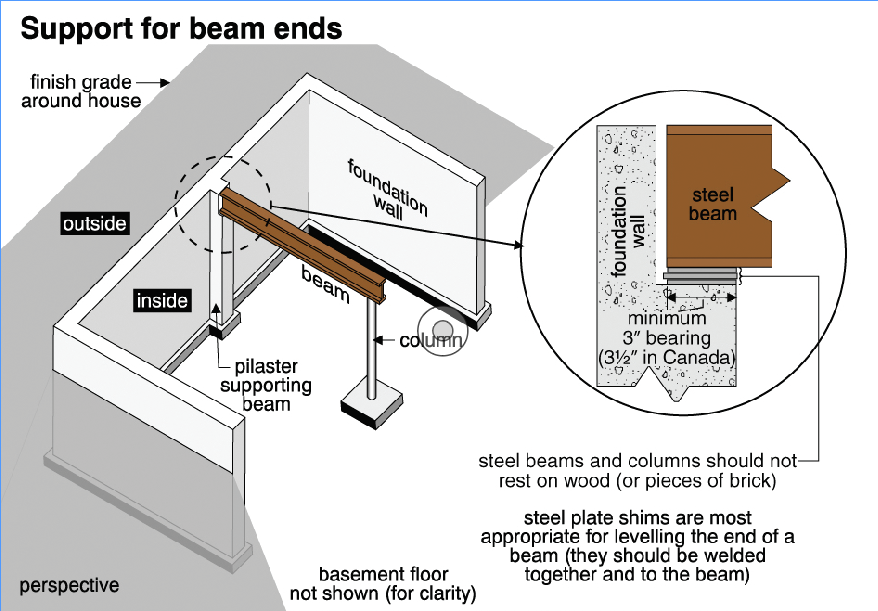 Cedar, for example, is soft and doesn’t make good shims for beams.

Beams on masonry walls should rest on at least 3 inches of solid masonry. Many recommend that beam ends rest on solid masonry or concrete all the way down to the footing. In any case, a beam should not rest directly on a hollow concrete block. At least the top row of block should be filled with concrete. This can be difficult to determine during a home inspection.

The point at which the end of a wood beam is embedded in a concrete or masonry foundation wall is prone to rot. Best practice is to have a ½ inch of air space around the end, top and sides of the beam to allow the wood to dry. In some cases, the end of the beam is coated with pressure-treating chemicals to make the beam more rot resistant. 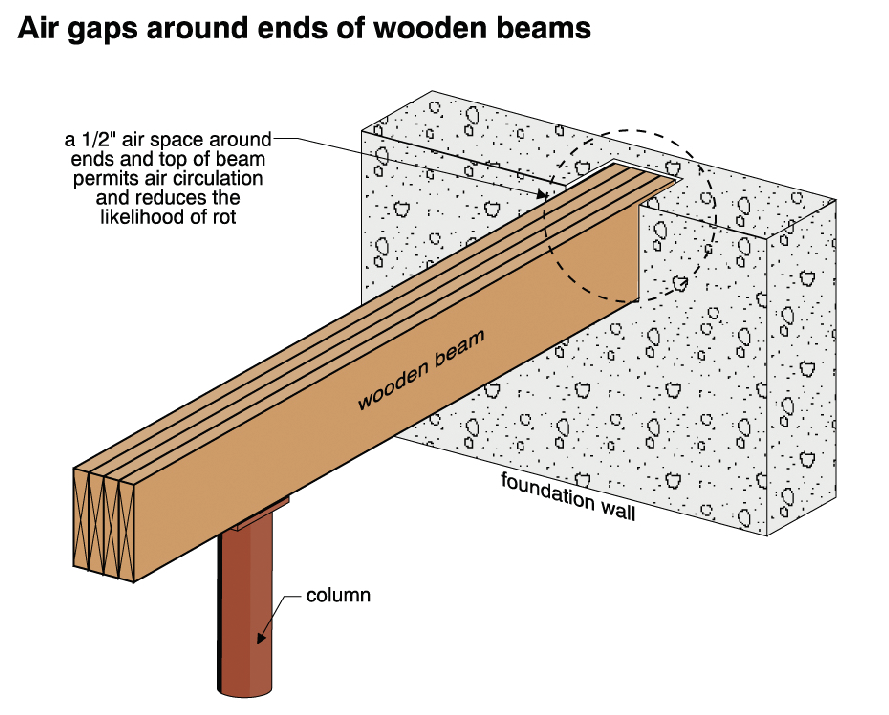 Causes of problems
If the bearing for beams is inadequate, it may be the result of one or more of the following:

At the points at which joists rest on beams, best practice is for joists to rest on the full width of the beam or wall rather than just 1 1/2 inches of it. Good practice also includes splicing joists that overlap from the opposite side of the beam. The joists can be nailed together with three 10d nails, or with metal or wood splices.

Joists can be supported in many ways:

Joists may not have enough end bearing because of one or more of the following:

At the points at which joists are supported on the bottom flange of a steel beam, it is good practice to have the joists slightly taller than the beam and a wooden splice across the top of the steel beam.

The bottom of the splice should be at least 1/2 inch above the top flange of the beam to allow for vertical shrinkage of the wood members. It’s not unusual to get 4% shrinkage across the grain in wood framing members. That’s about 3/8 inch in a 2 by 10 joist.

Notching weakens joists
One of the weakest configurations is when the joist is notched and only the top part of the joist rests on a beam or foundation wall. This reduces the strength of the joist and concentrates loads in the top part. Check for cracks radiating horizontally from the top of the notch. This can result in serious structural movement, especially if more than one joist shows this crack. The solution involves supporting the bottom of the joist, often with joist hangers.

A better (but still less than desirable) arrangement is to notch only the bottom inch or so of the joist and rest the majority of the joist on a ledger board or steel beam flange, for example. The joists are weakened slightly by such an arrangement. Again, watch for horizontal cracks running out from the notch. 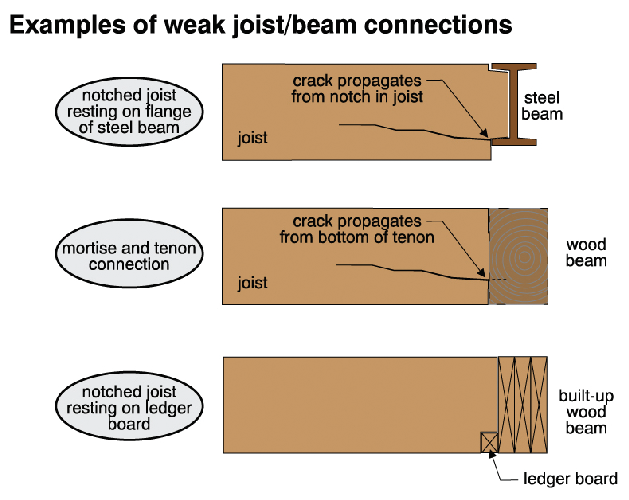 Joist hangers
Steel joist hangers can provide excellent support for joists on the sides of beams. This maximizes the head room in basements and crawlspaces because the joists don’t have to rest on top of the beams. However, joist hangers must be installed correctly to work properly. 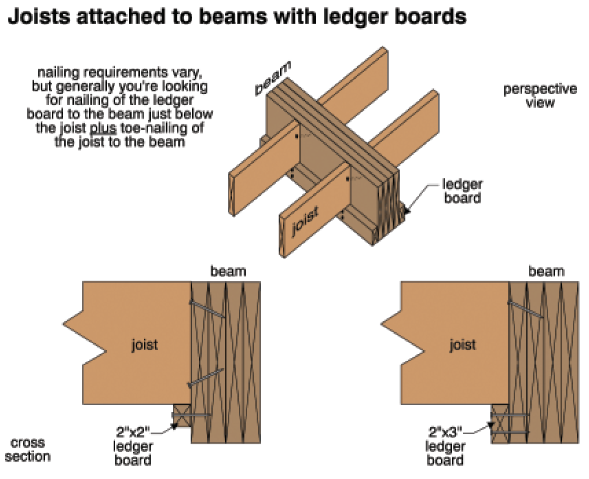 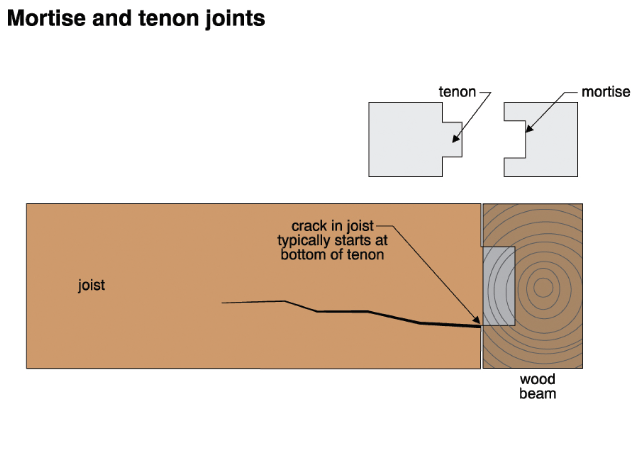 Inspection strategies
Where possible, look carefully at connections on beams and joists. Look for movement, including cracking and vulnerable conditions, that may lead to problems.