Last winter, I was inspecting a home at the bottom of a hill. I already had spotted a garden hose coming out of a foundation vent, so I knew this home was going to have some water issues. When I got into the crawl space, I found a sump pump sitting in a large plastic bucket that was in a depression near the crawl space hatch (Photo 1). The areas around the depression were dry, but the rest of the crawl space was pretty wet. I wrote it up as being an amateur installation that needed a drainage system and a proper sump pit. 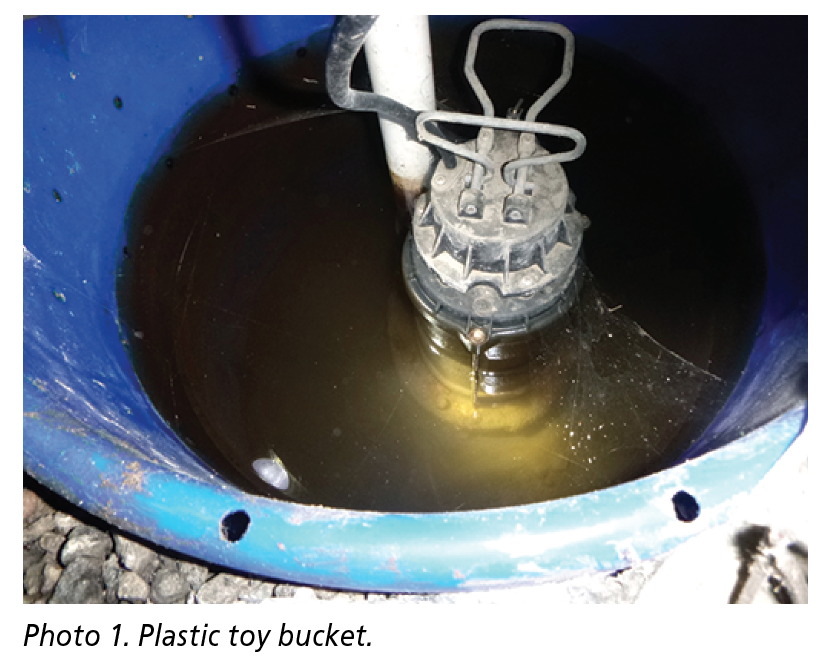 A few days later, I got a call from the listing agent who berated me for referring to the sump pump installation as amateurish and needing work. The agent informed me that a licensed contractor had done the work, and that he could provide invoices and other backup information. He challenged me to prove that the sump pump system was wrong and to show him the building codes that indicated why it was wrong.

I did some research and discovered that the local building department was not enforcing the following sections of the International Code Consortium’s International Plumbing Code1,2 that reference sumps and ejector pumps:

712.3. Sump design. The sump pump, pit and discharge piping shall conform to the requirements of Sections 712.3.1. through 712.3.5. (Readers should refer to the 2012 version of the ICC IPC, as cited at the end of this article, for these detailed sections regarding the sump pump, sump pit, discharge pipe and fittings, materials, ratings, maximum effluent level and the pump connection to the drainage system.)

712.4. Sewage pumps and sewage ejectors. A sewage pump or sewage ejector shall automatically discharge the contents of the sump to the building drainage system.

Also, while I was scanning the Internet, I found that the most descriptive document related to properly configured sump pump systems was published by the Institute of Catastrophic Loss Reduction, an independent, not-for-profit research institute affiliated with Western University in London, Ontario, Canada.3 I encourage you to review this useful document to learn more about sump pump systems.

In regard to the post-inspection situation I was handling, I realized that, because of the unfortunate lack of local enforcement, as well as the absence of evidence that showed the use of best practices, the contractor had gotten away with performing shoddy work. In my estimate, of every 10 sump pumps I see, eight of them are amateurish and barely function.

Some Background on Sump Pumps
Sump pumps are a builder’s answer to avoiding a wet basement. In many areas of the country in which basements are a standard feature, the builder always will include a sump pit that is tied to the perimeter drain tiles.

The basics are pretty simple. A sump pit is installed in the lowest part of the basement or crawl space where a sump pump sits and pumps out water. As the pit fills up, the pump turns on and moves the liquid out of the pit through pipes that run away from the foundation of the home. A one-way valve (the “check valve”) keeps water from re-entering the home. The drain line goes into a storm water system or to a downslope location.

Where I live and work in the Pacific Northwest, there are few basements; however, we do have an abundance of wet crawl spaces. Builders typically don’t include sump pits in crawl spaces, so when homeowners discover an issue with water, they call on a contractor, a handyman or a plumber who usually will install a sump pump.

The most frequent location for a sump pump to be installed is closest to the entrance of the crawl space, where it is easy to access. I wish I could describe all of the various types of ad hoc sump pits I’ve seen over the years, but that would be an extensive list. I can tell you that the types of sump pits I have seen have ranged from a divot in the dirt to a 3-foot-deep molded plastic pit sunk into a concrete floor. In between, I’ve seen 5-gallon plastic buckets, milk crates and trash cans (Photo 2). On the high end, I’ve seen that dry basement or crawl space professionals have sealed sump pits with redundant pumps and high-water alarms (Photo 3). 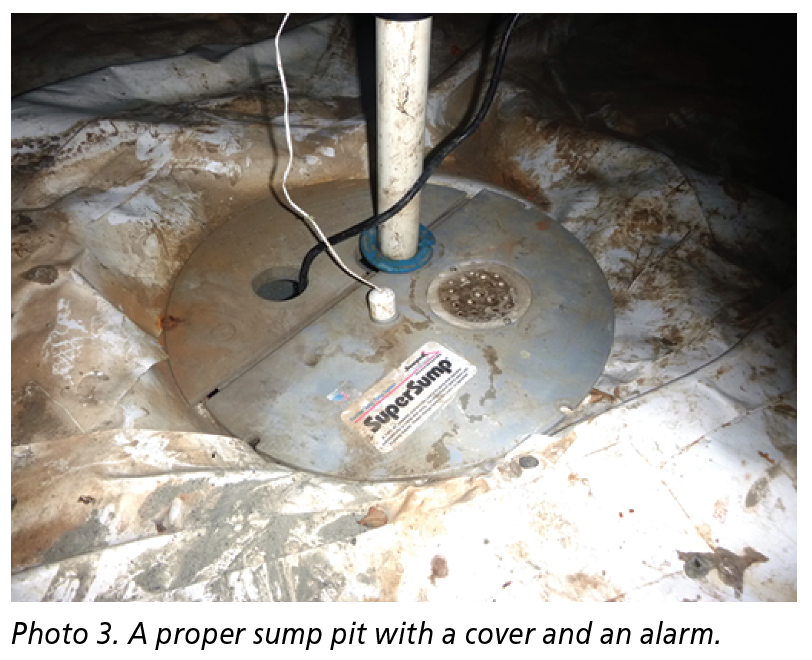 Types of Pumps
Two types of pumps are used in these systems: submersible and pedestal.

Inspecting Sump Pumps and Sump Pits
The first thing I try to determine when I’m inspecting a sump pit is what the installer intended to keep dry. I look for answers to the following questions:

In addition, I look at several other factors related to the sump pump system. For sump pumps located in basements, I note whether there is some type of cover that prevents kids from playing or falling in it. In areas with radon, the sump pit may have a dual purpose: drawing radon out and collecting drainage water. In this case, the cover should be airtight.

I also determine how the sump pump is powered. Normally, I expect to see an outlet directly over the pump. Building codes call for the use of a ground fault circuit interrupter (GFCI) outlet, but many inspectors (including myself) prefer to see the use of a regular outlet, because a GFCI outlet can “nuisance trip” at the worst time. Most people won’t notice this has occurred until the rising water has become a real problem. If a GFCI outlet is there, I test the outlet to ensure that it is working.

If there is water in the sump pit, I lift the pump float to watch it empty the sump pit. Most areas do require backflow preventers. This is also a good time to trace the drain outlet. In most areas, sump drainage lines cannot be directed into the sewer systems. In newer homes, it is common to see a drain that runs into a downspout-tight line. In older homes, the drain may go to a dry well or drain away from the home. I am never surprised to see the drain line terminate next to the foundation wall.

There are many things to know about sump pumps and I suspect that most inspectors have seen their share of “interesting” sump pump systems (Photos 4 and 5). To add to your knowledge for future inspections, refer to the resources listed at the end of this article to learn more about the relevant codes and how sump pumps should function. 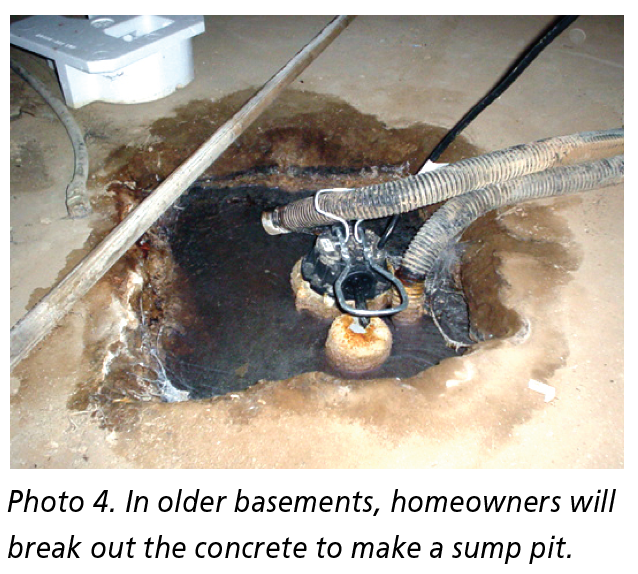 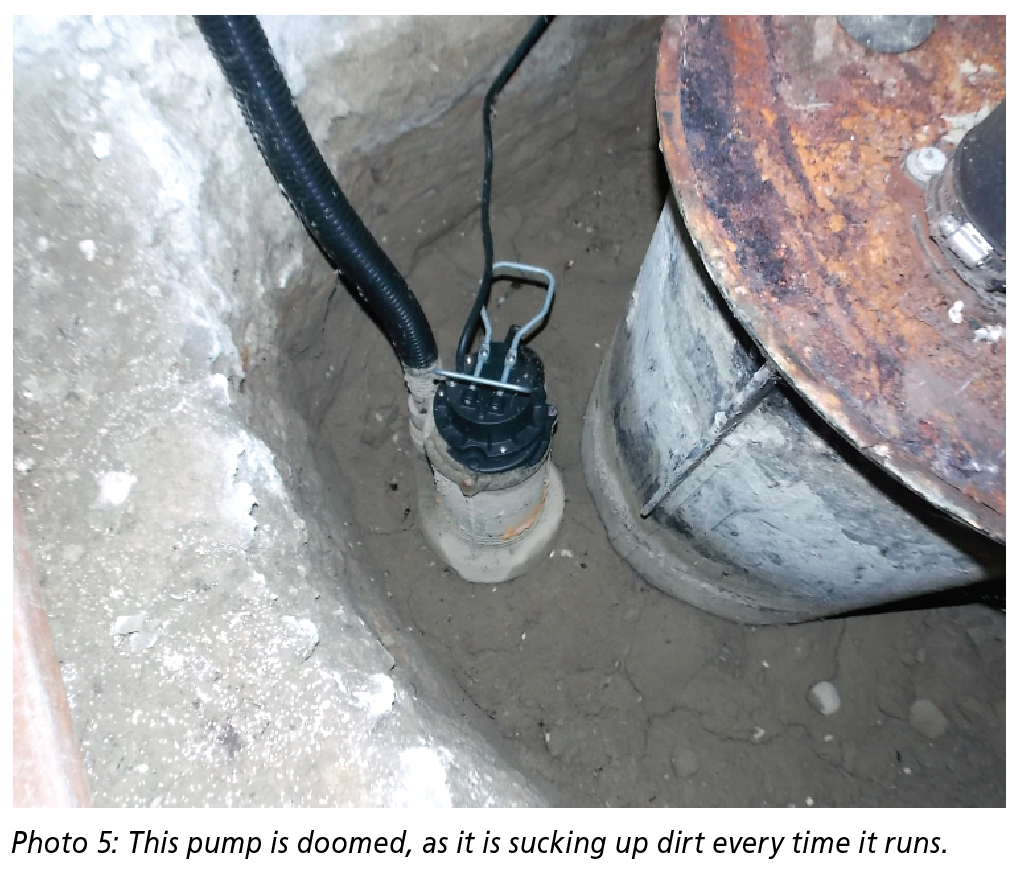