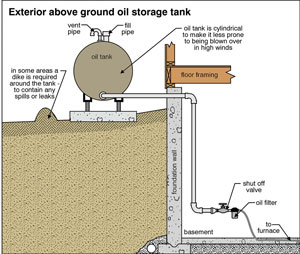 Approximately 8 million homes in the United States heat their homes with oil. We do have to inspect oil tanks as part of our home inspection, so let's have a look.

Before we start our discussion, let's review what the ASHI Standard of Practice calls for with respect to inspecting fuel oil storage tanks.

Inspectors are NOT required to inspect underground items including, but not limited to, underground storage tanks or other underground indications of their presence, whether abandoned or active.

Despite this, in our experience, many inspectors do report the possibility of an underground tank if they see evidence. We can also say from firsthand experience that clients may expect you to identify such things. You have a business decision to make here.

The typical oil-heated house has a steel (12-or 14-gauge) tank, which commonly has a 275-gallon capacity. There are many variations including fiberglass tanks, epoxy-coated tanks, stainless steel tanks and double-walled tanks. For any tank, you’re going to be looking for a data plate that includes a listing from an agency such as UL, ULC, CSA or Warnock Hersey. If you can't find a data plate or are not convinced it is an approved tank, recommend further evaluation by a specialist.

The tanks are commonly;

Many say that tanks are best located indoors, where they are protected from the elements and accessible for inspection and maintenance. Warm oil also flows better than cold. Indoor tanks should be at least 5 feet away from ignition sources, including the oil burner. Some areas require a secondary containment system for indoor tanks.

Many areas now require that outdoor, above-ground tanks be cylindrical rather than the traditional tall, oval shape (see photo below). Cylindrical tanks are less likely to tip over in high winds. The tall, oval-shaped tanks were designed to fit through doors for indoor installations. They are by nature top-heavy and not well suited to outdoor installations. 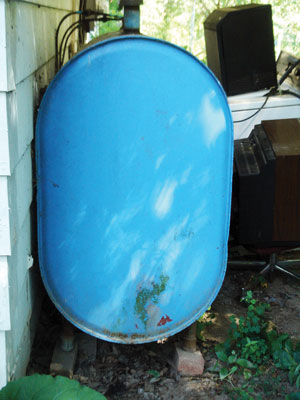 How Much Oil is in the Tank?

Indoor tanks typically have a fuel gauge to indicate the amount of liquid in the tank. Many tanks have an audible vent whistle alarm, warning that the tank is full. Overfilling the tank may result in an oil spill.

Fill and vent pipes are most often steel and terminate at least 2 feet from any building openings. Fill pipes should have a tight-fitting cap. Vent pipes should slope back to the tank with no low spots and should enter the top of the tank.

Abandoned fill and vent piping should be removed or plugged to prevent accidental oil delivery.

The pipes carrying oil from the tank to the burner (and back, in some cases) should be corrosion-resistant and protected from mechanical damage. The piping is typically steel or copper. Aluminum is not permitted.

While tanks typically last from 15 to 30 years, some home insurance companies insist on replacement after 15 to 25 years.

Things to Watch for

Here's a partial list of things to check when looking at an oil tank, in no particular order:

Most of these are fairly straightforward, but we will have a quick look at the rust issue and then at the tricky, high-cost one - the buried oil tank. 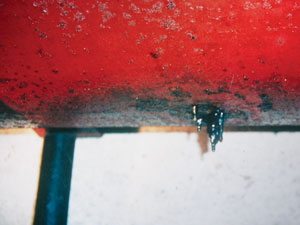 Rust - Where do Tanks Typically Fail?

When tanks rust, they will often fail at the bottom first. While the outside of tanks often shows rust, the most damaging rust comes from the inside out, as a result of water in the tank.

Look at the bottom of the tank. The one below would be hard to miss. Don’t touch rusty surfaces, especially if they are exfoliating or if there are protruding bumps. You may cause a leak.

Watch for staining on the pad below and the soil around outdoor tanks and on the flooring below indoor tanks. Follow the fuel lines where visible, looking for evidence of leakage as well. 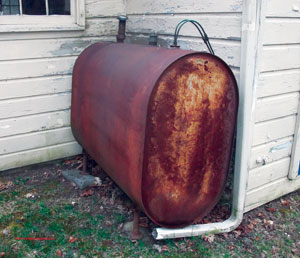 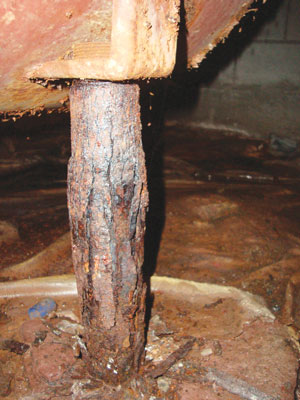 These are important due to the risk of environmental contamination and expensive remediation. The costs can be six figures. Let's assume you're going to look for evidence of an underground oil tank, irrespective of the ASHI Standard. Remember, if it's an older home with gas heating, it may have had oil previously.

If the tank is still in service, it is fairly easy to identify. The furnace or boiler will have an oil burner and you can typically follow the path of the oil supply line to where it disappears through a foundation wall, indicating the potential for a buried tank.

Identifying abandoned underground tanks is more difficult. While many jurisdictions call for the removal of abandoned oil tanks, some do get left in place. In some cases, the tanks can be filled with polyurethane foam, sand or concrete slurry and left in place. 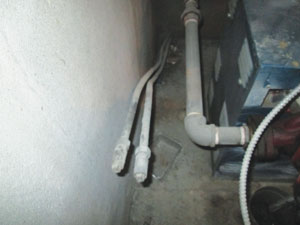 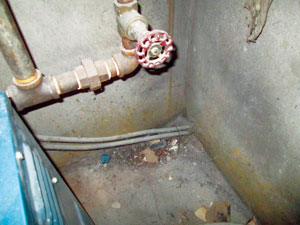 What to Look for

Interior fuel supply lines to the burner may have been removed, although sometimes you will see abandoned piping, filters and valves. The piping is often 3/8-inch copper or steel. It may be largely covered in concrete on the basement floor. 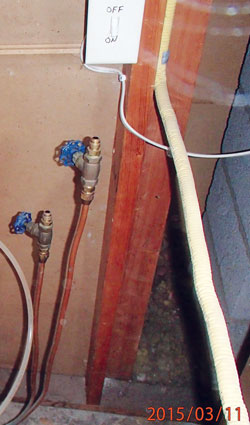 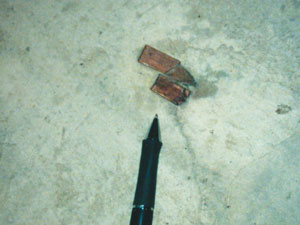 Exterior fill and vent lines may or may not be visible. They may be against the house wall or in the yard. If the fill and vent pipes are still there, the tank is almost certainly there, too. Tanks are usually close to the house and accessible for an oil delivery truck. 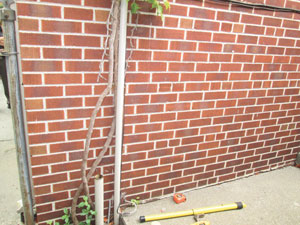 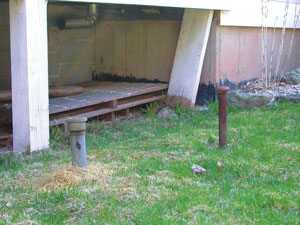 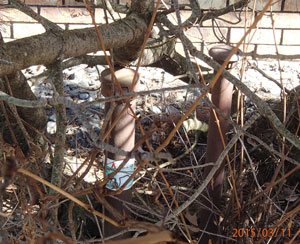 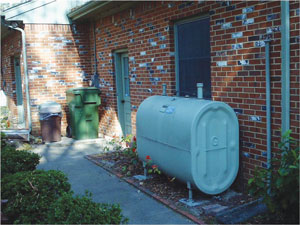 Most inspectors would focus on the oil tank, understandably. However, to the right of the oil tank, you can see an extra vent pipe coming out of the ground and extending above the top of the tank. This vent line was for a buried oil tank that has been abandoned and replaced with the above-ground tank we can see.

You might also wonder from this photo whether the tank is sitting on a solid pad.

This is a good example of the importance of taking both a micro and macro approach to home inspection. While you spend most of your time looking at the evidence in front of you, and seeing what you expect to see, you also need to stop, clear your mind, step back and let the house tell you its story. What's unusual? What's missing? What's there that shouldn't be there? These are the things that don't show up on checklists, but are identified by the home inspector who is a true professional consultant.

Kevin O’Hornett, a respected source, refers to spotlight and floodlight rather than micro and macro. 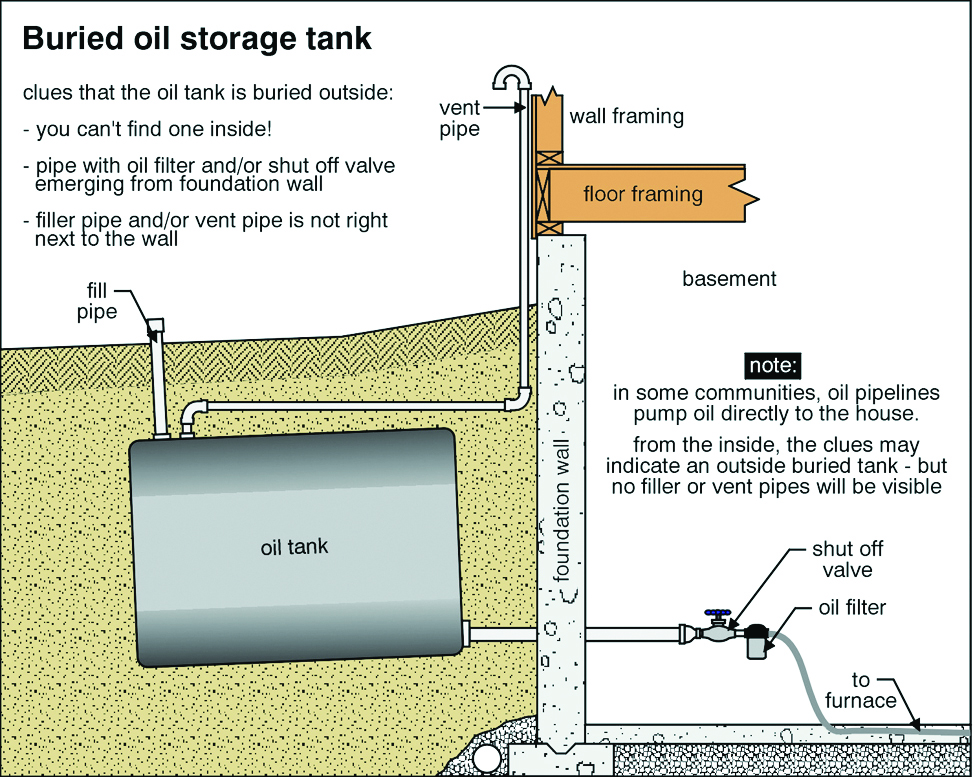 Some neighborhoods were built with underground oil supply lines, similar to the natural gas distribution network, but on a smaller scale. In these areas, the fuel line comes in through the foundation wall, usually near the furnace. You can recognize these by the absence of a tank and the presence of a meter and a shut-off valve on the piping where it enters the house. Many of these systems have been abandoned in areas where natural gas has become available. It's easy to look at this and mistakenly report a potential buried oil tank.

What to put in Report

Where you have reason to suspect a buried oil tank, you might say, “Possible buried oil tank on the property, based on the apparent fill and vent pipes noted (or whatever evidence you saw). Further evaluation by a specialist is recommended to determine whether there is a tank and/or contaminated soil, which may be a high-cost issue.”

We have looked at oil tanks and outlined some of the common problems, including buried tanks. More information can be found in the ASHI@HOME training program.