Working for FEMA in the Aftermath of a Devastating Tornado

It filled the local TV newscast and papers for days. Texas was on fire!

Several years of a persistent drought left a bitterly dry rangeland that had ignited to create wildfires of unimaginable proportions. Ultimately, 1.8 million acres would burn and whole towns had to be evaluated because of the fire and smoke. Little did people realize that this was setting the stage for a disaster that would tear at the heart of the nation.

The smoke from the fires that were fanned by a constant 40-MPH wind from the south combined with Gulf moisture over Dallas and collided with a late spring Canadian cold front that was sliding south over Oklahoma to create a line of superstorms that would ravage several states. The 200 tornados in this line of storms destroyed entire towns and affected hundreds of thousands of lives. 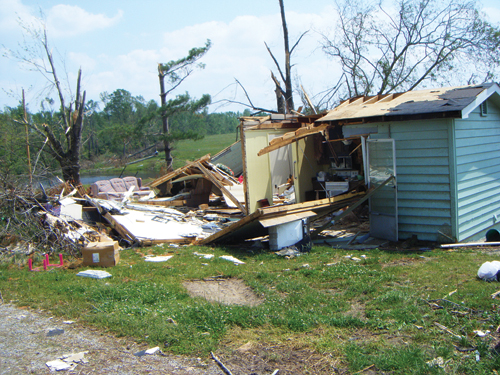 Photo above: Eight people were huddled in this house in Ider, Ala. and all lived.

Photo above: The next five houses down the street looked like they exploded. (Ider, Ala.) 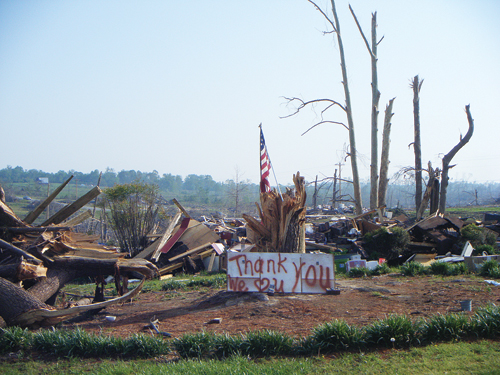 Photo above: People came to help clean up the mess, and the
homeowners  put up the thank you sign and flag. (Ider, Ala.) 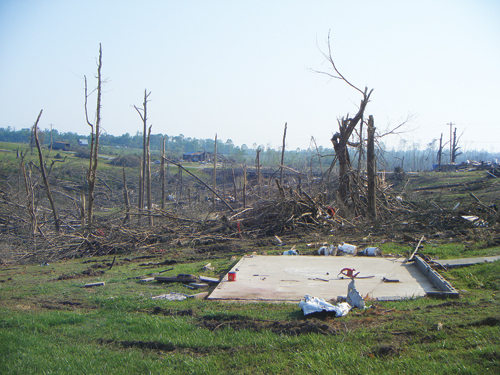 Photo above: This house was lifted off the foundation and thrown about 300 feet down the hill. The neighbors pulled the homeowner from the destroyed house and took her to the hospital. She is ok, but badly bruised. (Ider, Ala.)

Tornados are rated on a scale that describes their wind and destructive intensity. The Fujita scale runs from F1 to F5. The higher the number, the more destructive the power of the tornado. Of every 100 tornados, experts believe that perhaps 1 percent will reach the F4 or F5 level. An F5 tornado can carry winds up to 318 MPH and be up to one mile wide. An F5 tornado turns a car into a missile that can be thrown over 300 feet. It will completely destroy anything and everything in its path.

This line of supercell thunderstorms contained up to 50 percent of F5 tornados in some locations as it cut a path of destruction hundreds of miles long through parts of Alabama and Arkansas. Destroying entire towns in its wake, one tornado cut a path over 80 miles long and up to a mile wide as it chewed up countryside, homes, businesses and the power transmission lines of northern Alabama. Even though some of the tornados missed houses, millions of people lost power for 5-6 days and some still do not have power weeks after the storm.

The most severe storms hit in the early evening as people were getting off work and going home. People were warned in advance and most took shelter, but where do you go when nowhere is really safe? Hundreds were killed, thousands of homes were destroyed and everyone's life in the area was inalterably changed on that evening. The national news announced the devastation the next morning on Thursday, April 26. News crews were on site by Friday, and the nation saw the horrific images Friday evening and Saturday morning. A federal disaster was declared on Saturday and FEMA was ordered to start moving resources to the area.

I received a call late Sunday asking if I was able to be deployed to the area to perform FEMA inspections. I had to make a decision to leave the comfort of my home and business to help the hundreds of thousands in need.

I had been deployed for 45 days along the Gulf Coast after Hurricanes Gustav and Ike. It was an experience that I shared with ASHI members in several articles back in 2009. It was a tough, emotional journey, one I was not sure I could endure again. But, when the call came, I knew that I was needed, and this was something I had to do.

With the support of a tearful wife, I cleared my inspection schedule and went back on the road with FEMA. My prior experiences left me better prepared for this deployment, but nothing could prepare me for what I was about to see and experience.

Beauty and devastation side by side

I've found myself driving through beautiful countryside, then coming around a corner to total destruction. Every leaf gone from the trees, the trunks shredded, every structure gone, nothing but a field of debris.

I inspected a house with a beautiful view from the back yard. It was refreshing to see something green and normal, so I took a picture to lighten my heart. Yet, I knew there was a path of destruction in the far distance that went down one side of the mountain, across the valley and up the other side of the mountain.

Photo above: Not all areas were destroyed. This photo is of the Chatanooga Valley in Higdon, Alabama. Hemsell said, "I inspected a house that had this view from its back yard. It was refreshing to see something green and beautiful, so I took this picture to lighten my heart. There was a path of destruction in the far distance that went down one side of the mountain, across the valley and up the other side of the mountain, but it's not visible in the picture."


In the midst of all this destruction, it has been heartening to see people responding like the congregation I saw holding a worship service on Sunday morning outside its badly damaged church in Henagar, Alabama. The sign reflected their spirit. It read: Bruised But Alive: Relocating Soon. The other side of the same sign announced the funeral services for a member who had died.

Photos above : A church in Henagar, Alabama.  The sign is in front.

Photo above: From Rainsville, Alabama. This shows the damage caused by not fully closing a garage door when a tornado is coming. It blew out the side of the garage wall and then the second floor collapsed.

I'll continue to share my experiences next month. Until then, please keep the people in Alabama in your thoughts and prayers because what happened truly changed their lives.

There is abundant information on how to design a house to prevent or lessen damage from a hurricane. Although there are suggested designs for tornado-resistant housing, in-residence shelters often are recommended to protect occupants, but only for houses that are outside of flood-zone and storm-surge areas. Safe rooms for those who live in mobile homes can be constructed adjacent to the home on a permanent concrete foundation.

According to FEMA, a safe room is a specially designed room to protect people from tornadoes and violent storms. Safe rooms generally are small rooms heavily reinforced with steel and/or concrete to withstand severe weather events. Safe rooms come in various sizes, designs and materials. 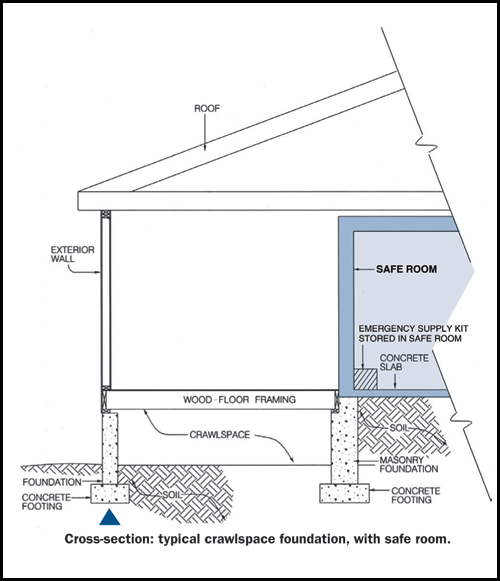 Lower-cost, easier-to-install safe rooms often are made of steel and can be placed in existing rooms, basements or attached to the outside of a home. More elaborate designs are incorporated into reinforced basement walls and are constructed out of a combination of steel and concrete. Some safe rooms are prefabricated and are transported directly to the home to be installed, with little construction by the homeowners necessary.

Because safe rooms have shown to save lives during a tornado, FEMA has made several designs available to guide the construction of a safe room. Also, several state and federal agencies offer small grants to subsidize the cost of construction.

For a fact sheet on tornadoes, go to www.aegweb.org/files/public/tornadofactsheet0606.pdf.