Home inspectors need to be aware of a relatively new non-frost-free outdoor faucet with an integral vacuum breaker called the Arrow-Breaker faucet, made by Champion-Arrowhead, Los Angeles, CA (http://champion-arrowhead.com/). Note: Other commonly used terms for an outdoor faucet include lawn faucet, sillcock and hose bib. 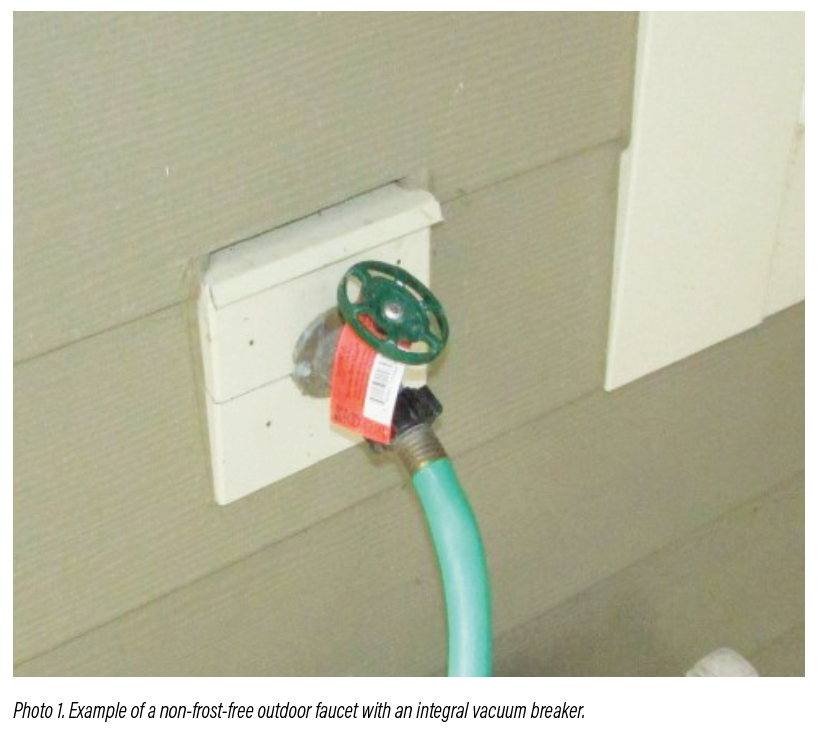 Because it has an integral vacuum breaker, the Arrow-Breaker faucet has taken over the non-frost-free faucet market, at least for new construction, where I live in Minnesota. The most obvious identifying characteristic is the orange tag that comes attached to the faucet stem (Photo 1). 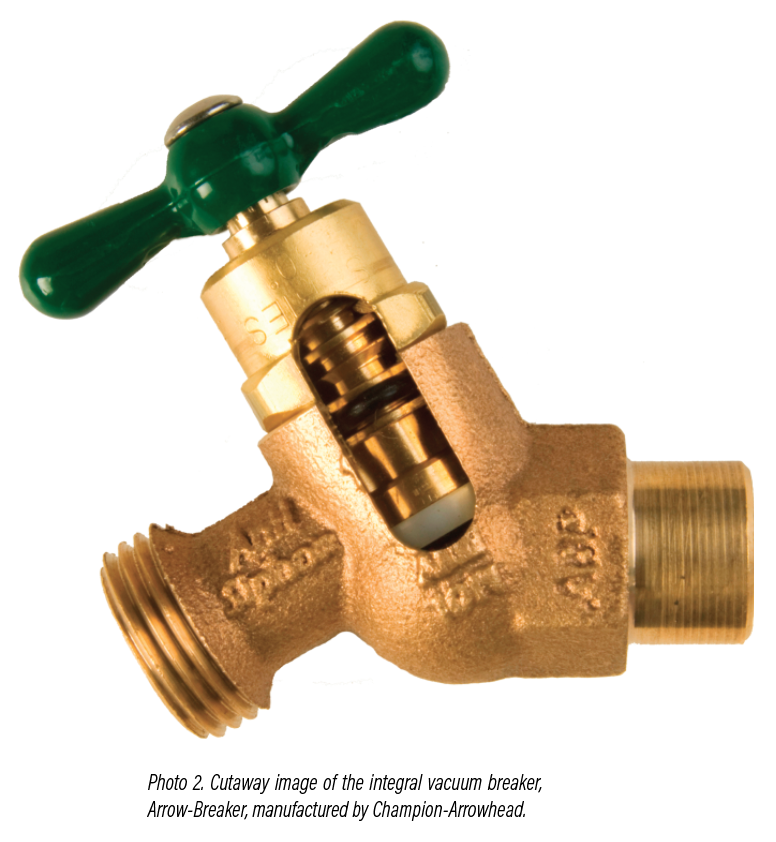 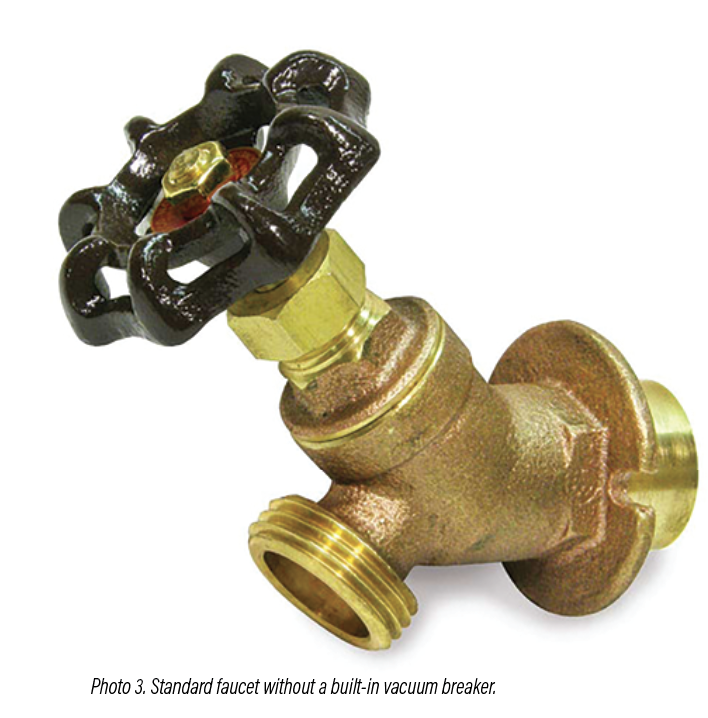 It is important to note that the Arrow-Breaker faucet is not the only non-frost-proof faucet with an internal vacuum breaker; however, it is the only one that seems to have made its way to Minnesota. I learned that Woodford Manufacturing also makes a product that looks identical to every other frost-free faucet that I’ve ever seen, complete with the distinctive mushroom cap at the top (Photo 4). By the way, I learned about the Woodford product after I submitted this article to the ASHI Reporter (Thank you, Technical Review Committee!). You can search the internet for “Woodford 101” to learn more information about this product. 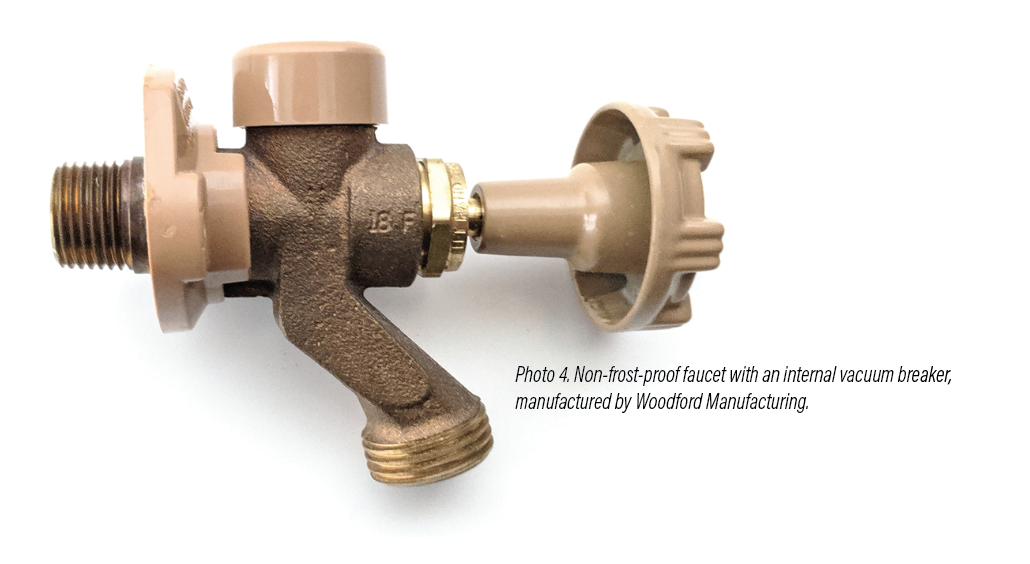 The most important thing to know about these faucets is that there is no need for an external vacuum breaker, a device designed to help prevent cross-connections.

For more information on vacuum breakers and cross-connections, refer to Kenny Hart’s article, “More Straight Talk About Cross-Connections,” published in the August 2006 issue of the ASHI Reporter (http://www.ashireporter.org/HomeInspection/Articles/More-Straight-Talk-About-Cross-Connections/932).

Another important thing to know about these faucets is that it might be difficult to winterize them. (Note to inspectors who live in southern climates: You can stop reading this article now unless you are interested in what your home inspector colleagues in the northern regions of the country need to know.)

As you probably already know, there are two possible ways to winterize an exterior faucet:

With an Arrow-Breaker faucet, this can’t happen. The integral vacuum breaker prevents air from getting into the faucet. I’ve emailed the manufacturer about this and they were somewhat baffled. They said that the only way to get water to drain out of the pipe with these faucets would be to use a wrench on the flats of the bonnet to take it apart, thus allowing air into the pipe (Photo 5). 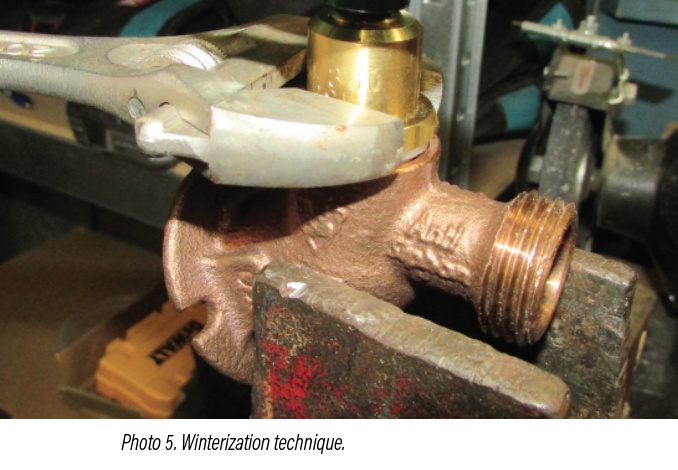 Of course, that got me thinking about external vacuum breakers and the same applies to those; In their normal state, they also won’t allow air into the pipe to replace water. They need to either be removed in the fall or manipulated to allow air in to replace the water. The good news is that on most new installs, the Arrow-Breaker faucet will be installed below the interior shutoff valve so there won’t be any problems.

Other resources: How to prevent your outside faucets from freezing, by Reuben Saltzman (http://structuretech1.com/how-to-prevent-outside-faucets-from-freezing-2/).

Consider using this language in your home inspection report: