Two Views from the Inside of the MRC: Part 1 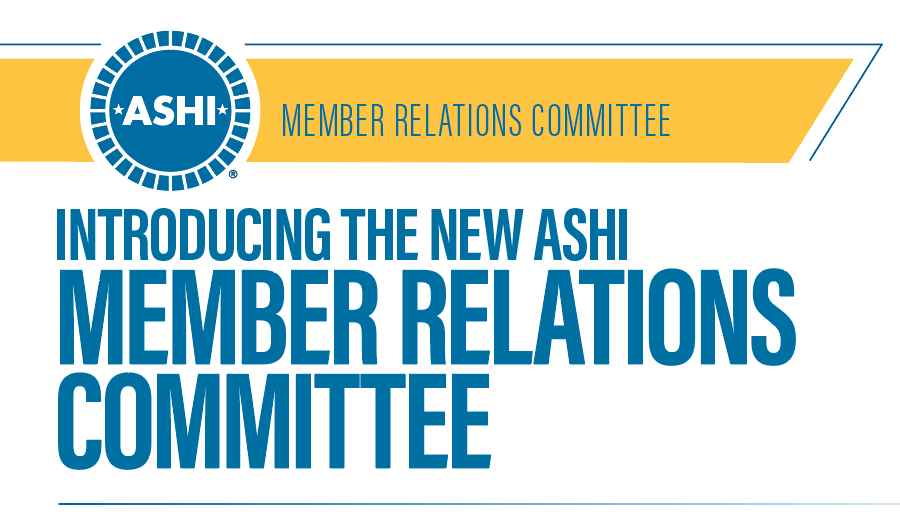 By the time you read this article, the inaugural Member Relations Committee (MRC) has been seated and is hard at work planning their activities. Many of you likely received solicitations to join this new and important committee. I hope you took some time to consider completing the application or, even better, applied to be a part of it.

So, how did we get here and what’s the MRC all about? Well, it started with the recent adoption of amendments to ASHI’s Bylaws. The Council of Representatives (CoR) was discharged after many years of valuable service to ASHI. The COR was used as a vetting process for our Directors, listened to the concerns of the ASHI membership through selected representatives, carried information from ASHI leadership back to the chapters and allowed for the CoR Speaker to be an invited guest of the ASHI Board of Directors.

The Bylaws now allow for a larger, more diverse pool of potential candidates who wish to seek positions like Officer or Director on ASHI’s Board, and better communication between members, staff, the Board and chapters. Communication has become far more efficient than the days when the best technology we had was a fax machine!

The Bylaws also mandated the formation of the MRC as a standing committee of ASHI. The purpose of the MRC is to make recommendations to the Board regarding membership requirements, membership value, chapter relations and legislative relations. The MRC is to be led by a chairperson selected by and from within the MRC. The chairperson will be an invited guest on the ASHI Board of Directors. The MRC may include 12 to 30 voting ASHI members. The MRC will encompass the previous roles and replace the Chapter Relations, Legislative and Membership Committees.

When the ASHI Board decided to implement and establish this new MRC, its first step was to develop a plan to staff and guide it. To accomplish this, then-President Scott Patterson formed a task force chaired by Brendan Ryan and staffed by Dale Shriver, Steve Cross and me, with assistance from Assistant Executive Director Mike Rostescu.

Our first task was to formulate guidelines to help the new committee staff and manage itself. We felt this was important, so once the initial committee members were seated, they could begin work on the needs of the membership rather than using time and resources to plan their own governance. We developed a document to establish their internal governance and structure, but allowed enough room for them to adjust their procedures as the committee grows and develops.

Once we a had a workable plan in place, we presented it to the ASHI Board of Directors at its January 2019 meeting at InspectionWorld®. By vote of the Board, our task force was established as a Special Committee to allow us certain authority to move forward. We also held an informative meeting and workshop at IW, which gave us an opportunity to hear feedback from members and for us to explain where we were in the process.

The final step was to seat the initial committee. We developed and distributed applications for interested members, and we were happy to see that so many members were interested in serving ASHI! The Special Committee decided to seat 12 members for the initial MRC. This number would allow complete latitude to the MRC to decide if they needed more members moving forward. From the applications we received, we were interested in developing a diverse committee whose membership would include veteran and newer members, sole proprietor and multi-inspector groups, chapter members and nonchapter members, as well as those with specific talents in areas such as chapter relations, legislation and member value ideas.

Once the MRC is fully functional, our Special Committee will dissolve, and we will all sit back and see where this goes—this process has been very much like planting a seed and watching it grow!

The responsibilities of the MRC will be great. All of us who served on the Special Committee understood the importance of our work. With Brendan’s guidance, we worked efficiently and without outside influence to accomplish our goal. We believe, collectively, that we produced a workable plan with which the MRC can commence. We are confident that we selected the best candidates for the MRC and we hope that you, the members, are satisfied with the membership of the MRC.

If you submitted an application but were not selected, do not fret! We limited the first year of the MRC to a certain number of available positions, but the MRC will retain all of the applications received so far to continue to staff the MRC as needs dictate.

ASHI, Up to Speed (Overview & introduction to the new MRC)

THE CREATION OF THE MEMBER RELATIONS COMMITTEE — TWO VIEWS FROM THE INSIDE: Part 2

Kevin Vargo, ACI, has been an ASHI member since 1998. He is General Manager of H&J Freile Home Inspection, Inc. He is a Past-and current President of the Garden State Chapter, is Chair of the ASHI Complaints Committee, is a member of the ASHI Certification Committee (ACI) and continues to serve on task forces. He is the recipient of the John Cox and Philip Monahon awards.