By Bruce Barker | January 01, 2012
Once again, The Word invites you to travel into the dark realm of issues that are sometimes misunderstood by home inspectors. The Word hopes you will find this trip informative and maybe a little entertaining.

The Word's subject this month is venting gas appliances using a chimney. The Word finds this subject interesting because this is a common situation in some areas and because inspectors may find this subject confusing.

A chimney often is built to serve something (like a wood-burning fireplace or an oil-fired boiler) that produces a greater volume of combustion gasses at a higher temperature compared with gas appliances. Thus, the typical chimney flue has a much greater area than the typical gas vent.

An exposed chimney is one that has any side of the chimney exposed to the outside below the roof line. The chimney is exposed if even one side runs along an outside wall. A chimney that serves as a vent for a gas appliance may not be exposed. Look at the chimney when evaluating a chimney that serves as a gas vent. The chimney must be entirely enclosed within the four walls of the home until it enters the attic; otherwise, the system may not work properly and should be evaluated by a qualified engineer. Exposed chimneys may not get hot enough to maintain a draft, resulting in backdrafting, condensation or both.

Be careful to distinguish the situation above from the situation where a vent (such as a Type B vent or a chimney liner) runs inside the chimney. In this case, the chimney serves as a chase for the vent, not as the vent.

Appliances that may use a chimney as a vent

The simple rule for determining when a chimney may serve as a gas appliance vent is when the chimney serves as a:

1) common vent for two or more draft-hood-equipped or induced-draft appliances; or as a

2) vent for one draft-hood-equipped appliance.

A chimney may serve as a vent for other types or configurations of gas appliances, but these other types or configurations must comply with manufacturer's instructions or they may need to be engineered. When you see a chimney serving as a vent that does not comply with 1 or 2 above, it's not necessarily wrong; however, it might be. You may wish to call for further evaluation, particularly if you see evidence of venting problems.

One method for determining the correct chimney flue size is to use the IRC tables in Section 2428. This method must be used when common venting two or more gas appliances. There is an easier method if you are venting one draft-hood-equipped gas appliance.

Remember, too, that rectangular flues are not really rectangles; they are rounded rectangles. Their area is smaller than a full rectangle. There are tables in the IRC that show the area of common-sized round and rectangular fireclay flues. 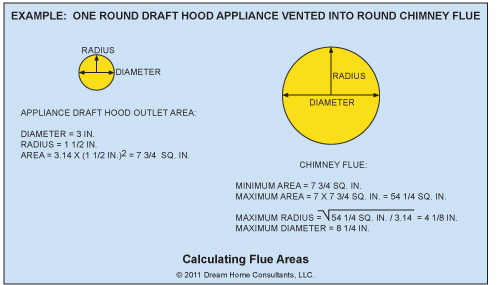 Vent connectors should be securely attached to the appliance draft hood or flue collar, and joints in the vent connector should also be securely attached to each other. Attachment means sheet metal screws (usually 3) or other approved materials such as the manufacturer-supplied locking mechanisms of Type B vents. The vent connector should slope up toward the chimney at least ¼ inch per foot and should be adequately supported.

As is true for all common venting systems, where two or more vent connectors enter a chimney, the smaller connector should connect to the chimney above the larger connector. 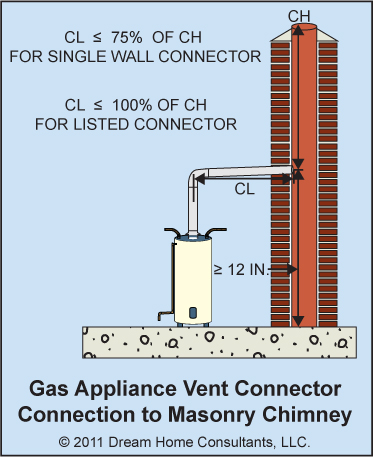 Also note the number of elbows in a vent connector. Any combination of elbows that totals more than 180˚ may be a problem because of the resistance to gas flow caused by the elbows. Evaluation by a qualified contractor may be wise in such cases.

A chimney can be a low-cost and convenient venting system for gas appliances and the system can work if properly designed, installed and maintained. The problem is that these systems often are not properly designed, installed and maintained. The Word hopes that you now have a little better idea about how to inspect such systems.

Memo to Vulcan and the other fire gods: The Word does not reside on Mt. Olympus (just at its base) and welcomes other viewpoints. Send your lightning bolts or emails to inspectorbruce@cox.net. The thoughts contained herein are those of The Word.  They are not ASHI standards or policies.