By Bruce Barker | May 01, 2009
With gratitude and an apology to Stephen Colbert, we continue an occasional column about words we use as home inspectors. We discuss words that are sometimes misused or misspelled. This column won’t be as funny as the Colbert Report, but The Word hopes you will find it informative and maybe a little entertaining. 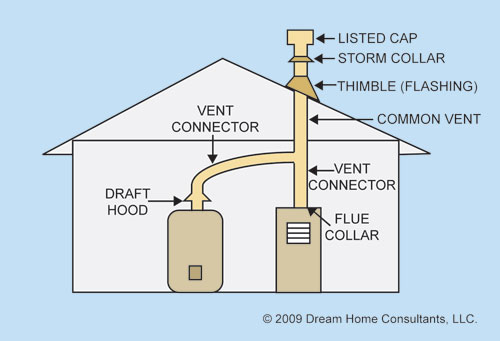 Another common, but confusing, use of the word vent involves clothes dryers, kitchen range hoods and fans used in bathrooms and laundry rooms. These components are exhausted, not vented, and The Word recommends using terms such as clothes dryer exhaust duct, kitchen exhaust hood and bathroom exhaust fan. As an example of the potential confusion between the words vent and exhaust: Does the term laundry vent mean clothes dryer exhaust duct or does it mean laundry exhaust fan duct?

A word that is related to vent and is often used in place of vent is the word flue. Flue and vent describe similar components, but the words are not synonyms, so you should not use them interchangeably. For clarity and consistency, The Word recommends that you use the word vent when describing gas- and liquid-fuel-burning appliances and that you use the word flue when describing solid-fuel-burning appliances and chimneys. The terms flue vent and vent flue are redundant and you should not use them. The Word’s recommended uses are consistent with the International Residential Code (IRC), although even the IRC is not completely consistent.

Applause, and cut to a commercial for Simpson (they make vents, too, under the brand Dura-Vent).

Memo to the Plumbing and HVAC Gods and other authorities: The Word does not reside on Mt. Olympus and welcomes other viewpoints. Send your lightning bolts or e-mails to inspectorbruce@cox.net. Please cite the authoritative references that support your position. Note that all references are not considered authoritative. Unless you are fortunate enough to have a Resident Librarian, as The Word does, consult your local reference librarian. We will continue this discussion, if warranted.