By Bruce Barker | April 01, 2010
Once again, The Word invites you to travel into the dark realm of terms that are often misused or misunderstood in home inspection reports. The Word hopes you will find this trip informative and maybe a little entertaining.

Today The Word pokes his head into the attic to look at some roof framing terms. The Word selected these terms in a moment of nostalgia for the days when, as a member of that questionable class of beings known as home builders, he designed his own roof systems. Upon becoming enlightened (a home inspector), The Word found a new appreciation for these terms.

A valley rafter, as its name suggests, is a rafter that supports rafters in a roof valley. A common, and sometimes problematic, roof valley is where a roof is constructed and sheathed and an upper roof is built over the lower roof. If the upper roof is built using dimension lumber (often called fill-in rafters in a truss roof system), the upper roof valley jack rafters must either bear directly on the rafters or trusses below or must bear on a valley rafter placed on top of the sheathing. At least 1-½ inches of the thickest area of the valley jack rafter’s seat cut should bear on the support. Rafters should not bear on unsupported sheathing. 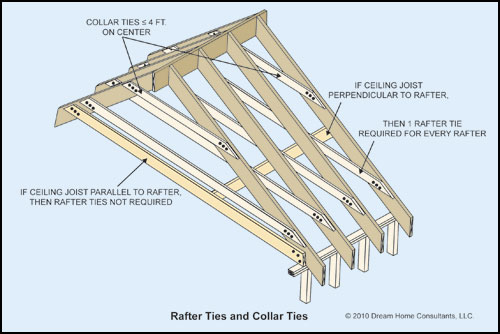 Most modern homes use oriented strand board (OSB) or plywood for roof sheathing. Fastener type and placement are important aspects of sheathing installation, although you will rarely be able to see them. OSB and plywood roof sheathing around ½-inch thick requires 8d common nails spaced 6 inches on center around the edges and 12 inches on center at intermediate supports. High-wind areas require more fasteners. Other approved fasteners may be used. Note that common nails and gun nails are usually not equivalent. 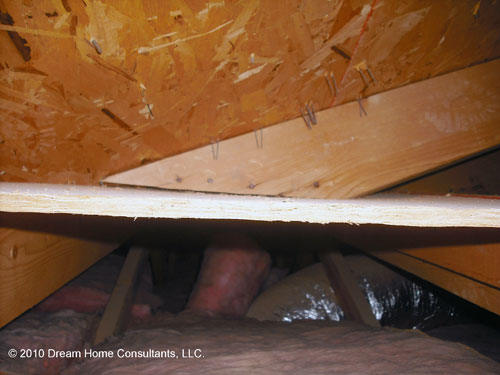 Photo: A rafter bearing on OSB (Oriented Strand Board). 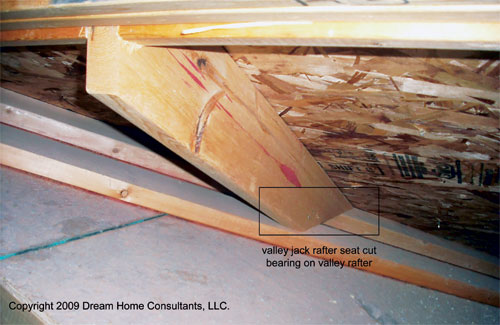 Two other important aspects of sheathing installation are panel width and edge gaps. Panels should be at least 24 inches wide across two supports.

Anything less may be structurally unsound. The Word often sees narrow width panels at ridges. All edges should have a 1⁄8-inch gap between panels. This allows for expansion of the panels if they become wet.

A purlin supports rafters and allows the rafters to span a greater distance than otherwise allowed. A purlin is not required if the rafter span is within allowed limits for the species and grade of wood used. Rafter span is measured horizontally from the top plate or other support to the ridge board or other support, not along the length of the rafter. 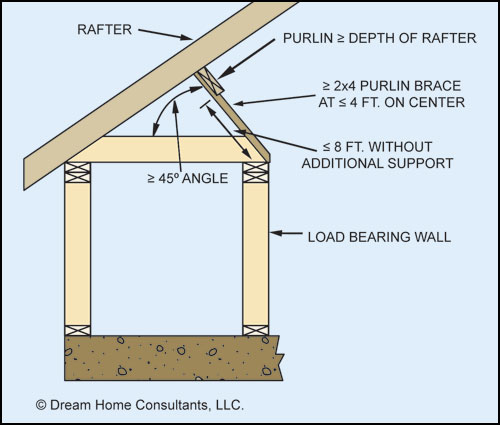 The purlin is usually a piece of dimension lumber that is at least the same dimensions as the rafter it supports. Example: a 2" X 6" rafter requires at least a 2" X 6" purlin. The purlin should be continuous between rafters, placed so the long dimension is perpendicular to the rafter, and supported by at least a 2" X 4" brace attached to a load-bearing wall. The brace should be doubled if its length exceeds 8 feet and the distance between braces should not exceed 4 feet. The brace should not be at an angle less than 45 degrees to horizontal.

Collar ties are installed in the upper one-third of the attic space to help resist wind uplift. They may also help resist lateral thrust of the rafters against the supporting walls. The collar tie should be at least a 1" X 4" spaced not more than every 4 feet. It should be nailed to the rafter using at least three 10d common or box nails. These specifications apply to most homes. You should refer to local requirements in high-wind areas, when the roof pitch is less than 3⁄12 and when the roof span is greater than 36 feet.

When ceiling joists and rafters are parallel, the ceiling joists provide the primary resistance to the lateral thrust of the rafters against the supporting walls. When these components are not parallel to each other, rafter ties are often required. One rafter tie connects each rafter to its corresponding rafter on the other side of the roof. The rafter ties should be at least a 2" X 4". Current nailing requirements involve 16d common nails, the quantity of which is specified in a table based on roof pitch, roof span, rafter spacing and snow load. Between three and eight nails will usually suffice for most applications. Manufactured connectors are usually allowed, with approval by an engineer or local officials.

The Word misses the days when real men built real roofs using real lumber. Trusses are probably better, but there’s little skill involved in placing trusses where the plan says to. The Word hopes that when you see real roofs built using real lumber, you will understand a little more about what you see.

Memo to the framing Gods and other authorities: The Word does not reside on Mt. Olympus (just at its base) and welcomes other viewpoints. Send your lightning bolts or e-mails to inspectorbruce@cox.net. The musing contained herein is that of The Word. It is not ASHI standards or policies.