By Bruce Barker | May 01, 2011
Once again, The Word invites you to travel into the dark realm of terms that often are misused or misunderstood in home inspection reports. The Word hopes you will find this trip informative and maybe a little entertaining.

As usual, The Word uses the 2009 International Residential Code (IRC) as the primary reference for this column. Local regulations and interpretations may vary. Remember that home inspections aren't code inspections. The Word does not discuss topics in depth, so you may want to look for more information from other sources if you're interested in today's term.

The Word's term today is habitable rooms (called habitable spaces in the IRC). The Word finds this term interesting because the term is used in many places, including ASHI standards, but many people don't know what it means.

What is a habitable room and why does it matter?

Let there be light

Let there be fresh (or what passes for fresh) air

Ventilation can be an issue in areas such as attics and basements that have been converted into habitable rooms. Habitable rooms should have outdoor ventilation openings, such as an operable window, with a ventilation area equal to at least 4 percent of the room's floor area.

Don't box me in

Habitable rooms should have a ceiling height of at least 7 feet. The 7-foot ceiling minimum height also applies to hallways, to bathrooms and to laundry rooms. The 7-foot minimum ceiling height applies regardless of where the rooms and hallways are located in the home, including attics and basements.

The 7-foot minimum ceiling height is measured between the finished floor and the lowest projection from the finished ceiling. Projections include beams, joists, ducts and pipes, but do not include light fixtures and ceiling fans. This doesn't mean that the ceiling height must be 7 feet throughout the entire room. Sloped ceilings and furred-down ceilings are allowed. 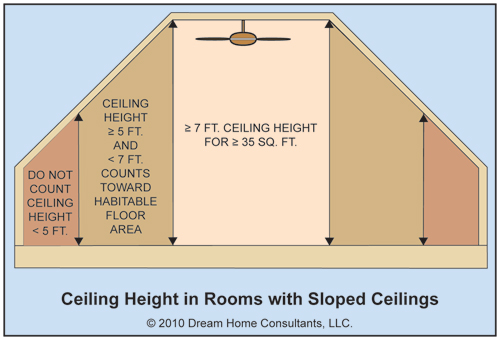 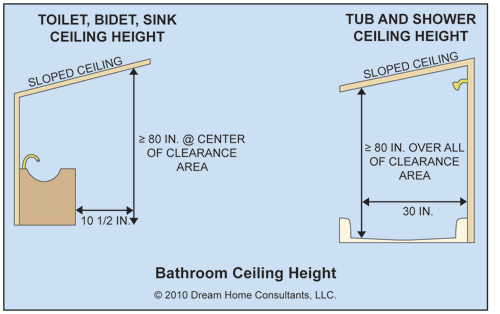 Homeowners are very creative about adding "living space" to homes and listing agents are very creative about how they describe these rooms. It's definitely not our job as home inspectors to dispute this creativity. But when safety, convenience or habitability is involved, we may want to alert our clients to the possibility that these spaces may not satisfy all of their expectations. Whether and how you do this is your call.

Memo to the creativity muses: The Word does not reside on Mt. Olympus (just at its base) and welcomes other viewpoints. Send your lightning bolts or emails to inspectorbruce@cox.net. The thoughts contained herein are those of The Word. They are not ASHI standards or policies