By Bruce Barker | April 01, 2012
Once again, The Word invites you to travel into the dark realm of subjects that are sometimes misunderstood by home inspectors. The Word hopes you will find this trip informative and maybe a little entertaining.

The Word's subject this month is electrical cable installation deficiencies. The Word finds this subject interesting because although these deficiencies may not be big deals by themselves, they often indicate unprofessional and un-permitted work. Often, such work involves hidden deficiencies, and you may wish to alert your client to both the visible and possible hidden deficiencies.

What's in a name?

What many call electrical wire is really some form of electrical cable, which is two or more conductors contained within an outer covering. Non-metallic sheathed cable (NM) is the most common form of electrical cable in modern homes, and the rest of this column will deal with NM cable. Many, but not all, of the rules that apply to NM cable also apply to underground feeder (UF) cable and to armored cable (AC). We'll use the term cable to describe all three wiring methods unless we need to reference a specific cable type.

UF cable is similar to NM cable. The most important difference between them is that UF cable has a solid water-resistant sheathing that makes it suitable for direct burial. AC is cable with a thin, flexible metal jacket. AC is often referred to as BX. BX is a brand name for the original version of AC that was invented near the turn of the last century. General Electric owns the BX brand.

Just as BX is a brand name often used to describe AC, Romex® is Southwire's brand name for NM cable. It's not a good idea to use brand names in reports to describe components unless you are certain that the component is that brand. You should use generic terms such as NM cable and AC instead. You wouldn't want to violate somebody's copyright.

Cable may not be installed where it is subject to physical damage. Damaged cable is both an electrical shock hazard and a fire safety hazard.

Examples of exposed areas where cable could be damaged include areas within easy reach such as along finished walls and floors, inside cabinets, and in exposed framed walls, such as walls in attached and detached garages. But what about exposed areas that are not within easy reach? And what about cables run in exposed basement walls and in basement and crawl space floor joists? These situations require a judgment call.

Cable may be run exposed if it isn't subject to physical damage, so cable run high on interior walls may be OK, but cable run high on garage walls may not be as safe because people are more likely to use tools with long handles in a garage. The Word calls for repair of all exposed cable attached to finish materials on the theory that the client is always free to ignore the recommendation if he believes that the installation is safe.

Cable may be run parallel to floor joists in basements and crawl spaces without protection if the cable is at least 1 ¼ inches from the joist edge. This also applies to ceiling joists and rafters in the attic. Cable containing #10 and smaller wires may not be secured directly to the bottoms of floor joists in basements and crawl spaces. It may be installed on a running board, which is often a piece of 1-inch thick wood installed perpendicular to the joists. Cable containing two or more #6 wires or three or more #8 wires may be secured to floor joist bottoms without additional protection.

Protection may be required for cable run on surfaces of ceiling joists and rafters depending on how the attic is accessed. For attics accessed through a scuttle hole or a door, cable protection is only required within 6 feet horizontally and 7 feet vertically from the opening. For attics accessed by permanent stairs (possibly including a pull-down ladder), cable protection is required for all cable run on the surfaces of ceiling joists and rafters for 7 feet vertically from the ceiling joists.

Figure 1 (below) shows this requirement. Protection should consist of "substantial guards" that are at least as tall as the cable. 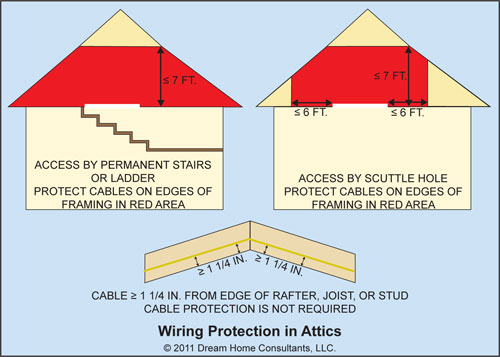 A common mistake by inexperienced installers is NM and UF cable bends with a very tight radius. Tight radius bends can damage the cable sheathing and the conductors inside. Over time, this can cause an arcing fault and a fire. Try bending a wire several times at one point. It's one way to cut wire if you don't have your wire cutters handy. An NM or UF cable bend should not be smaller than five times the diameter of the cable.
Figure 2 shows this requirement and Photo 1 (both below) shows an example of a tight radius bend. 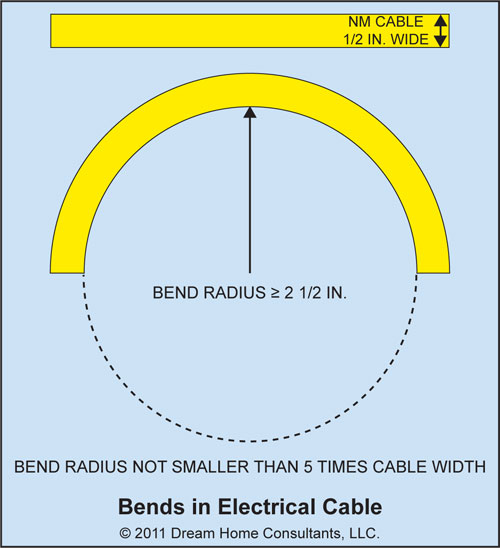 
The general rule is that any bend in any wiring method shouldn't damage the wiring method. The specific rules about the bending radius of other wiring methods are too complex to discuss here. You may want to call for further evaluation if you see bends in conduit, tubing or individual wires that look too tight.

Another common mistake by inexperienced installers is failing to properly terminate cable in boxes. Improperly terminated cable can move, scraping off insulation or working connections loose, causing arcing and a fire. Cable should enter any box with intact sheathing; no visible wires are allowed. 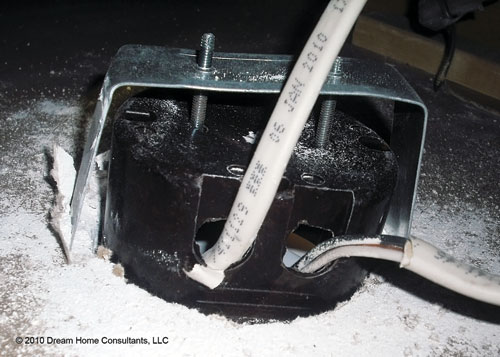 Cable should be supported at least every 4 ½ feet. Again, this is to relieve stress and restrict movement that can damage the wire, resulting in arcing and a fire. Support does not necessarily mean that the cable needs to be stapled or otherwise secured. Cable run through holes in framing is considered supported. Cable run on top of ceiling joists in attics is considered supported by some jurisdictions, but in other jurisdictions it must also be secured at least every 4 ½ feet.

Cable should be secured (usually stapled) within 8 inches of boxes without cable clamps (which includes most smaller plastic boxes) and within 12 inches of boxes with cable clamps (which includes most metal boxes and larger plastic boxes). All boxes and other termination points, such as light fixture boxes, recessed lights, ceiling fan boxes and cabinets, are covered by this requirement. It's common to see this requirement ignored by amateur electricians. Look for this in attics where fans and lights have been added. Movement of unsecured cable can cause loose connections, arcing and fires.

Damp areas mean areas not subject to direct liquid exposure, but that may be subject to moderate moisture. Damp areas include under eaves and covered porches, and may include some basements and crawl spaces and some auxiliary buildings such as barns and work sheds.

NM and AC may be run inside masonry voids if the masonry is above grade and will remain dry. UF cable is intended for wet areas and may be run in wet or damp areas as well as direct burial (if buried deep enough).

The deficiencies we discussed in this column may have existed for years, even decades, without causing a problem. The odds are good that they never will cause a problem except when they appear in your report. The Word will usually let an absent wire staple slide, but when these deficiencies are numerous or when they look like evidence of amateur work, The Word might become a little more inclined to report them. You will need to make your own call.

Memo to the electrical gods: The Word does not reside on Mt. Olympus (just at its base) and welcomes other viewpoints. Send your lightning bolts or emails to Bruce@DreamHomeConsultants.com. The thoughts contained herein are those of The Word. They are not ASHI standards or policies.

Bruce Barker, Dream Home Consultants, Peoria, Ariz., has been building and inspecting homes since 1987. He is the author of "Everybody's Building Code" and currently serves as chair of the ASHI Standards Committee. To read more of Barker's articles or if you need a presenter at your next chapter event, go to www.dreamhomeconsultants.com.