Once again, The Word invites you to travel into the dark realm of issues that are sometimes misunderstood by home inspectors. The Word hopes you will find this trip informative and maybe a little entertaining.

Let's briefly review what we discussed last time. A deck stairway is no different from any other stairway in terms of riser height, tread depth, landings, handrails and guards. This makes basic deck stairway inspection easier.

Support posts for deck guards and stair guards should be attached to the deck using attachment devices that are attached to deck joists using bolts and washers.

Attach deck joists to deck ledgers using approved joist hangers installed according to manufacturer's instructions. The joist hanger should be the right size for the joist. For example, a 2x6 joist hanger usually should not support a 2x8 joist, although this may be allowed under some conditions. Manufacturer supplied joist hanger holes should be filled with an appropriate fastener as specified by the manufacturer. Some holes are used for specific purposes and may not need a fastener in some situations. Joist hanger manufacturers have specific recommendations about appropriate fasteners, and these recommendations may not include some gun nails. Don't forget to look for incompatible fastener and hanger materials such as galvanized fasteners and stainless steel hangers.

Attach deck joists to beams using three 8d-deformed-shank nails toe nailed, an approved attachment device or a joist hanger. The nailing method is recommended only when the deck ledger is attached to the home.

The rim-joist-to-deck-joist attachment used to be just another attachment; no longer. The outside deck floor board should be attached to the rim joist using either 10d-deformed-shank nails or #10 wood screws at 6 inches on center. The outside rim joist should be attached to the deck joists using three of the same fasteners per joist (see Figure 1). 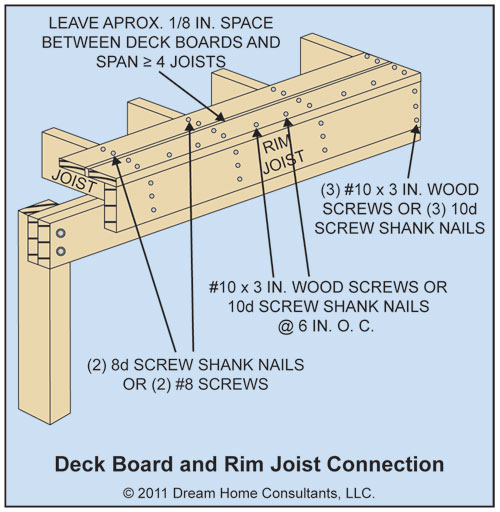 In the old days we used wood 4x4 posts to support decks. This is still allowed by the IRC, but 4x4 posts are not recommended, particularly for tall decks. Three inch or larger steel columns are allowed if they have a shop-applied, rust-resistant coating on both the inside and outside.
Remember to check that all posts are adequately anchored at both the top and the bottom. A manufactured-post base attached to or embedded in the footing is the typical bottom anchor and straps are the typical top anchor.

Wood deck support posts should be at least 6x6 and should be not more than 14 feet tall measured from the footing to the bottom of the beam unless the deck is designed using accepted engineering practices. Six-by-six posts supporting a 2-member beam or equivalent may be notched with the beam attached to the post using two bolts with nuts and washers. A post-cap device may also be used. Six by six posts supporting larger beams may not be notched and should use a post-cap device to attach the beam to the post (see Figure 2).  Occasionally, you may see a beam attached to the side of the post with bolts or lag screws. This beam is supported only by the hardware, and this is not acceptable. 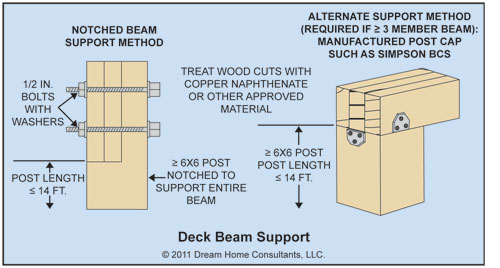 Built-up beams may no longer be constructed using smooth shank nails. Number 10 wood screws at least 3 inches long or 10d-deformed-shank nails should be used and should be staggered in two rows. In addition, two fasteners should be installed at each beam end and at any splices. Any splices should be supported by a post.

A cantilevered deck is one where the joists project beyond the support beam. This is a popular deck construction method. The standard rule for the cantilever backspan ratio in residential framing is 1 foot of cantilever projection to 3 feet of joist inside the beam. Decks may be constructed using a 1 to 4 ratio instead of a 1 to 3 ratio (see Figure 3). 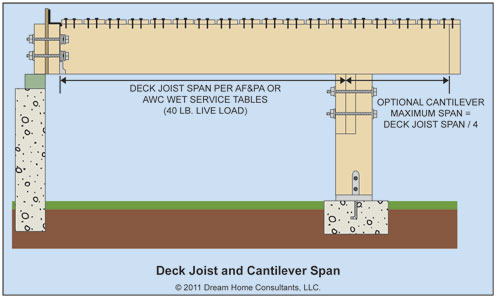 The Word remembers pouring deck footings using a few bags of concrete. These footings were rarely the size now recommended. The minimum round footing diameter is 15 inches and the minimum square footing dimension is 13 inches. Footing size increases significantly based on support post spacing and joist span.

The minimum footing depth is 6 inches. Like other footings, deck footings should be placed on undisturbed ground or ground that has been properly compacted to have a bearing capacity of at least 1,500 psi. The footing bottom of a deck attached to the home should be at least 12 inches deep or below the frost line, whichever is deeper. That's not hard in Phoenix where we don't worry about such things as frost lines. Footings for decks not attached to the home are not required to be below the frost line, but it is good practice to place them there.

Here's another twist that may occur with self-supporting decks. Any deck footing within 5 feet from the home's exterior wall should have its bottom bearing surface at the same level as the home's footing. This makes sense when you think about it. Remember that the load from a footing extends out from the footing, not just straight down. A deck footing that's too close to the house could put an unintended load on a component such as a basement wall.

A good option for avoiding the problems with flashing and with deck ledgers is to make the deck self-supporting. It's usually a more costly option because it means more footings, posts, and beams.

Self-supporting decks more than 2 feet above grade should be braced to reduce racking (lateral movement). Bracing should occur at each support post and should be installed both perpendicular and parallel to the deck joists. The brace should be at least a 2x4 and the hardware should be at least ⅜ inch bolts with washers and nuts (see Figure 4). 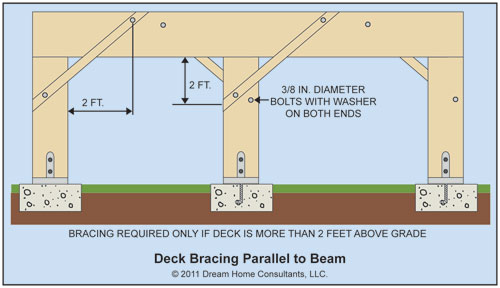 
Self-supporting decks may be attached to the house to provide only lateral bracing. In this case, the attachment does not provide the structural support of a ledger board. Refer to DCA-6 for more information about the recommendations for this situation.

In case you missed these references last time, the 2009 IRC has a prescriptive section on decks and the new 2012 IRC expands on the 2009 code coverage of decks. Two other excellent guides to deck construction are DCA 6 Prescriptive Residential Deck Construction Guide 2009 IRC Version available at awc.org/codes/dcaindex.html and the Deck Framing Connection Guide by Simpson Strong Tie available at www.strongtie.com/ftp/fliers/F-DECKCODE09.pdf.

Decks frequently are built by weekend handymen, often with little more than a "how to" book, if they even have that. Given the risk of poor construction and the risk of personal injury and property damage, decks deserve special attention during our inspections.