Once again, The Word invites you to travel into the dark realm of issues that are sometimes misunderstood by home inspectors. The Word hopes you will find this trip informative and maybe a little entertaining.

Last time, we discussed deck flashing, ledger boards and hardware. This time, we'll discuss deck stairs, guards and handrails. There are numerous ways to build decks (and many other things we inspect) that will work. We will discuss decks built using #2 Southern Pine. Decks using other materials and decks designed using other approved methods may work just fine. Just because something doesn't look quite like we discuss here doesn't necessarily mean it's wrong.

Let's briefly review what we discussed last time. One of the prime reasons for deck failure is water infiltration between the deck ledger board and the home. Water deteriorates the wood and the deteriorated wood allows the fasteners to pull loose. Proper flashing between an attached deck and the home is essential, and this flashing often is poorly installed. Look closely at this flashing.

Deck ledger boards should be attached to a nominal 2-inch-thick band joist or to an engineered rim board that is at least 1 inch thick using ½-inch bolts with nuts and washers or using ½-inch lag screws. You should not see ledger boards attached using nails or attached directly to floor trusses. You can make the deck self-supporting and eliminate both the flashing and ledger board issues.

The good thing about deck stairs, landings and guards is that the rules are the same as for interior stairs, landings and guards. Stairs should be at least 36 inches wide. Interior stair width mainly is for egress during a fire. Fire egress isn't usually an issue for deck stairs, but stairs that are too narrow are not safe to use no matter where they are. Besides, it's easier to keep interior and exterior stair rules consistent. 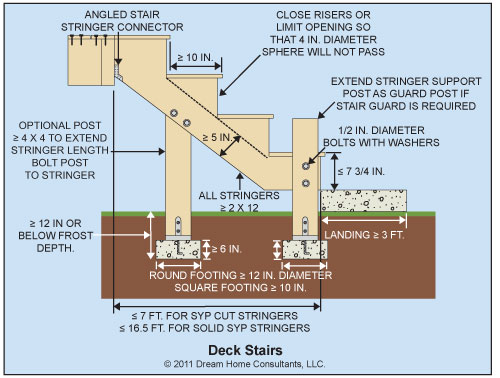 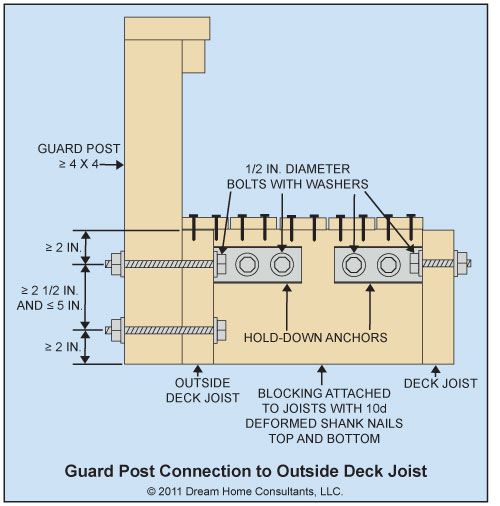 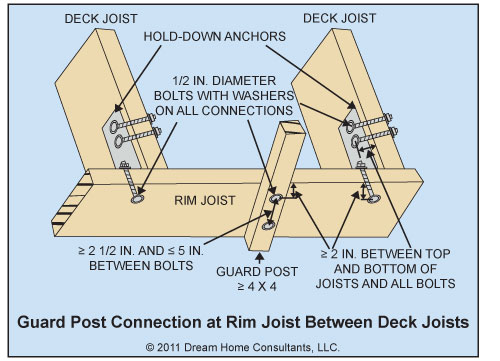 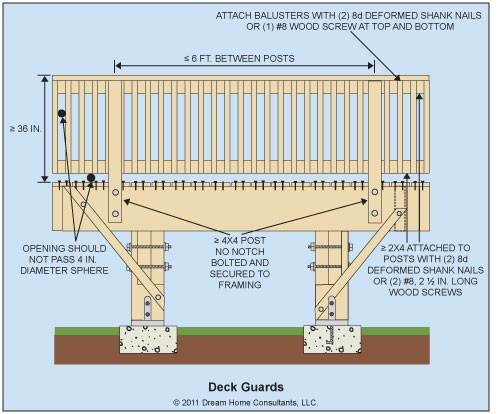 Deck landings should be at least as wide as the stairs and at least 36 inches deep in the direction of travel. Landing size also is a fire egress issue. Intermediate landings should be built as independent self-supporting decks, complete with support posts, footings and diagonal bracing.

Guards are required when the deck's finished surface is more than 30 inches above grade. Guard height should be at least 36 inches above the deck. Occasionally, you'll see a bench or other fixed horizontal surface at a guard. Measure the guard height from the fixed surface, not from the deck floor.

By the way, guards often are called guardrails, particularly when they protect the open sides of stairs. Guard and handrails are the IRC-approved terms for these different components, but if you like the term guardrail, that's no problem.

The deck stair maximum riser height is 7-¾ inches and the maximum riser height difference between landings is 3⁄8 inch. The most common places to find stair riser problems are at the top, bottom and any intermediate landings. The framers sometimes don't position the stringer in the right place at landings or don't cut the stringer to allow for thickness differences if different materials are used on the treads and on the landing.

The minimum tread depth is 10 inches and the maximum tread depth difference between landings is 3⁄8 inch. Measure the tread depth between the leading edge of adjacent treads. This is where your feet will land when you walk the stairs.

Most stairs will have a nosing that projects beyond the riser over the next tread. The nosing should project beyond the riser between ¾-inch and ¼-inch riser and this projection should not vary more than 3⁄8 inch in a stairway.

Why do riser height and tread depth differences matter? You get used to the risers and treads when you walk a flight of stairs and you expect them to be uniform. If they're not uniform, you could stumble and fall. Minor riser and tread differences aren't a big deal for most people, but for small children, the elderly and people with reduced mobility, they could be a very big deal and cause a very bad fall.

Check the condition of the stair treads when you're walking the stairs. Wide tread material (2x8 and 2x10) is recommended for solid stringers, but in The Word's experience, treads (and other horizontal wood deck materials, for that matter) wider than the nominal 6 inches have a nasty tendency to cup over time. Severely distorted treads can be a safety issue, so watch for this.

The best way to attach stringers to landings is with an angled joist hanger. Other attachment methods such as a ledger under the stringers and screws through the landing rim board into the stringer may be acceptable if approved.

A handrail is required for stairs with four or more risers. The handrail should be continuous from above the leading edge of the first tread to the trailing edge of the last tread. The top of the handrail should be between 34 and 38 inches above the leading edge of each tread. The problem with handrails for older decks, including those built by The Word in the 80s and 90s, is that 2x4 handrails were typical. Such handrails are not allowed because they are not graspable. Adding a 2x2 handrail will easily correct the problem, as will adding a circular handrail with a diameter between 1-¼ and 2 inches. Cutting in an appropriate finger recess will work for some handrail configurations.

When the stair handrail also serves as a guard, the vertical members should not allow a 4-3⁄8-inch-diameter sphere to pass. This is different from the 4-inch-diameter requirement for a guard.

Here's another problem with older decks. In the old days, we'd notch posts for deck guards and handrails and attach everything with nails. This works fine for a while, but over time, the nails tended to pull out, causing catastrophic failure of the guards and handrails. We improved this method by attaching the posts with bolts or lag screws to the deck rim joist. The problem with this method is that you're still relying on the nails that attach the rim joist for a significant amount of the holding power.

Now, deck guard and handrail posts may not be notched, and they must be secured to something substantial such as a deck floor joist or a rim board that is, in turn, secured to a floor joist. Hold-down anchor hardware has been developed to secure these connections. There should be not more than 6 feet measured horizontally between most wood posts for guards and stair guards. Other approved designs are acceptable.

Deck construction requirements and guidelines have changed significantly in the past few years. As often is the case, the question arises of how to report components that do not comply with current requirements. The answer depends on whether you, in your professional judgment, believe that non-compliance creates an unsafe condition as defined in the ASHI Standards of Practice. If you believe a component is unsafe, you should report it as such and recommend corrective action. If you don't believe a component is unsafe, you may report non-compliance as information or you may chose to ignore the situation. It's your choice, but choose wisely.

In case you missed these references last month, the 2009 IRC has a prescriptive section on decks and the new 2012 IRC expands on the 2009 code coverage of decks. Two other excellent guides to deck construction are DCA 6 Prescriptive Residential Deck Construction Guide 2009 IRC Version available at awc.org/codes/dcaindex.html and the Deck Framing Connection Guide by Simpson Strong-Tie available at www.strongtie.com/ftp/fliers/F-DECKCODE09.pdf. Remember, alternative methods and materials may be acceptable.

Decks frequently are built by weekend handymen, often with little more than a "how to" book, if they even have that. Given the risk of poor construction and the risk of personal injury and property damage, decks deserve special attention during our inspections.