Once again, The Word invites you to travel into the dark realm of subjects that are sometimes of interest to home inspectors. The Word hopes you will find this trip informative and maybe a little entertaining.

Our subject this month is deck stairs. This is an update of The Word’s rant about this subject in the July 2016 issue of the ASHI Reporter. 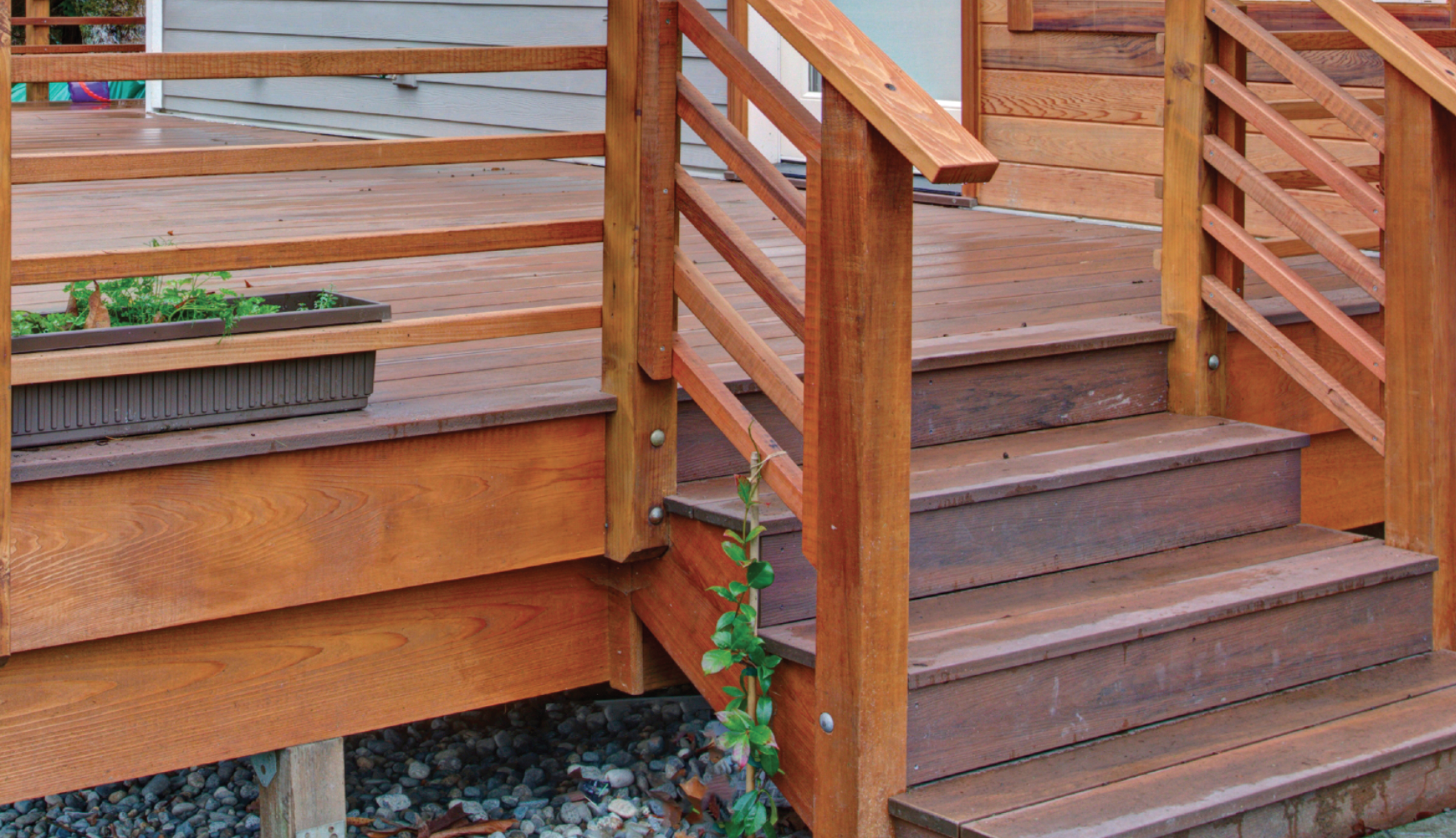 Inspectors should remember two important facts about stairs. The first fact is that stairs are one of the most dangerous systems we inspect. Falls involving stairs can result in serious personal injury; that is where the big money lies for attorneys. The second fact is that interior and exterior stairs share almost all of the same requirements. If anything, we should be more careful about applying current safety and structural requirements to exterior stairs because exterior stairs are subject to harsh environmental conditions that may exacerbate safety and structural problems. We should spend time inspecting all stairs and especially exterior stairs. 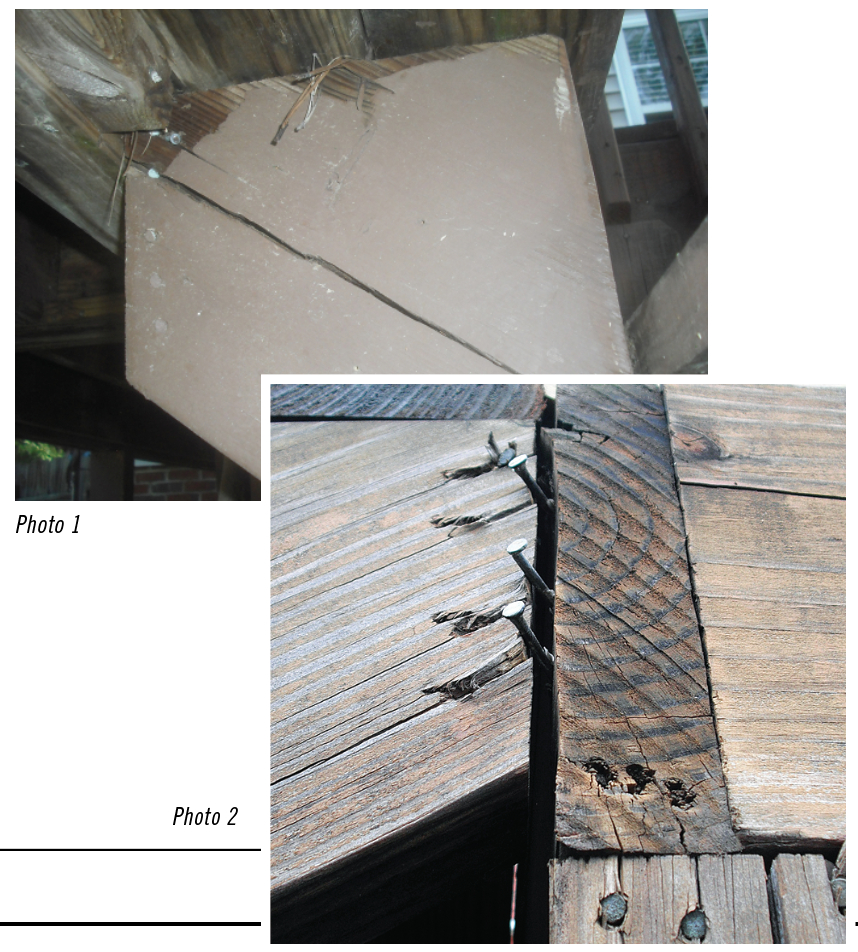 Inspection of stairs begins by determining if the stairs are safe for you and your client to use. Perform a quick visual check of the stringers, including their condition, length and attachment to the deck. If you see anything like Photos 1 or 2, do not use the stairs and recommend that nobody else use them. You do not want anyone on the stairs if they collapse. “Failed under test” is not a good explanation for stair-related injuries during an inspection.

Stringers usually have two bearing points. The stringer plumb (vertical) cuts should bear on a rim joist or on a beam. The stringer seat (horizontal) cuts should be supported at grade level by posts that bear on footings. If, however, there is good stringer bearing on a solid landing, The Word declares victory and moves on. Those who live in cold climates might consider being stricter about stringer footings because frost heave could move the stringers and loosen the connection at the plumb cut. Refer to Figure 1 for a summary of stringer installation recommendations. 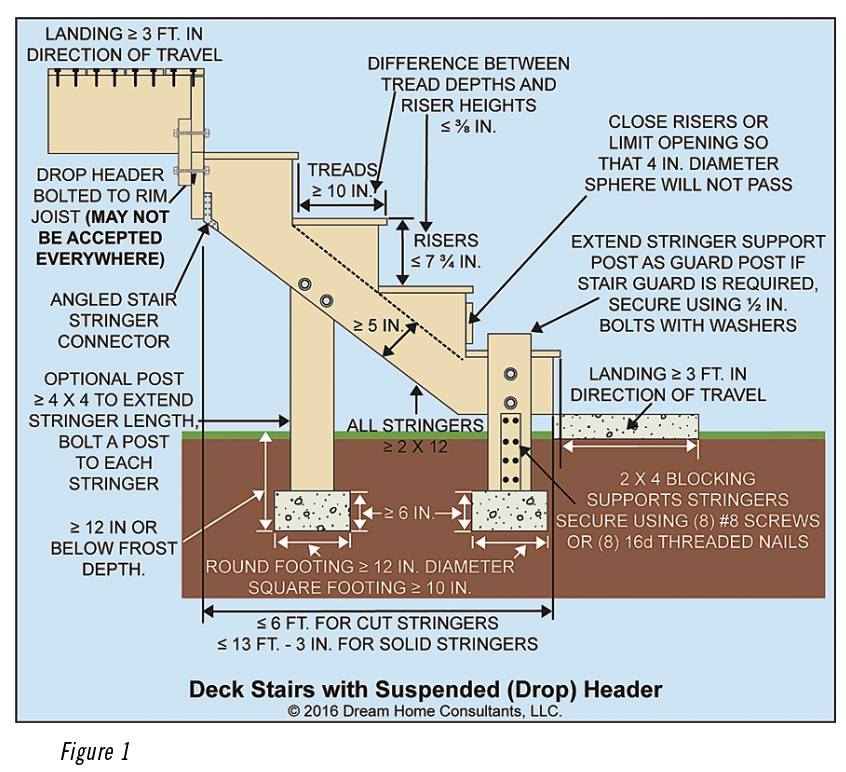 The right way to attach the stringer plumb cut to the rim joist or beam is by using a connector, such as a Simpson LSC, installed according to manufacturer’s instructions, including using the recommended fasteners. Connectors provide both the vertical and lateral support for the stringer. Photo 3 shows an attempt to attach a stringer using a connector. Good try, but there are still problems. The stringer should fully bear on the connector seat. Screws are not allowed unless specifically allowed by manufacturer’s instructions, and then only manufacturer-supplied screws may be used. Deck screws and drywall screws are not allowed. 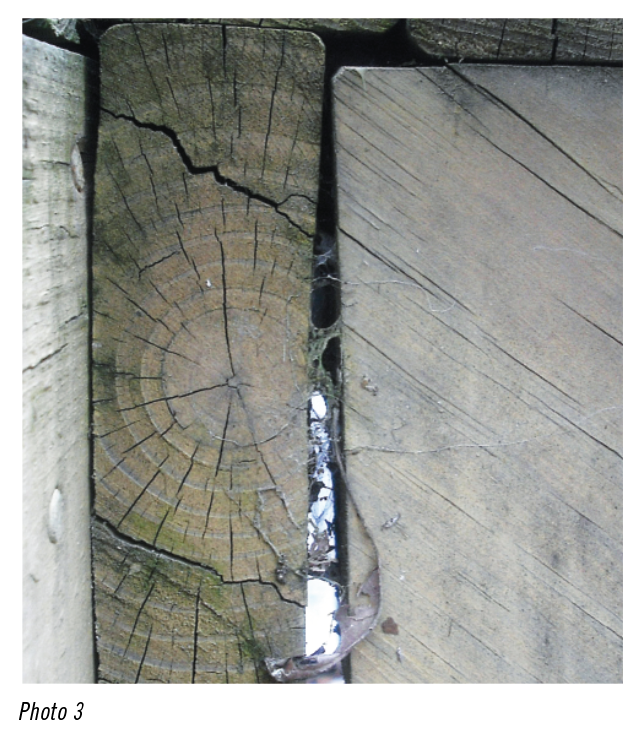 The wrong way that might work is when stringers are attached using nails that are not subject to withdrawal. This method usually involves installing the nails at an angle through the stringer into the rim joist, a method called toe-nailing in some areas. This method sometimes involves installing the nails through the rim joist into the stringer plumb cut, a method called end-nailing in some areas. Stringer attachment using nails that are not subject to withdrawal might work if an adequate quantity of the correct nails is installed, if the nails are properly installed (there are rules about how to correctly install toe-nails), and if the wood and the nails maintain their integrity over the life of the deck. That is a lot of ifs, more than The Word is comfortable with. The Word recommends installing stringer connectors on all stringers that are nailed to the rim joist, beam or to a drop header.

As we have discussed, the right way to attach a stringer is to use a connector. A properly installed connector makes stringer installation easy and can reduce complications such as a drop header. Perhaps carpenters have not received the memo about these connectors or perhaps they like to do things the hard way. In either case, there are two common methods of positioning the stringer relative to deck flooring.

The best place to position a stringer, from a stringer attachment perspective, is to place the top tread even with the deck flooring. This allows the stringer plumb cut to fully bear on the rim joist or beam and provides maximum fastening area. Carpenters do not like this method because they claim it makes installing the stair guards and handrails more difficult. A common stringer placement, therefore, is to attach the stringer on the rim joist one riser below the deck flooring. 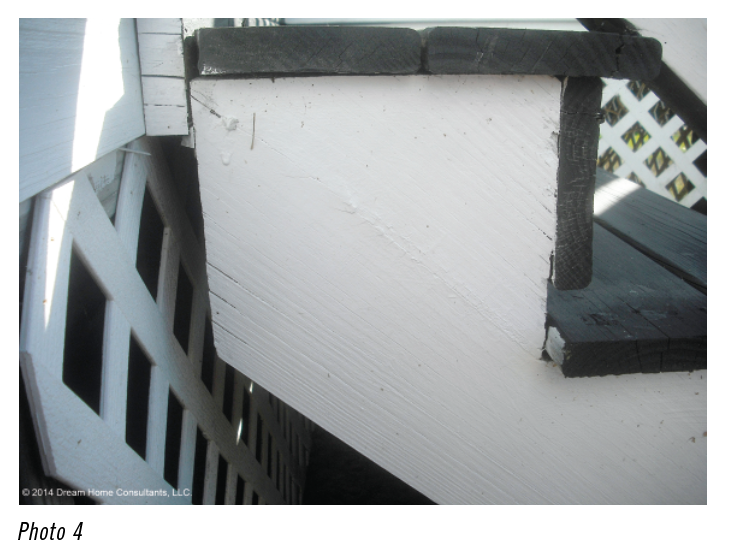 There are two common ways to accomplish this. Photo 4 shows one method, which is so wrong that it is clearly a job for Obviousman. The other method is to use a drop header. 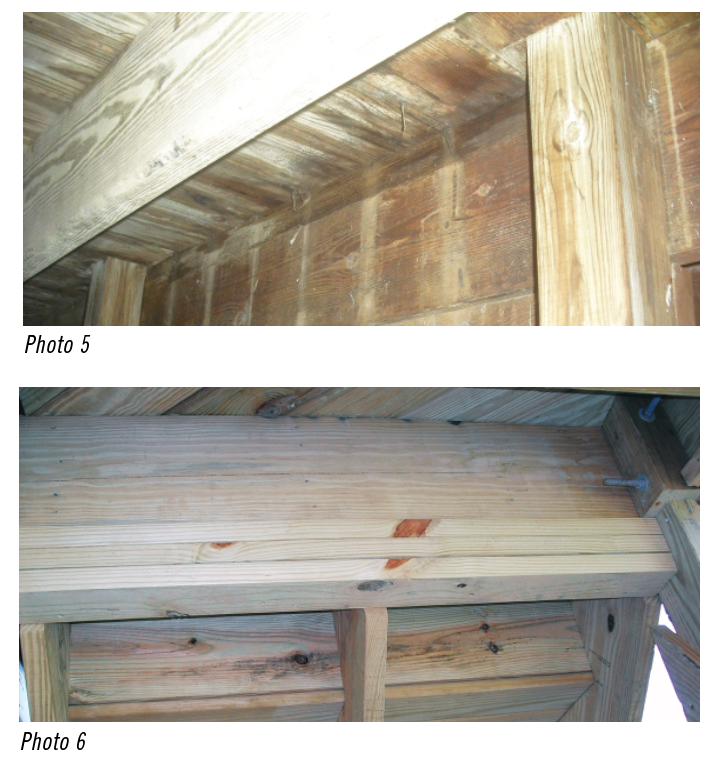 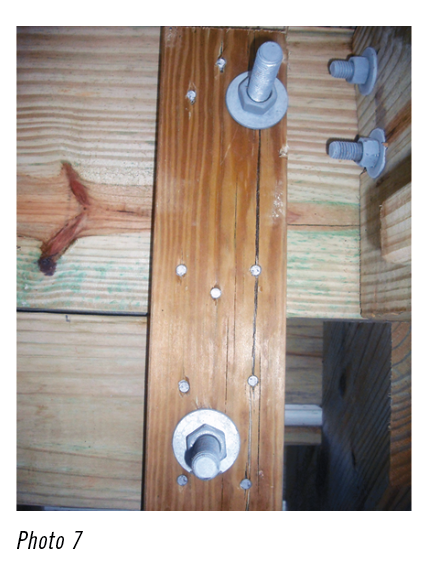 Assuming that the stringer seat cuts are not supported by posts and footings, the next best stringer support is to have the seat cut bearing on a landing. The stringer is better able to support the imposed loads with more wood on a bearing surface. At a minimum, 1½ inches of the seat cut heel should bear on the landing. The seat cut toe should not be the only part of the stringer bearing on the landing or other support. We should report configurations such as shown in Photo 8 as significant deficiencies requiring correction. These configurations can allow the stringer to shear along the wood grain, resulting in stair collapse. 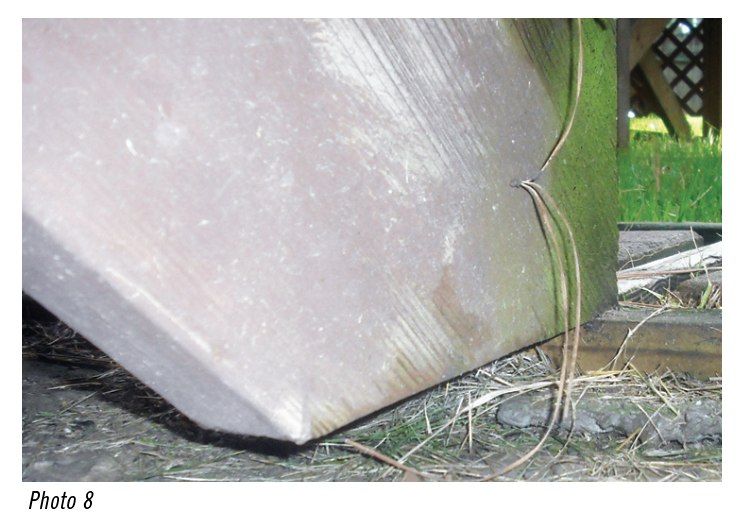 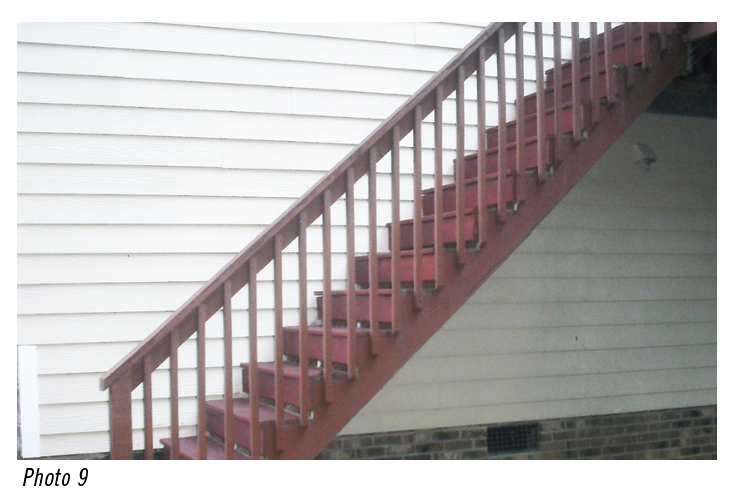 A stringer should be made using at least a 2x12 and the spans in the previous paragraph assume this. A stringer made using a 2x10 may work, but it is difficult to obtain the recommended stringer throat depth when cutting a 2x10. The throat is the area of uncut wood at the smallest point. The throat should be at least five inches deep. If a saw kerf extends past the riser/tread triangle, the measurement is to the saw kerf. Photo 10 shows a stringer throat that is way too small. Refer to Figure 1. 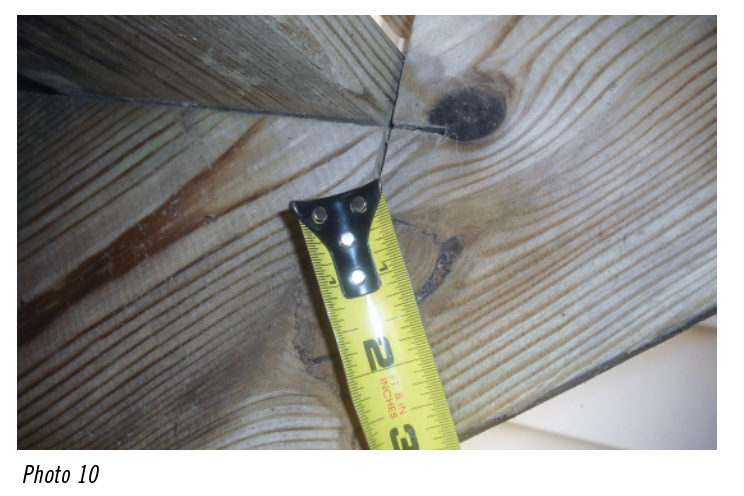 A handrail is required on one side of all stairways with four or more risers, including the top and bottom risers. Almost all exterior stairway handrails that are made using wood are wrong and dangerous. The typical 2x4, or larger, exterior handrail is not graspable, making it difficult for those with small hands, and those with impaired mobility, to use. Figure 2 shows the only approved handrail shapes for any stairway, interior or exterior. 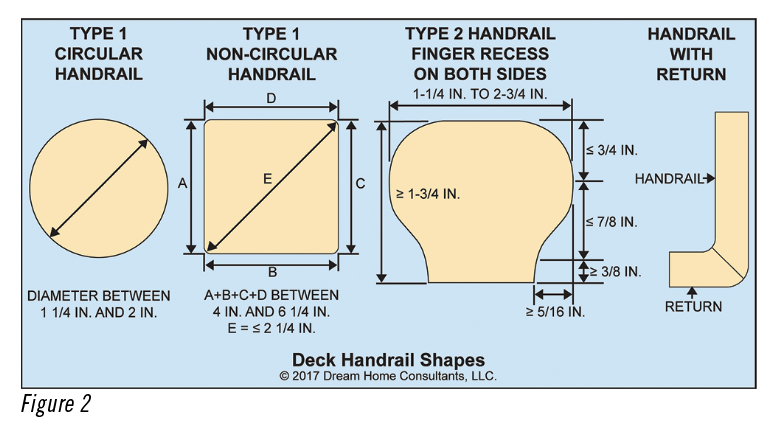 All handrails should conform to one of these shapes, and should begin and end with a post or with a return. The handrail should be continuous from above the top stairway riser to above the bottom stairway riser. The good news is that this is an easy defect to fix. Just install a 2x2 handrail on the stair guard.

A guard is required on the open sides of all stairways with a vertical rise of more than 30 inches. At the maximum riser height of 7¾ inches, this means that stairways with four or more risers will need a guard and a handrail. 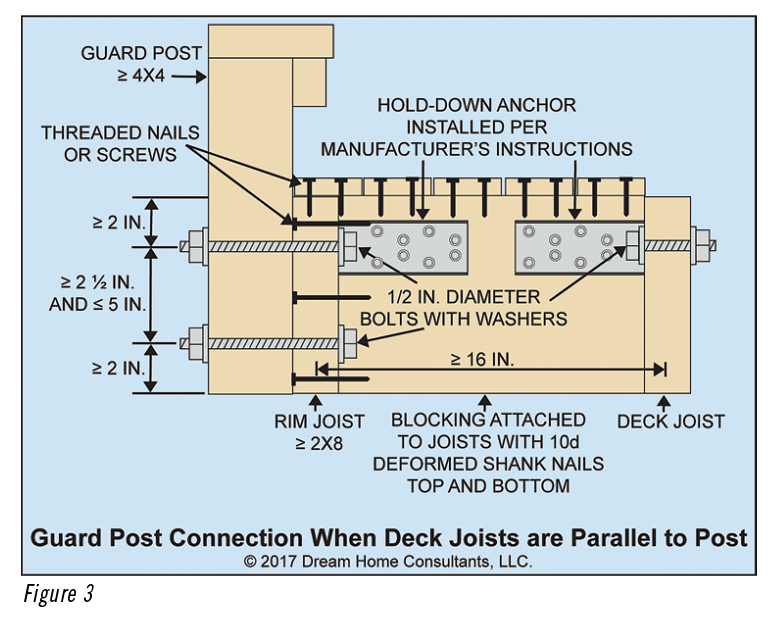 Guard posts (at least solid 4x4s) should be installed at least every six feet. The trick is to secure these posts so that they comply with the 200 pound-per-square-foot load requirement. Just securing the posts to the deck rim joist, or to the stringer, using bolts is not enough. Using screws or nails to secure the posts isn’t even close to being enough. Figure 3 shows one way of securing guard posts to the rim joist or to the stringers. You won’t see this often in the field, but you should. Almost every other method of securing guard posts fails to comply with the 200-pound load requirement, regardless of how secure the guard feels when you push on it.

The lesson for this column is the same as for previous columns about decks: Do not be the inspector who fails to report deck defects. The deck demons may haunt you if you do not find them and report them.

Memo to Hestia (goddess of the home and hearth): The Word does not reside on Mt. Olympus (just at its base) and welcomes other viewpoints.