By Bruce Barker | November 01, 2011
Once again, The Word invites you to travel into the dark realm of issues that sometimes are misunderstood by home inspectors. The Word hopes you will find this trip informative and maybe a little entertaining. 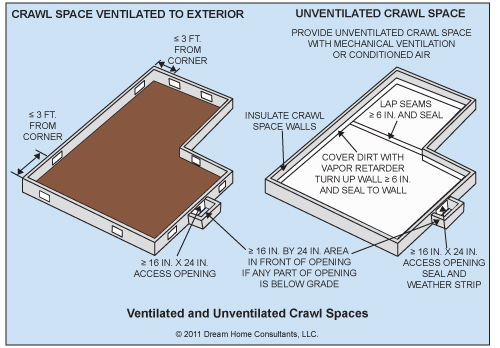 So what's wrong with the current rules?

It's said that they don't build homes like they used to. That's true. Homes used to be built using natural materials. Insulation, if any, was an afterthought. Air-sealing cracks and openings is only now beginning to appear in the consciousness of builders and the public. Older homes breathed, to put it kindly. In more derogatory terms, older homes leak energy like a sieve. This energy-exchange system between the home and its surroundings is the environment in which the current crawl space ventilation rules were developed. The rules usually work fine if the system isn't changed.

Here's a common-sense fact about systems: When you change a system, you probably will change how that system works. You change the home's energy and water vapor exchange system when you install vapor-impermeable floor covering materials such as vinyl and tile and when you add insulation between the crawl space joists. The energy and water vapor exchange is now different from what usually worked under the old crawl space ventilation rules. The changed system will work differently and probably worse.

Let's find out why.

To make things even more interesting, let's throw a vapor retarder like a vinyl floor covering or tile into the system. Energy flows from hot to cold. Water vapor flows from higher to lower vapor pressure. Energy and water vapor will flow from the warmer/wetter crawl space into the cooler/dryer home in the summer and will reverse flow in the winter. A wood floor attached directly to the joists allows some energy and water vapor transfer, mitigating some of the condensation potential. The vinyl or tile floor covering is a vapor retarder on the wrong side of the system (in the summer), which effectively stops this transfer and allows water to condense on the underside of the vinyl. That's what sometimes allows mold growth that causes floor-covering discoloration.

As we now know, changing the crawl space system, even with good energy-efficiency intentions, can have bad consequences. But the energy inefficiency of an uninsulated crawl space is not acceptable, either. So, what to do? Fortunately, there is an answer: the conditioned crawl space.

Conditioned crawl spaces to the rescue

Here are the basic requirements.

A dirt-covered crawl space floor will almost always emit some water vapor into the crawl space, so it must be sealed as well as possible. A Class I vapor retarder such as 6-mil polyethylene should cover the entire floor. Seams should be lapped at least 6 inches and sealed with a compatible sealant. The vapor retarder should turn up the crawl space wall, with the end secured and sealed to the wall. Don't forget the Radon mitigation if you're in a Radon-prone area.

Then, instead of insulating between the floor joists, the exterior crawl space walls should be insulated. R10 rigid foam on the concrete or masonry walls and R13 insulation in any crawl space wall framing will satisfy current energy-efficiency requirements and is more than required in warm climates.

The ASHI Standard of Practice requires us to inspect insulation, vapor retarders and ventilation in unfinished areas. The crawl space certainly qualifies as an unfinished area. It also requires us to report systems that are not functioning properly or are significantly deficient. As we've discovered, a crawl space with insulation between the floor joists may not be functioning properly. Damp wood, wood rot, mold and wet insulation are signs of an improperly functioning crawl space. Now you know a little about why this might be happening and what might be done to cure the problem.

Memo to the crawl space gods (or monsters that may reside therein): The Word does not reside on Mt. Olympus (just at its base) and welcomes other viewpoints. Send your lightning bolts or emails to inspectorbruce@cox.net. The thoughts contained herein are those of The Word. They are not ASHI standards or policies.

The Word thanks Joseph W. Lstiburek and Building Science for some of the information in this article, for his excellent work and for his willingness to share his insights with the rest of us.