Once again, The Word invites you to travel into the dark realm of terms that often are misused or misunderstood in home inspection reports. The Word hopes you will find this trip informative and maybe a little entertaining.

The Word's term today is body parts. The Word finds this term interesting because, not surprisingly, many construction terms share their names with our body parts. One lost body part that some believe The Word should find before writing these columns is his mind; however, that's a topic for another day.

A challenge to censors

Let's begin by touching on the term breast. A breast is a projecting part of a wall. A common use of the term describes a fireplace wall that projects into a room to form the front of the chimney. Another meaning of breast is the underside of a handrail, beam, rafter or similar component. In load-bearing components, this is the tension side. Still another meaning is that part of a wall between the floor and a window. The projecting part of a wall makes sense, but the other meanings ... well, we're not doing word origins now.

While we're in the area, what about the term nipple? A nipple is a short length of pipe that is threaded on both ends. One common use of a nipple is to join two pieces of pipe. Another common use is in gas pipe sediment traps and drip tees.

Sediment traps are required at gas appliances, such as water heaters and furnaces, to help keep debris out of the appliance. Drip tees are required only if the gas is known to contain moisture, which is rare in modern utility-supplied natural gas. Sediment traps and drip tees have similar configurations, so plumbers often are confused about the difference, therefore, often install them improperly. 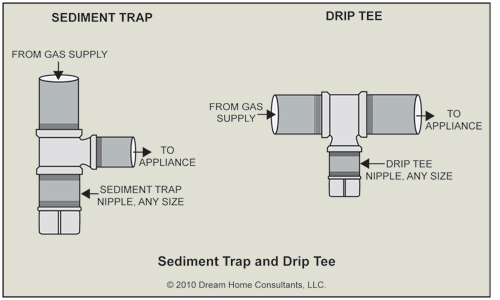 If you've ever tried to fasten a stud to a sill plate, then the term toe nail might make sense. Perhaps the term comes from hammers striking toes while fastening studs to sill plates, or perhaps it comes from using your toes to keep the stud from moving while toe nailing. Either way, to toe nail is to drive a nail at an oblique angle. Toe nailing is common when wood meets at right angles such as floor and ceiling joists at plates. Toe nailing is also common when you want to hide the nail, such as when installing hardwood floors. 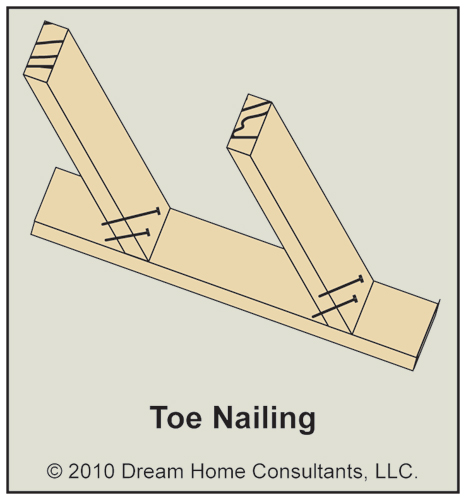 On the other end of the foot from the toe is the heel. One meaning of heel refers to the bottom end of an upright piece of wood where it rests on a support. Another meaning combines heel with cut to make the term heel cut, also known as the seat cut. The heal cut is a horizontal cut at the lower end of a rafter where it bears on the plate. On the other end of the rafter is the plumb cut, which is the vertical cut where the rafter bears on the ridge.

Moving up the body we come to the butt. The most common use of this term is to describe the thick end of a shingle, such as wood shingles and shakes.

Getting our head in the game

Our heads and the surrounding area provide numerous construction terms, starting with head. One meaning of head is the top end of an upright piece of wood opposite from the heel. Another meaning is the horizontal cross member between door and window jambs, which usually provides support for construction above. In this meaning, the common term is the header. In plumbing and HVAC, head (static head or pressure head) is the pressure of fluid expressed as the height of a column of fluid, e.g., inches of water column. Head describes the pressure of water in plumbing pipes.

A prominent feature on most heads is the nose. A nose, often called nosing, is a projection that extends beyond a horizontal surface below. The most common use of nosing is the part of a stair tread that extends past the riser. Stair-tread nosing should be at least ¾-inch and not more than 1-¼ inches deep and should not vary in depth more than 3⁄8-inch on any tread between two stories. Nosing is required on all stair treads less than 11 inches deep.

Moving down from the head, we come to the neck. For those who need to describe classical columns, one meaning of neck is the space between the bottom of the capital (top part) of a column and the column's shaft. The transition between the neck and the shaft usually is marked by a ring of molding. Another, perhaps more useful, meaning of neck is a section of branch HVAC supply duct that connects the register boot to the main supply duct.

In the neck, we find the throat. The most common use of throat describes the narrow transition point between a fireplace hearth (firebox) and the chimney. A throat must be at least 4 inches deep and have an area at least as large as the flue area. The damper is usually, but not always, at the throat. 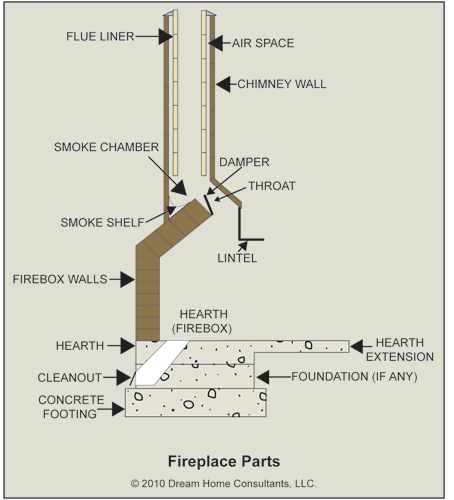 Not in my area

Now, some of you are no doubt scratching your head or perhaps some other body part, and wondering why you've never heard these terms used in this way. The Word wondered the same thing. Many words are used in different ways depending on what part of the country you live in. Learning how others use words is fun, in The Word's humble opinion. Here's an example.

When The Word was wandering in the darkness building homes, before finding the light of inspecting, many of his subcontractors were from rural Georgia. They used the word trade. Now, in Indiana, where The Word grew up, to trade means to barter, as in I'll trade you my egg salad sandwich for your peanut butter sandwich. It took The Word quite some time to figure out that his subs were using trade to mean doing business with someone. Both are valid ways to use the word trade; it's the regional difference in usage that caused confusion.

Sometimes, it's fun to take an offbeat look at terms we may not use regularly or that we may not use as defined herein. The Word hopes you enjoyed this little trip into obscure terms and definitions.

Memo to the lexical gods: The Word does not reside on Mt. Olympus (just at its base) and welcomes other viewpoints. Send your lightning bolts or e-mails to inspectorbruce@cox.net. The thoughts contained herein are those of The Word. They are not ASHI standards or policies.

The Word thanks Jim Katen for this column's inspiration, but nobody should blame him for the content. Term definitions are from Dictionary of Architecture and Construction, Fourth Edition, by Cyril M. Harris.