The Rest of the Story

Once again The Word invites you to travel into the dark realm of subjects that are sometimes misunderstood by home inspectors. The Word hopes you will find this trip informative and maybe a little entertaining.

This month, and for the next month or two, we will discuss (as Paul Harvey used to say) the rest of the story. We usually just do our thing, collect our fee and move on to the next inspection. Rarely do we see what happens after we leave. The rest of the story can be interesting and instructive in terms of what we might want to look for and report during our inspections.

The Home
The Word and his wonderful wife moved from Phoenix to Cary, North Carolina, in 2012. We wrote an offer on a ranch-style home built on a crawlspace in 1980. The home had been somewhat neglected for many years due to the age and declining health of the seller. Some cosmetic work had been done to get the home ready for sale, but it was clear to anyone with even a little knowledge that this home needed substantially more work.

The Inspection
We had the home inspected by a local inspector. This is a good idea not only to remove any perceived conflict of interest but also to get another perspective from someone who knows about the quirks of homes in the area. The Word didn’t know any inspectors in the Cary area, so we did what any smart consumer should do. We used the Find an Inspector tool on the ASHI website. Bruce Ramsey, ACI, was the inspector who got the dubious distinction of doing an inspection with The Word tagging along. The experience was so traumatic for Bruce that soon after the inspection he skipped town and moved to Atlanta. (Seriously, Bruce did a great job and we both had a good time.) See Figure 1.

Bruce identified almost all the major deficiencies. We both missed a couple deficiencies that we probably should have found. Maybe we were having too good a time. What we missed is more instructive for all of us than what we found. We’ll discuss both as we go along.

Deficiency: Grading
The sellers had managed to introduce moisture into the crawlspace in just about every possible way. A sump pump and perimeter drain had been installed in the crawlspace recently, but that only addressed the symptom. It’s smarter to fix the causes of a problem.

Any time your inspection is limited, you should report that fact and you should report the reason why. In this case the reason was low clearance. You should also warn your client that concealed deficiencies may exist (as was the case here) and that they should perform additional investigations if they wish more information about the condition of components that you could not inspect.

Deficiency: Gutters
Part of the grading problem under the deck and water problems in the crawlspace may have been caused by the gutters above the deck. These gutters had solid guards on top that did a good job of keeping out debris. They also did a good job of keeping out water from anything except light rain. Water went over the gutter and down near the foundation. You might want to mention the potential downside of solid gutter guards to your clients. These gutter guards were some of the first occupants of the many dumpsters used during our remodel. Yes, The Word now has to clean gutters more often, but it’s worth it to keep moisture out of the crawlspace.

The gutters were counter-sloped in a few places, they were filled with debris (where there were no gutter guards), and there were no downspout extensions to divert whatever water made it to the downspouts away from the foundation. These deficiencies also added water near the foundation. Be sure to check the gutters where possible. For us, the gutter fix was easy. The fix may not be so easy for some clients. A working gutter and downspout system is essential for keeping foundations dry, especially crawlspaces and basements. 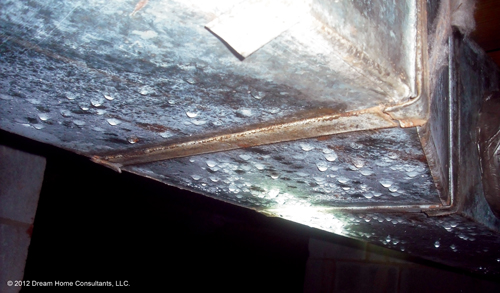 Deficiency: Sweating HVAC Ducts
Have you ever seen rain in a crawlspace? That’s what happens when you put leaky and poorly insulated ducts in a very humid environment then run the air conditioner. The duct temperature falls below the dew point and liquid water condenses out. It was literally raining under the supply ducts. See Figure 2. This added substantial liquid moisture to an already wet crawlspace. Be sure to report rain in a crawlspace if you see it. 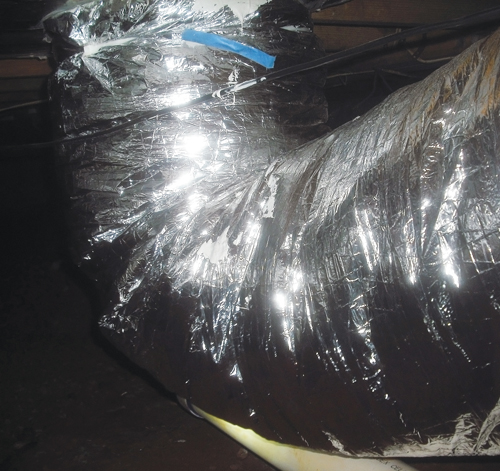 Deficiency: Leaky Ducts
Aside from being gross (a big problem for The Word’s wife who has severe dust allergies) the ducts were very leaky. Duct leakage 20% or more is common for duct systems installed before the last couple of years. Leaks are most common at duct attachment collars in plenums and distribution boxes, around supply and return boots, and at joints between duct sections. Many of these leak points are detectable during a typical inspection.

Had The Word used the existing ducts, his shiny new (not inexpensive) 19 SEER heat pump might have been more like a (significantly less expensive) 16 SEER unit. Leaks on the return side would have sucked stuff from the crawlspace into the system distributing it around our home; not a good situation for someone with allergies.

Leaky ducts aren’t just the way it was done back in the day. They are a reportable deficiency that costs clients money every day and exacerbates allergies and other health problems. The good news is that with a tub of mastic, some foil tape, some straps, and a few man-hours, leaky ducts that are otherwise in acceptable condition can be fixed at a very reasonable cost. 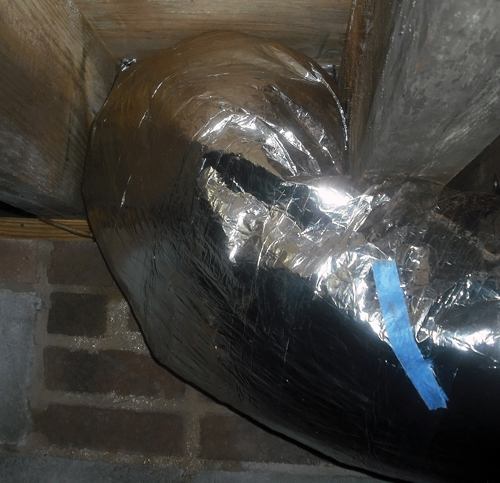 Crimped Ducts
While we’re on the subject of poorly installed ducts, remember to look for crimped ducts, especially flex duct. A crimped duct reduces the duct area and disrupts air flow by causing air currents and eddies at the crimp. A crimped duct may not provide the air flow that the duct system designer specifies. Reduced air flow may cause comfort problems and may cause the HVAC system to run longer to move enough air to heat and cool the home.

Crimped ducts can cause a significant reduction in the HVAC system’s efficiency. What’s the point of paying for super-efficient equipment only to have the efficiency reduced by sloppy duct installation?

Crimped ducts are very common. See Figures 3 and 4. These were the new ducts, much to The Word’s displeasure. Illustration 1 shows the general rule for when flex duct is bent more than it should be. You should look for and report crimped ducts. They’re usually easy to fix and doing so can make a big difference in HVAC system efficiency and effectiveness. For more on flex duct installation, go to the November 2005 issue of The Reporter.

Deficiency: Unfiltered HVAC Return
Both of us missed this one. An HVAC return had been installed in one of the faux beams in the family room. Flex duct ran from this faux beam to a sheet metal plenum that had been extended from the central hallway return into the attic. The plenum ran from the attic directly to the air handler in the crawlspace, bypassing the filter boot in the hallway. After years of pulling unfiltered air through this return, conditions were pretty gross in the return plenum when the contractor disassembled it. Amazingly, the evaporator coil was fairly clean; go figure.

It’s a good idea to do some additional investigation when you see something that’s unusual, like an HVAC return where one isn’t normally installed. There may be a reportable deficiency.

Deficiency: Blocked Condensate Drain
Somebody blocked the condensate drain with earth when establishing grade at the foundation. The Word doesn’t know how long all that water from humid North Carolina summers had been backing up into the air handler and then into the crawlspace. Suffice it to say that the air handler was shot, which combined with a 20-year-old condenser made the decision to replace the HVAC system a no-brainer.

The Bottom Line
This brings us full circle to the wet crawlspace. Moisture from multiple sources had accumulated in the crawlspace for years. The house had that musty crawlspace smell, and the humidity in the house was way too high. There was surface fungal growth everywhere in the crawlspace. The insulation between the floor joists was deteriorated and only marginally effective. Something needed to be done, and it wasn’t going to be inexpensive. We’ll start there next month.

Memo to Poseidon (who would have been at home in our crawlspace): The Word does not reside on Mt. Olympus (just at its base) and welcomes other viewpoints. Send your lightning bolts or emails to: Bruce@DreamHomeConsultants.com.
The thoughts contained herein are those of The Word. They are not ASHI standards or policies. 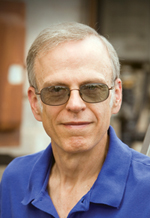 Bruce Barker operates Dream Home Consultants. He has been building and inspecting homes since 1987. He is the author of “Everybody’s Building Code” and currently serves as chair of the ASHI Standards Committee. To read more of Barker’s articles, go to www.dreamhomeconsultants.com.