The Holidays are Over, but Giving and Receiving can Continue all Year ’Round

By Frank Lesh | February 01, 2016
Now that the holiday season is over, it’s time to start thinking about increasing your business to help pay for all those gifts you bought.

You can do what most inspectors do, such as passing out more brochures, advertising in the local media or increasing your search engine optimization (SEO) by going to Facebook, LinkedIn or any number of other Internet options. Those are all good ideas. However, I found that one of the best ways for me to increase my business was to be the “go-to guy” in my area. Whether you focus on the physical area in which your business is operating or you develop a specific area of expertise, your efforts can have lucrative rewards.

Let me explain the physical location first. If you are giving a presentation at a real estate office, and you suspect many of the agents don’t use you because they think you’re “a deal killer,” you can turn that belief into a great opportunity by making them an offer they can’t refuse. I once did a presentation at a realty office where some agents had seen or heard of deals falling through after I had inspected the house. The belief was that I, not the condition of the house, had been the reason the contract failed. Therefore, they decided to never use me. In addition to that, my prices were higher than most of the competition. Knowing that one of those two reasons was probably why I wasn’t being used, I started off my presentation by saying, “I don’t recommend you use me for any of your clients… (pause for dramatic effect). One, I’m not as cheap as other inspectors (and I used the word “cheap” intentionally) and two, don’t use me unless the clients are your friends, your daughter, your son or other family members.”

Every head in the office looked up and stared at me. I knew I had their attention. I went on to say, “I’m going to do a thorough inspection. I’m going to call them like I see them and some of the deals are not going to go through. So, if you’re just looking for an inspection that won’t make waves, then it’s probably best to use some other inspector. But if you want your family and friends to have a good inspection, I’m your guy.” The immediate result? I received calls from agents wanting me to do their family members’ inspections. Incidentally, many would then have the nerve to ask if they could get a discount. Of course, the answer was no. But once the inspection was completed, most of them started using me regularly. Sometimes just for family members, sometimes when they had “difficult” clients—the ones who ask a million questions over and over again and are never satisfied. Also, they would call, asking me to explain something that came up in an inspection that I did not do. I would take the time to answer their questions the best I could, even though they didn’t use me for that inspection. But the bottom line was, I became their go-to guy.

I also became a resource for other inspectors. Having decided to specialize in Exterior Insulation and Finish Systems (EIFS) installations, I did many presentations to my chapter members on what to watch out for at EIFS houses. Since the Great Lakes Chapter covers seven states, I would get calls from inspectors who had clients in the great states of Iowa, Ohio, Wisconsin, Indiana and everywhere in between.

Many inspectors accept going to real estate offices to drum up business, but many miss the opportunity to gain business from other inspectors. That’s why belonging to an ASHI chapter is so important. Inspectors get to know and trust you. There is a misguided belief that other inspectors can only be competitors and that simply is not true. If you give others your time and expertise, you will receive gratitude and business from those you help. In that respect, the holiday season may continue for you all year long.

On another note, please read Council of Representative Jim Funkhouser’s article this month. We have a program in place to help both chapters and members increase their viability. You’ll be hearing a lot more about this in the coming days. 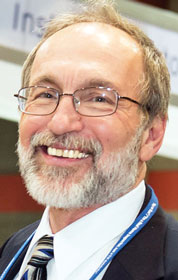