The Board of Directors or How Things Work in ASHI

I would harbor a guess that a majority of our members do not know exactly what ASHI's Board of Directors does or how it functions.

I would like to share with you my perspective formed from serving on the Board from 1989 until 1997 and returning for my current three-year term, 2011 until 2014.

Before serving on the Board and in the years between my terms, I chaired the Bylaws, Membership, and Standards Committees for a total of 12 years. Sometimes experience helps us understand how things work in ASHI.

As directed by the bylaws, the Board of Directors is comprised of six officers, specifically president, president-elect, vice president, secretary, treasurer, and immediate past president, and 15 directors, who are elected from the Council of Representatives (CoR). The Council Speaker sits at the Board table as a non-voting member. Each year the CoR elects five new directors and five retire. These directors all serve a three-year term. As per the Bylaws, officers serve one-year terms with the exception of the treasurer, who may serve three one-year consecutive terms.

Our president chairs the Board. He or she sets the agenda for each meeting and as the chair, conducts the meetings according to Robert's Rules of Order. As the chair, he or she only can vote to break a tie. Our legal counsel acts as the parliamentarian advising the Board in proper procedures and decorum. 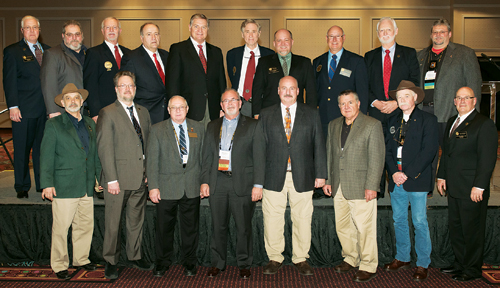 The Board meets face-to-face four times a year and also conducts business via teleconferences. Periodically, depending upon the volume of business to discuss, a two-day meeting is scheduled. There is an agenda for every meeting, which is shared in advance. For every face-to-face meeting, the president and staff assemble and distribute the Board Book, with all the motions to be presented and discussed. It is distributed electronically about 10 days prior to the meeting to the officers, directors, the CoR speaker and leaders, committee chairs and past presidents.

So, what is in a typical Board Book?

There is a notice of where the meeting will be held, usually giving the time, date, and address of the facility.

This is followed by the ASHI Mission Statement, which reads: To set and promote standards for property inspections and to provide the educational programs needed to achieve excellence in the profession.

Next comes the agenda and a variety of actions requested and submitted by the various committees, as well as progress reports from the committees and updates from the executive director and staff. The prior meeting minutes must be reviewed and accepted to facilitate accurate record keeping. Usually after the minutes, there is a list of consent items, items that need no discussion. If a Board member requests discussion of any consent item, it is placed in the proper category within the agenda.

The Board minutes accurately reflect the motions presented and whether they were approved or failed. They do not record who said what and never use a person's name. The minutes are a draft until they are officially approved at the next meeting. They are kept in the secretary's records at headquarters and retained for legal purposes.

The treasurer presents ASHI's financial status for a thorough review at every meeting. The Board enacts and approves each year's budget through the Finance Committee. The Council Speaker is a guest at the Board meeting and always provides a report, but he or she has no vote.

ASHI has a Policy and Procedures (P&P)Manual which, with the Bylaws, is the official guide, for the actions of the Board. It is available online to all members. The elected leaders are expected to have read the document and to comprehend the content. Each new motion that the board accepts and approves is then reviewed and incorporated into the P&P Manual in the appropriate place.

The P&P did not exist until 1996. Prior to that time, it was the collective memory of the directors that acted as to procedures and the established policy. Tom Kreitler, the host of The Money Pit broadcast, volunteered to review all of the prior board minutes to create the P&P Manual, which is a 'living document,' in that each approved motion augments the document and is affected by every action the Board takes.

The Board is expected to set the direction the society takes, to follow the mandate of the Mission Statement, and to follow the ASHI Principals. It is not to perform committee functions. During discussions, directors should state whether they are in favor of or against the motion before them. Concocting motions on the fly is a poor practice and is frowned upon, even though periodically it does occur. Every motion requires a second. If no second is forthcoming, there is no discussion and it is not recorded in the minutes.

There are times when the Board must discuss items privately and goes into executive session. Unfortunately this means that those not on the Board must exit the meeting room. These sessions are to allow the elected leaders to discuss sensitive issues. It makes every effort to keep these sessions as brief as possible or to schedule them during a meal.

Today, dress for officers and directors is business attire. Years ago, it was totally casual, except for the president, who was expected to wear a coat and tie. I believe this change in policy has been for the better.

I hope knowing more about our governing body encourages members to consider becoming a leader on the national level. If you have questions, please contact any of the leaders listed on page 4 of the ASHI Reporter and in the online membership directory. We are here to serve.

JD Grewell, ASHI Member 193, operates JD Grewell and Associates, Inc. in Silver Spring, Maryland. After joining ASHI in 1979, he became active in the MAC-ASHI Chapter and has served on numerous national committees including Officer Nominating, Bylaws and Ethics. In addition, he has chaired the Standards and Membership Committees. In 2003, Grewell received the John E. Cox Award for contributions to his chapter. He was recognized for his service to the society in 1998 as the recipient of the Phillip C. Monahon Award, and again in 2001, when he received the Iron Man. Visit JD's Web site at www.jdgai.com.