Subflooring usually spans 12 to 24 inches, with 16 inches being most common. 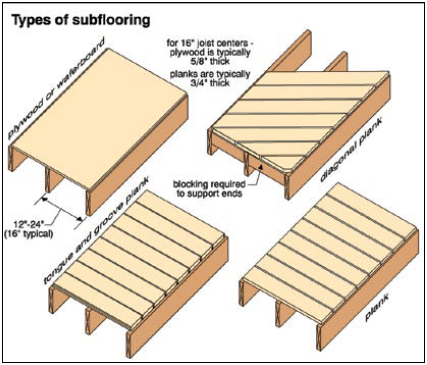 Subflooring is a nominal 1-inch thick plank (about 3⁄4-inch of actual thickness) or about 5⁄8-inch plywood or waferboard, assuming 16-inch centers on the joists. 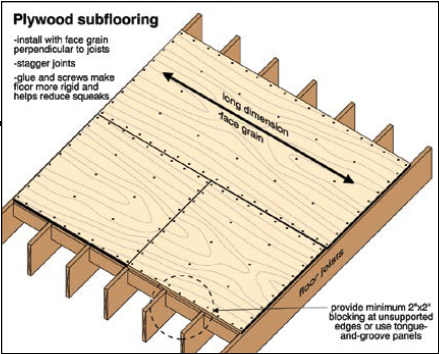 Plywood: Plywood subflooring should be installed with its long dimension and face grain perpendicular to the joists. Installing plywood with the subfloor parallel to the joists makes the flooring weaker.

Making Little Trusses: Using glue and screws to fasten the subfloor to the joists makes the whole floor act as a rigid truss.

Support the joints: Small gaps between adjacent panels allow for swelling due to moisture changes without buckling. Gaps of 3⁄32 of an inch are typical.

Subfloor problems include the following:

Rot and Insect Damage
Damage can be caused by moisture or insects (especially in wet or rotted wood). We’ve talked about this with respect to other wood members. Rotted subfloors are common around toilets, bathtubs and shower stalls. Rotted subflooring also can occur below radiators on heating systems. Anywhere that water might leak, rotted subflooring could be an issue.

Rotted subflooring also may be found around building perimeters where there is exterior wall or window leakage or condensation that gets hung up on subflooring.

Subfloor damage is common at exterior doorways, particularly at sliding glass doors. Sliding glass doors often have condensation. Subflooring may be rotted along the entire length of the door. Watch for this from below or, if you can lift up an edge of the finished flooring, you also might be able to see the damage. 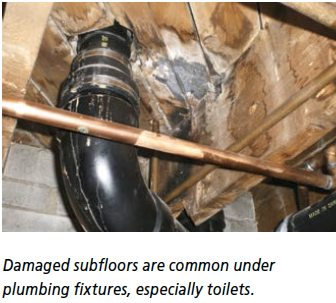 Overspanned or Undersized Subflooring
This is an installation issue. Subflooring should not deflect more than 1/360 of its span. Weakened or undersized subflooring can make flooring spongy. Often, this is a localized issue. A weakened joist will cause subflooring to be springy in that area. Diagonal subflooring with unsupported ends at walls is common.

Damaged or Cut Subflooring
Mechanical damage may be done by tradespeople or homeowners. Many people cut through subflooring recklessly to accommodate ductwork or piping. Re-supporting may be necessary. In carpeted rooms, it’s common to find that an opening was cut for a heating register in the wrong place. The heating register was not provided, but the hole in the subfloor gets carpeted over. Whenever someone steps on that area, the floor is very weak. Repairs are easy if the subfloor is accessible from below. 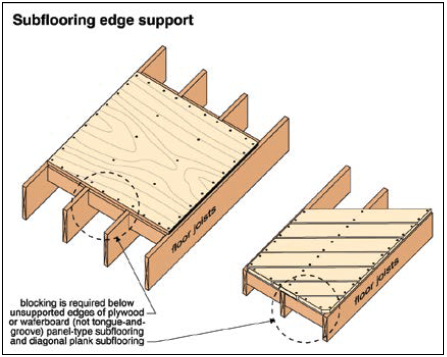 Concentrated Loads
Pianos, columns or heavy pieces of furniture with only four legs can create large point loads that can deflect or crack the subfloor. Watch for evidence of this and recommend re-supporting from below the subfloor. 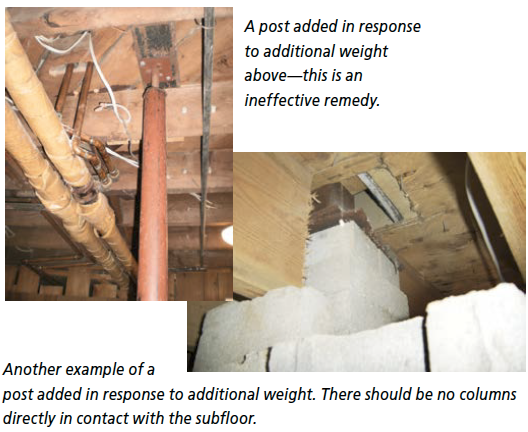 Final Note
In this article, we’ve covered many of the main conditions with subfloors as part of the structural floor system. In the ASHI@Home training program, you can learn many more details about this and other building issues and inspectionstrategies.

Other flooring articles in past Reporters: