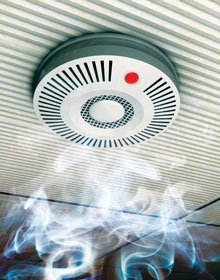 The Word’s subject this month is smoke alarms and carbon monoxide alarms. The Word finds this subject interesting because there’s a lot more to dealing with these devices than just pressing the test button. By the way, smoke alarms and smoke detectors are not the same. A smoke alarm is a self-contained device including the smoke sensor and an alarm. A smoke detector contains a smoke sensor and is intended to be a part of an alarm system.

Alarms Save Lives
There’s little dispute that smoke alarms and carbon monoxide alarms can save lives assuming, of course, that they are installed correctly and functioning properly. These relatively inexpensive devices provide some of the best bang for the buck of any health and safety requirements. In fact, these devices are considered to be so important that updating homes to current standards may be required in some cases. The Word did this in a 1980 home that he and his wife remodeled.

Exceptions exist that relieve smoke alarm hard-wiring and interconnection requirements that would require disturbing finish surfaces. Interconnection can be accomplished with listed wireless technology. Interpretation and enforcement of these updating requirements and exceptions vary widely between jurisdictions.

Fire Types and Smoke Alarm Types Are Different
Fires often start in one of two ways. Some fires start by producing a lot of flame, but little smoke. Other fires start by producing a lot of smoke, but little flame. There are two types of smoke alarms. The most common type is the ionization alarm. The less common type is the photoelectric alarm. Each type of alarm responds differently to each type of fire, so it’s very important to have the right type of alarm. Having the wrong type of alarm can be fatal.

A photoelectric alarm works by shining a light above a sensor at a 90˚ angle to the light. Smoke entering the alarm disrupts the light, reflects some of the light toward the sensor and triggers the alarm. Photoelectric alarms are good at detecting smoky (smoldering) fires, which is the way many home fires start. They are slightly less responsive than ionization alarms at detecting flaming fires.

An ionization alarm works by using radioactive material to ionize the area between two sensors and allow the flow of electricity between the sensors. Smoke entering the sensor disrupts the flow of electricity and triggers the alarm. Ionization alarms are slightly better than photoelectric alarms at detecting flaming fires. They are significantly less responsive at detecting smoky fires, and in fact, may not even activate until it’s too late, if at all.

It is usually not possible to identify the smoke alarm type by looking at it from below. The type is usually on the back and requires removing the alarm from its mounting bracket to identify its type.

False (Nuisance) Alarms
The best smoke alarm in the world is useless if it has been disconnected or removed. False alarms, caused by activities such as cooking or burning candles, motivate people to disconnect or remove the alarms. A disconnected alarm might be very difficult to detect visually during a home inspection. Some alarms have no visible indication whether or not they are receiving power. Newer alarms have an indicator that at least shows if they are receiving power, and some even show by the indicator’s color where the power is coming from (for example, green = house power and red = battery). There are several places where smoke alarms shouldn’t be installed to help avoid false alarms. The Word lists these places later in this article.

Smoke Alarm Testing
Being a conscientious inspector, you may want to go beyond the minimum standard and test the alarm. Be careful—testing alarms and reporting the results can be a case in which no good deed goes unpunished.

When you test an alarm by pressing the “test” button, you may be testing only the sound-producing device. You may not be testing the alarm’s sensor. There are UL-listed aerosol smoke products for testing smoke sensors, but such testing goes way beyond the SoP requirements. Do not use a smoke pen or other unlisted smoke-generating device to test a smoke alarm. The result could be inaccurate and you could damage the alarm.

The alarm won’t activate if the sensor isn’t functioning and, as we now know, pressing the “test” button may not test the sensor. Thus, pressing the “test” button doesn’t ensure that the alarm will function as intended during an actual fire or under carbon monoxide conditions. It’s critical that you inform your clients about this distinction if you “test” smoke and carbon monoxide alarms and report the test results. 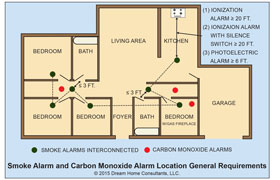 Alarm Service Life
How often do you see smoke alarms in older homes that are obviously the original alarms? The Word sees this all the time. These alarms may be useless and may, in fact, be dangerous because they provide a false sense of security.

Many smoke alarm manufacturers recommend replacing smoke alarms after about 10 years. Sure, they want to sell more alarms, but there’s also a valid reason for this recommendation. The sensors in these alarms degrade over time and may fail to function. As we’ve discussed, if the sensor fails, the alarm is useless.

Smoke Alarm Locations
The minimum requirement of a smoke alarm in each bedroom and in the hallway near the bedrooms is widely known. What constitutes “near” the bedrooms is open to interpretation. The Word has seen distances ranging between 10 and 40 feet. Bedrooms located in different parts of a home should have a smoke alarm in the hallway near each bedroom area.

The 2015 IRC adds a new required location. A smoke alarm should be installed not less than three feet horizontally from the door of a bathroom containing a tub or a shower. Anyone singing in the shower needs to hear the alarm, too.

At least one smoke alarm is required on each story, including basements and habitable attics, but not including crawl spaces and uninhabitable attics. In fact, smoke alarms and carbon monoxide alarms shouldn’t be installed in crawl spaces and attics because the alarms don’t function properly in these dirty and unconditioned environments.See Illustrations 1 and 2 for general location requirements. 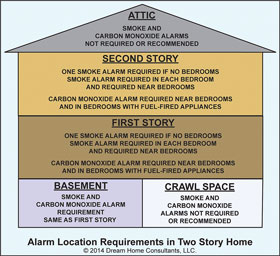 The ideal smoke alarm location is on the ceiling at least four inches away from the wall. Installation on the wall is acceptable if the top of the case is at least four inches and less than 12 inches from the ceiling. The four-inch distance helps avoid dead-air spots that may prevent smoke from reaching the sensor. Smoke tends to collect near the ceiling, so the 12-inch distance helps ensure that rising smoke reaches the sensor). Look for this. The Word had two alarms moved during his remodel because of this issue. 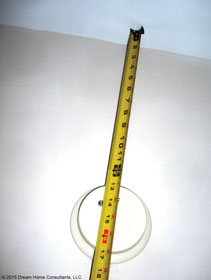 Other places that smoke alarms should not be installed include the following:

Carbon Monoxide Alarm Locations
In new construction, at least one carbon monoxide alarm is required in homes with a fuel-burning appliance and in homes with an attached garage. Remember that a fireplace is a fuel-burning appliance. The alarm should be located near the bedrooms and if the bedrooms are widely separated or are on different stories, then multiple alarms are required.

The 12-inches-to-ceiling-location restriction does not apply to carbon monoxide alarms. In fact, a lower location on a wall may be advantageous in providing a more rapid response to the presence of carbon monoxide. Just be sure that the alarm is above the reach of children.

Carbon monoxide alarms are not required to be connected to each other, but the 2015 IRC requires them to be powered by the building’s utility power source with battery backup.

The Bottom Line
The best inspections and reports go beyond simply listing deficiencies. They educate clients about important maintenance and safety issues. The Word recommends that you include the following in your reports:

Adding these statements will go a long way toward educating your clients about these important safety devices and may help protect you if a problem occurs.

Memo to the gods of safety: The Word does not reside on Mt. Olympus (just at its base) and welcomes other viewpoints. Send your lightning bolts or emails to Bruce@DreamHomeConsultants.com. The thoughts contained herein are those of The Word. They are not ASHI standards or policies.

Bruce is the founder and president of Dream Home Consultants, and the author of Everybody’s Building Code, written to help home inspectors understand the International Residential Code.

Bruce has been building and inspecting homes since 1987. He currently serves on the ASHI Board of Directors. He is a certified Residential Combination Inspector, a licensed contractor in Arizona, Florida and North Carolina,

To read more of Bruce’s articles or if you need a presenter at your next chapter event, go to www.dreamhomeconsultants.com.