Before 1850, most slate in the United States came from Wales. Slate used in Canada also came from Wales, or in the latter part of the 19th century, from Newfoundland. During the last 100 years, American slate has been quarried in Pennsylvania, Vermont, western New York and Virginia. Generally speaking, Pennsylvania slate is estimated to last 35 to 75 years, although there are exceptions at both ends of this scale. Vermont slate is expected to last at least 100 years and Buckingham slate from Virginia is thought to be good for roughly 175 years. Since it is a natural product, the life expectancy varies.

It is beyond the scope of a home inspector to be able to evaluate the quality of the slate or to predict with confidence its life expectancy.

Beware of imitations! Some concrete, clay, fiber cement, plastic or rubber (from automobile tires) roof coverings are designed to mimic the look of slate. These products are generally less expensive and less durable than slate. Do not describe something as slate unless you are absolutely sure. You don’t want to have to buy someone a slate roof because you mistakenly told a client they had one when, in fact, they did not.

Styles of Slate Roofs
Standard: The most common style, slates of uniform length and thickness are installed in a conventional shingling pattern. 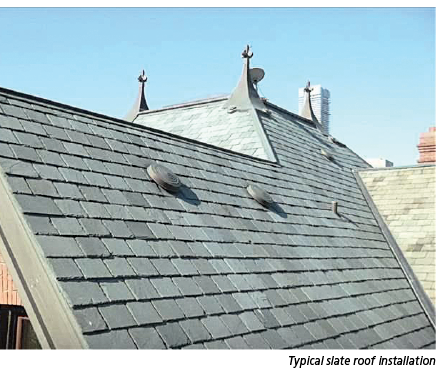 Textural: This style uses rough-textured slates with uneven butts and varied thicknesses. The slates are often different colors and sizes, giving this installation a rustic look.

Graduated: This style adds dimension to the roof by having the exposure, size and thickness of the slate decrease as you move up the slope. The slates at the bottom can be as much as 11/2 inches thick and at the top, about 3/16 inches thick. This makes the roof look larger than it is. This is considered to be a sophisticated, high-quality installation.

Flat: A flat slate roof can be installed over a built-up roof. The flat slates are used instead of gravel to reflect ultraviolet light, act as ballast and provide some fire resistance. They are not part of the waterproof membrane.

Slate Roofs Are Expensive
Slate is expensive to produce because much of the work is done by hand. Blocks of slate are split from the quarry into pieces roughly 8 inches by 8 feet by 4 feet and then sawn into 2-inch slabs after inspection. The slabs are hand-split to 3/16-inch to 1/4-inch thickness. Lastly, the slates are punched or drilled for the nail holes.

Slate roofs are also expensive because shipping stone is not cheap. The lightest slate roofs weigh 650 to 800 pounds per square.

Also, cutting slates on site is more difficult than cutting asphalt or wood shingles. By way of comparison, on average, a worker can lay one square of slate per day or 10 squares of cedar per day. Labor costs also are higher due to the weight of the material.

Facts About Slate
Slate dries out after it’s been quarried. It usually has to be split fairly soon after it is quarried. It is more difficult to split after it has dried. Frozen slate cannot be split.

Slate is effectively non-absorbent. Absorbency rates of roughly 0.2% are common.

Slates can be weather-tested by means of using acid and then measuring the thickness of the slate that has been attacked by the acid. Rupture tests, for example, are not particularly important because the slate is much stronger and more rigid than it needs to be to perform its roofing task.

Some maintain that slate is relatively porous. Evidence and experience are to the contrary. The slate is a relatively non-porous stone when split properly.

Slate is available in several colors, including black, gray, purple, red, green, blue-black, blue-gray, mottled purple and green. Slate colors can be either “unfading” or “weathering.” Weathering slates change color as a result of the oxidization of the ferric (iron) minerals in the slates.

Slate Ribbons
Some slate (especially from Pennsylvania) has ribbons of different materials. These ribbons can often be identified by their color and texture. Ribbons are considered imperfections, for the most part, and on a good-quality slate roof, ribbons should not be visible. Installers try to avoid having the ribbon section of the slate exposed to the weather. In some cases, the ribbon is on one side of the slate and not the other. Laying the ribbon down facing the building is a better practice.

Securing Slate Roofs
Slates are nailed to the roof—ideally, using copper or stainless steel nails. Galvanized nails do not last as long as the slates.

Slates are usually punched at the quarry so they can be nailed onsite. Although it is possible to drive a nail through a slate, the punching, which is done from the back of the slate, leaves a ragged hole in the front of the slate that acts as a countersink. The nail head should not sit proud on top of the slate. This would cause the overlaying slate to rock back and forth on the nail and possibly crack.

Slate nails have very thin heads so that they can fit into the countersink and present a flush surface to the overlaying slate. The possibility of proud nail heads is one of several good reasons not to walk on a slate roof.

Generally speaking, slates should not be pinned to the wood decking tightly, but instead, they should hang on the nail. Most slates are installed with two nails about one-third of the way down from the top of the slate. Large slates are held in place with four nails. In some areas, hooks are used rather than nails and some new support systems present a good alternative to nailing. In some cases, slates are secured with stainless steel wires. 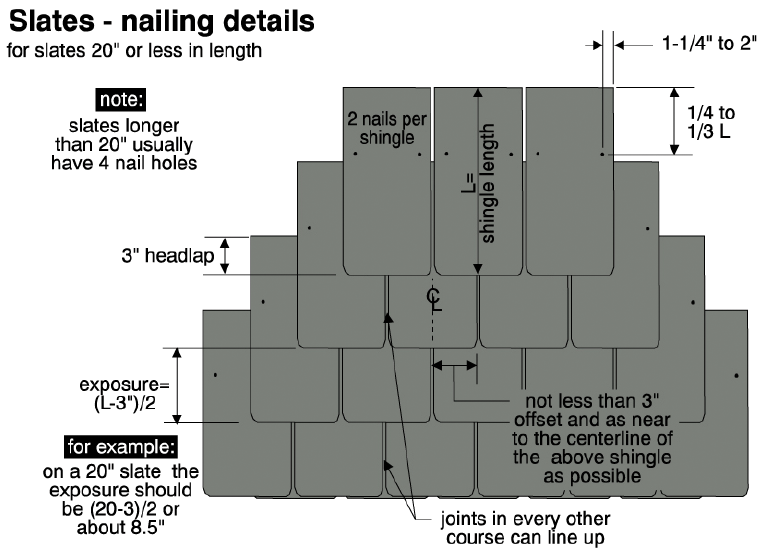 When this is done, there are usually four holes drilled in the slate.

Some buildings use slates that have been salvaged from another building, or removed and reinstalled during a renovation. When inspecting, focus on the performance and not the age of the slates.

In regions where there is a risk of heavy snowfall, avalanche guards are common on slate roofs and can be a source of leakage. Watch for watermarks around and below avalanche guards.

Thickness: 3/16 inch to 2 inches (3/16-inch and 1/4-inch are most common). There are typically two thicknesses of slates over most of the roof surface.

Number of Fasteners: Two nails per slate is typical, four nails if the slate is more than 3/4 inch thick. Nail holes are located one-quarter to one-third down the length of the slate from the top.

Conditions
Slate roofs commonly fail because the slates wear out, the fasteners or flashings wear out, slates are mechanically damaged, the installation was poorly done or a combination of these factors.

The slate itself will eventually break down. As the slate deteriorates, it usually develops a whitish surface, often in the form of a ring around the sides and bottom of the slate. As deterioration progresses, the surface of the slate often turns brown. Delamination typically occurs from the perimeter in toward the center and the slate eventually disintegrates. Depending on the type of slate and the climate, this is caused by moisture, and is accelerated by the cycles of freezing and thawing. 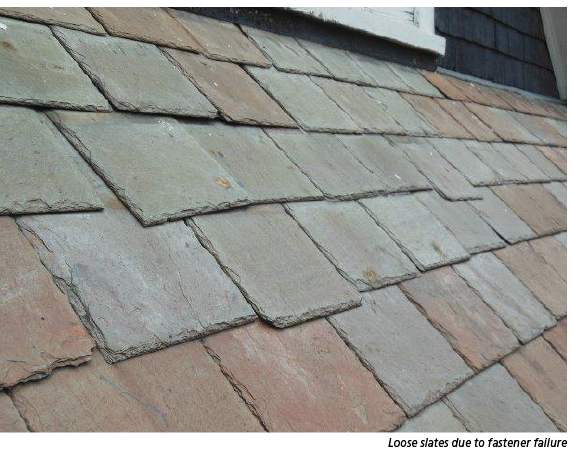 Slate that is soft or flakes easily when you touch it is likely to be near the end of its life.

Slates are vulnerable to mechanical damage. Although they are quite strong, they also are brittle, so if a heavy tree branch drops on them, they will break. Nailing too tightly or allowing nails to sit proud also will result in breakage.

Use Caution When Inspecting Slate Roofs
Due to the high risk of slate damage and personal injury, we strongly recommend that you do not walk on slate roofs. As a result, it may be difficult to see any cracked slates. You should make your client aware of this limitation.