Once again The Word invites you to travel into the dark realm of subjects that are sometimes misunderstood by home inspectors. The Word hopes you will find this trip informative and maybe a little entertaining.

This month we continue our discussion of “Siding A B Cs.” The Word finds this topic interesting because we are required to describe the type of exterior wall covering and inspect it as well. It helps to know a little about some of the many different types of siding we might encounter. This month we devote the column to one wall covering, brick veneer.

B is for Brick Veneer

Bricks have been around since people started building permanent structures. Brick veneer remains one of the most popular wall coverings in many markets, especially in higher end homes. Most of what we discuss here also applies to natural stone. Both brick veneer and natural stone veneer are called anchored veneer because they are anchored to the structure using strips of metal or wires called wall ties. This anchoring helps stop the veneer from bulging out and rotating away from the structure.

Bricks used as veneer (face bricks) are available in many sizes. The most common size in the U.S. is the modular brick which is 3½” deep by 7⅝” long by 2¼” tall. You may also see larger queen and king sizes, but these are uncommon in residential construction as are the numerous other brick sizes.

Bricks are a good wall covering material. They are impervious to most types of deterioration and damage. Their one weakness is water. Bricks are hydroscopic, meaning they absorb water. Most of the time, the water evaporates without causing problems. There are two situations where water in bricks causes problems. One situation occurs when the water freezes or remains long enough to cause the bricks to deteriorate. Outer layers of the bricks break loose, a process called spalling. The other situation occurs when the sun heats water in bricks to the point of evaporation. The water vapor can be driven into the wall cavity where, under the right conditions (air conditioning), it condenses into liquid, damages wood framing, and provides the moisture fungi need to grow.

Brick veneer requires little, if any, maintenance. Once cleaned after installation, it is usually best to leave bricks alone. This is especially true for bricks that receive a thin coat of material that provides the color. Aggressive pressure washing and use of acid-based brick cleaning solutions will remove the color layer and result in a cosmetically displeasing appearance.

M is for Mortar

Bricks are bonded to each other using mortar. The standard mortar joint size is ⅜ inch. Masons will occasionally attempt to compensate for dimensions that don’t work out to the size of bricks they’re using by varying the mortar joint size. This is acceptable so long as the joint size does not vary too much from ⅜ inch.

Mortar joints are usually tooled, a process that removes some of the mortar from the joint. The best joints are the concave (an inward partial circle shape) and the V joint. These joints allow water to flow past the joint while still providing a decorative appearance. Any mortar joint that leaves a shelf for water to collect on the lower brick (raked and struck joints) is a potential water problem and should be reported. See Illustration 1. 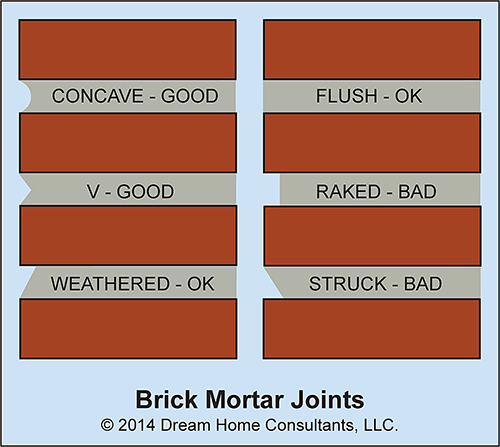 Mortar can deteriorate too, usually because of water exposure. Scraping out and replacing the deteriorated mortar is called repointing. Repointing is a labor-intensive and costly process when large areas need work, so look for signs of mortar deterioration such as absent mortar. Chimneys are especially prone to mortar and brick deterioration.

Speaking of chimneys, mortar that is exposed to sulfur and water can expand and cause the chimney to curve. This phenomenon is called sulfation and is most likely to occur in old unlined chimneys that have been used as a vent for oil-fired appliances. Sulfation can occur in other brick structures that are exposed to frequent wetting and can be a reason for cracking and distortion of bricks and mortar. Sulfation is not common in residential structures, so don’t think of it first when looking at brick veneer and brick chimneys.

L is for Lingo

Like most occupations, brick masons have their own lingo that is helpful to know when you are describing deficiencies. Each horizontal row of bricks and mortar is a course. Bricks are laid in one of many patterns called a bond, the most common being the running bond where each vertical joint is offset one half of the brick’s length. A wythe (also spelled withe) is a vertical wall of bricks one brick thick. Brick veneer is almost always one wythe thick. At least one wythe should separate flues in a chimney.

Bricks are installed with different sides exposed and in different orientations. Bricks are usually installed with their long side horizontal. Bricks in this orientation are called stretchers. Bricks installed with their long side vertical are soldiers (narrow side out) or sailors (wide side out). Soldiers and sailors are often used above windows and doors for decoration. If the short side is horizontal and faces out it’s a header. Bricks set at a downward slope under windows and other openings are called a rowlock. See Illustration 2. Bricks at corners are sometimes offset an inch or so out from the vertical plane to create a decorative effect called a quoin (pronounced coin). 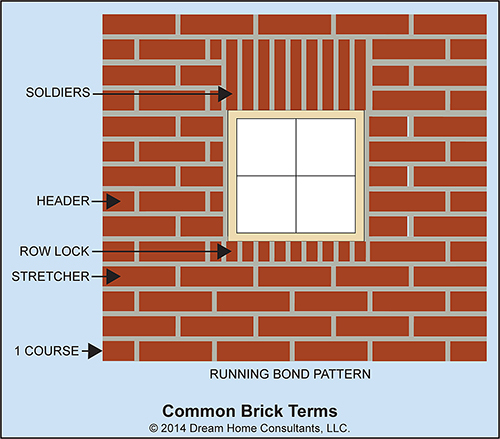 Corbelling is when bricks are offset in the vertical plane. Corbelling is common when increasing or decreasing the width of a chimney. Corbelled courses should use solid bricks, not bricks with holes. Sometimes you’ll see a thin coat of mortar to hide the holes where the bricks are corbelled. See Illustration 3. 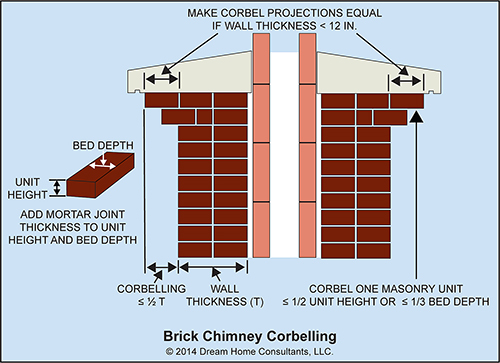 S is for Support

At least 4 inches of each lintel above openings should be supported by the bricks on each side of the opening. The lintel should be painted. Rusted lintels can expand enough to cause cracks in the mortar. You should report rusted lintels even if they haven’t caused cracking, yet.

Lintels over openings often support a significant load, so they must be large enough to support the imposed load. Determining if a lintel is the correct size is out-of-scope for a home inspection. Besides, we can’t usually see the lintel’s vertical section so there’s no way for us to know the lintel’s size. We can, however, look to see if the lintel is sagging. If it is, that’s a significant reportable deficiency.

Brick veneer may be supported by framing, but not directly on framing. The bricks must be supported on a lintel. The lintel usually is not visible during the inspection because it is (or should be) concealed by flashing. There is one thing you should be able to see when brick support transitions from framing to foundation, the movement joint. 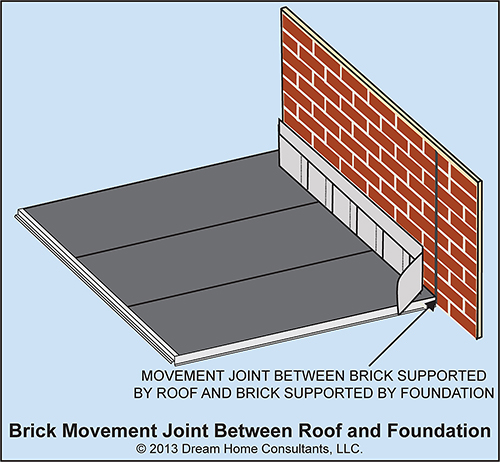 F is for Flashing

Flashing and weep holes should be installed above and below windows, above doors, below the first brick course above finished grade, and at each floor level. The flashing should extend to the brick veneer surface. Weep holes should be at least 3/16 inch in diameter and should be spaced at least every 32 inches. See Illustration 5. Flashing as described here is unusual in older construction; heck, it’s unusual in some newer construction. Whether you report lack of weep holes as a deficiency is a judgment call. The risks of not having weep holes certainly deserve mention for older structures. The Word reports this as a deficiency for newer construction. 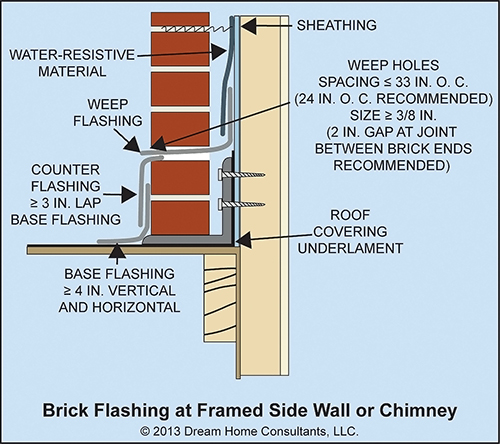 C is for Cracks

Don’t you hate finding cracks in brick veneer? Sometimes it’s hard to know how to report them. These are obvious brick veneer deficiencies that are easy to report:


Cracks near the corners of long brick veneer walls may be caused by expansion of the bricks and may indicate lack of an expansion (movement) joint. We discussed movement joints earlier when we discussed brick veneer supported by different components (framing and foundation). Vertical expansion joints should also be installed about every 20 feet to account for expansion of brick veneer; however, The Word does not recall seeing one and doubts if they are common.

Those small cracks in the mortar are the scary ones. Whether they are long horizontal cracks or stair step cracks, it’s hard to know what to recommend. You should certainly report their presence. Monitoring is often the appropriate recommendation for hairline cracks that are only in the mortar. Evaluation may be appropriate if the crack is wide enough to insert a dime.

Reporting cracks in brick veneer boils down to experience in your local market. What is appropriate in North Carolina may not be appropriate in California. Newer inspectors should ask more experienced inspectors for advice. Chapter meetings are an excellent place for this.

Brick homes have a special place in our culture, even if it’s just brick veneer. After all, how many building materials are featured in a children’s story? Part of our jobs as inspectors is to make sure that the little pig installed the bricks and flashing correctly so that the Big Bad Wolf (or a hurricane) won’t blow the house down.

Memo to Hestia (goddess of the home and hearth): The Word does not reside on Mt. Olympus (just at its base) and welcomes other viewpoints. Send your lightning bolts or emails to Bruce@DreamHomeConsultants.com. The thoughts contained herein are those of The Word; they are not ASHI standards or policies.