All shower stalls leak. They don’t necessarily leak when you are doing your inspection, but eventually, they all leak. Worse than that, shower stalls are very expensive to replace. Worse yet, the leakage can be slow and cause considerable damage without being particularly visible. Be very, very careful with shower stalls. Either the base or the enclosure may be the culprit, but the result is similar.

One-piece fiberglass or acrylic: This type of shower stall is the least likely to leak because the floor and walls are made of a single unit. 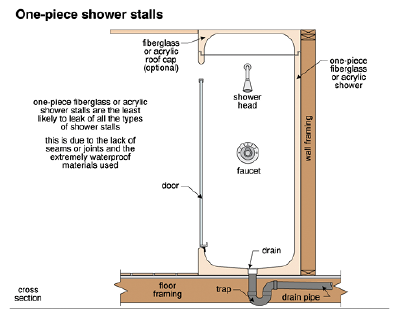 Three-piece fiberglass or acrylic: This is the next best type of
shower stall, in which the bottom third, middle third and top third all fit together.

Prefabricated china bases: These are sometimes used for shower stalls, although they are unusual. 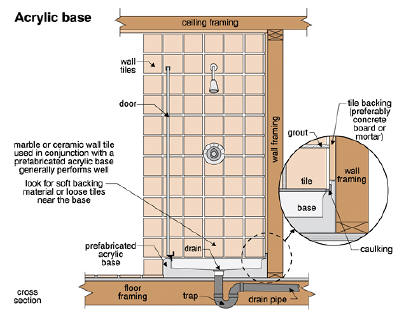 Mortar bed ceramic tile: This is the most popular type of shower stall. Leaks at and around the base are the most common problem.

Prefabricated foam sub-bases for shower stalls: Often, these are sold as part of a system, with a proprietary waterproofing membrane and drain.

Metal: Some shower stalls are made entirely of metal, including a metal base or floor and metal walls. Some of the bases are concrete over metal. These are usually low-quality and are prone to rusting. 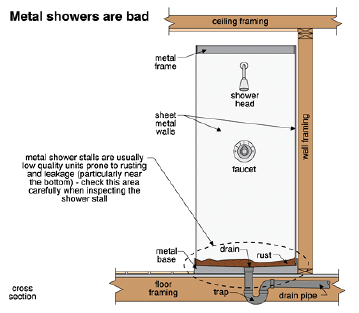 Ceramic or marble tile: These types of shower stalls are much more troublesome, although what’s really important is the base material. For shower stalls that are ceramic tile or marble, the base usually is manufactured on site and the floor of the stall is tiled as well. These bases don’t last forever.

Bases of Shower Stalls
Let’s look at the base of a site-built shower stall. In most cases, we start with a wood or concrete subfloor, and the bottom half of the drain assembly is in place. Shower stall drain assemblies usually have weep holes in the lower half to allow any water that gets through the tile to run along the liner and into the drain through these weep holes. 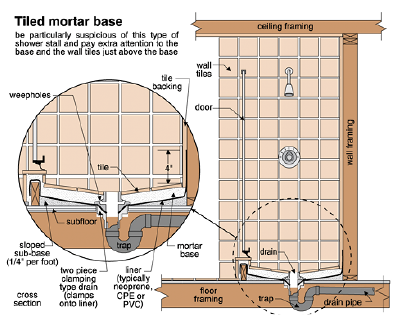 Ideally, the first step of installation is to put down a sloped (¼-inch per foot) mortar sub-base; however, this step often gets omitted.

The next step is to put in a membrane-type liner. Older liners were typically copper, galvanized steel or lead. In some areas, hot mopped asphalt and Type-15 felt paper pans were used. Newer liners often are made of PVC or bonded polyethylene sheet products—a single sheet of material that covers the floor of the shower stall with an opening for the drain. These liners are turned up the wall, usually at least 3 inches above the finished threshold. Some areas require the liner to extend 9 inches up the wall and a solid continuous backing for the liner. Find out what is accepted by your local authority.

Once the liner is in place, the top half of the drain assembly is installed, sandwiching the liner between the top and bottom half. Installation details of newer drain products with integrated bonding flanges may differ slightly.

The next step is to put in a mortar base on top of the lining that follows the slope of the sub-base down toward the drain. Finally, the tile is installed on this mortar base.

Floors Should Slope
All shower stalls should have a slope of at least ¼ inch per foot in toward the drain. The drain obviously should not be at a high point to avoid allowing water to “pond” on the floor of the shower stall.

Sills and Thresholds
Shower stalls need to have some entrance point for people to get into them. They will have a curb or sill at the entrance, and it may form a door threshold if there is a shower door rather than a curtain. Typically, the finished sill or threshold should be 3 inches below the top of the liner. Although you won’t be able to determine this, it’s good practice to have the liner (mentioned previously) extend out over the sill or threshold and be sealed tightly along the sides. This is not always done. Sill damage is common.

Toe Testers and Mixing Valves
Faucets and nozzles for showers are some of the most complicated supply piping in the house. There is often a diverter valve in both bathtubs and shower stalls. Although we never want to fill a shower stall with water, a spout often is provided near floor level. Some people call this a toe tester and it’s used to get the water to the right temperature before turning on the showerhead. Depending on how the shower is arranged, it’s nice to be able to get the hot and cold water mixed appropriately before soaking yourself with shower water. 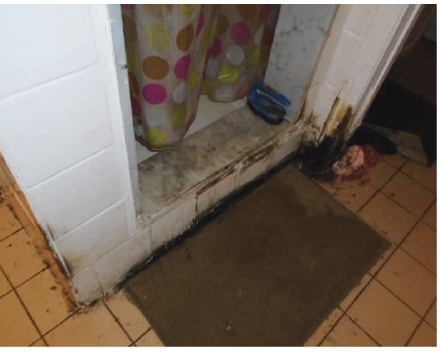 Leaks
Leaks are a big issue. There are many places in a shower enclosure where water can leak. We’ve described problems with the enclosure itself, and with the penetrations and joints. We’ve also described the complicated base construction of a mortar bed shower stall and the potential for leakage there. Leaks are always possible through the supply and drain piping as well.

One of the tests that many home inspectors perform is a flood test of the shower base itself. Some inspectors plug the drain of the shower stall and flood the base with an inch or two of water. Obviously, we don’t want to get the water up over the sill or door threshold. This is a fairly rigorous test. The longer the water stays, the more rigorous the test. Some specialists say the water should stay for 24 hours!

This test does not necessarily simulate normal usage and it has the added disadvantage of the delayed reaction. In some cases, it will take several hours for the leaks to appear. Obviously, in most cases, a home inspection is not going to last several hours. We’ll leave it to you to decide whether you do this type of test. It goes beyond the ASHI Standard of Practice, but the results certainly can be revealing.

In one sense, you’re not going to see many leaks related to the shower stall by looking inside the stall. You need to be looking around and below for leaks, rather than inside, for the most part. Remember to check the walls and floors in rooms adjacent to the stall. Moisture meters can be effective tools for detecting moisture or leakage in areas adjacent to the stall. Look for signs of previous patchwork or damage. Excessive caulking around the stall should raise a red flag.

Entrance Problems
Look for a minimum entrance width of 22 inches for shower stalls. You should report on shower stalls with entrances that are narrower than 22 inches. Also watch for doors that are not made of tempered glass. In most cases, you’ll find an etching in the corner of the door that indicates that the glass is tempered. This won’t always be obvious, however. If you can’t verify that the door is tempered, you might want to raise the question, although this also goes beyond the ASHI Standard.

Another problem is a shower door that only opens inward. There are two disadvantages to this design. First, if the water temperature suddenly gets very hot, a person can’t get out of the shower quickly. A bigger problem is created if a person collapses in a shower stall and falls against the door. In these cases, it can be very difficult to get the person out of the shower. Shower stall doors should open outward.

Sill and Threshold Problems
Sills and thresholds at shower stalls should be watertight and tall enough to contain the shower water. Poor original construction or maintenance can lead to leakage at and around sills and thresholds. Sills and thresholds that are too low are an installation issue. These problems are common in houses with people who are elderly or who have disabilities.

Check sills or thresholds carefully. If they are made of tile or marble, make sure they are well-secured and intact. Ideally, the sills should have a slight slope back into the shower stall so any water that lands on the sill or threshold will drain back into the stall, rather than out onto the floor. With every shower stall, part of your normal routine should be to check outside the sill or threshold carefully for evidence of water damage. It may have been freshly painted, so you may have to be persistent. It’s unusual to find no evidence of leakage around and below shower stall sills and thresholds. 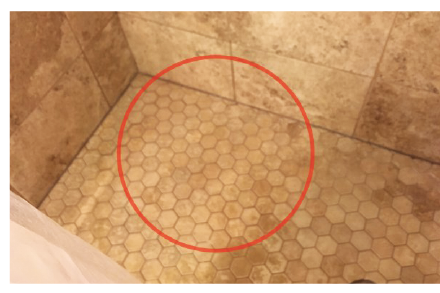 Shower Stalls That Are Too Small
Custom-made shower stalls can be any size. Some are extremely large and have multiple shower fixtures. Some have seats. All of this variation is fine, but you should watch for shower stalls that are too small. Generally, 30 inches by 30 inches is a minimum size.

Shower stalls that are too small may trap a person who collapses in the shower. Although it’s not necessary to measure each shower stall with a tape measure, you should have some sense of how big a 30-inch-by- 30-inch shower stall is and make a note in your report if the shower stall you see is significantly smaller.