Should home inspectors walk through insulated attics to fully inspect the attic spaces? I say no. This topic was recently discussed in an online forum for home inspectors and I was surprised by the number of chest-pounding home inspectors who are willing to trample through the insulation in an attic to inspect the farthest reaches. One of my goals is to leave houses the way that I found them and leaving footprints throughout an attic does not align with that goal.

In most new-construction attics, there are enough trusses to climb on to make footprints unnecessary. The images below show some examples of how we do this. 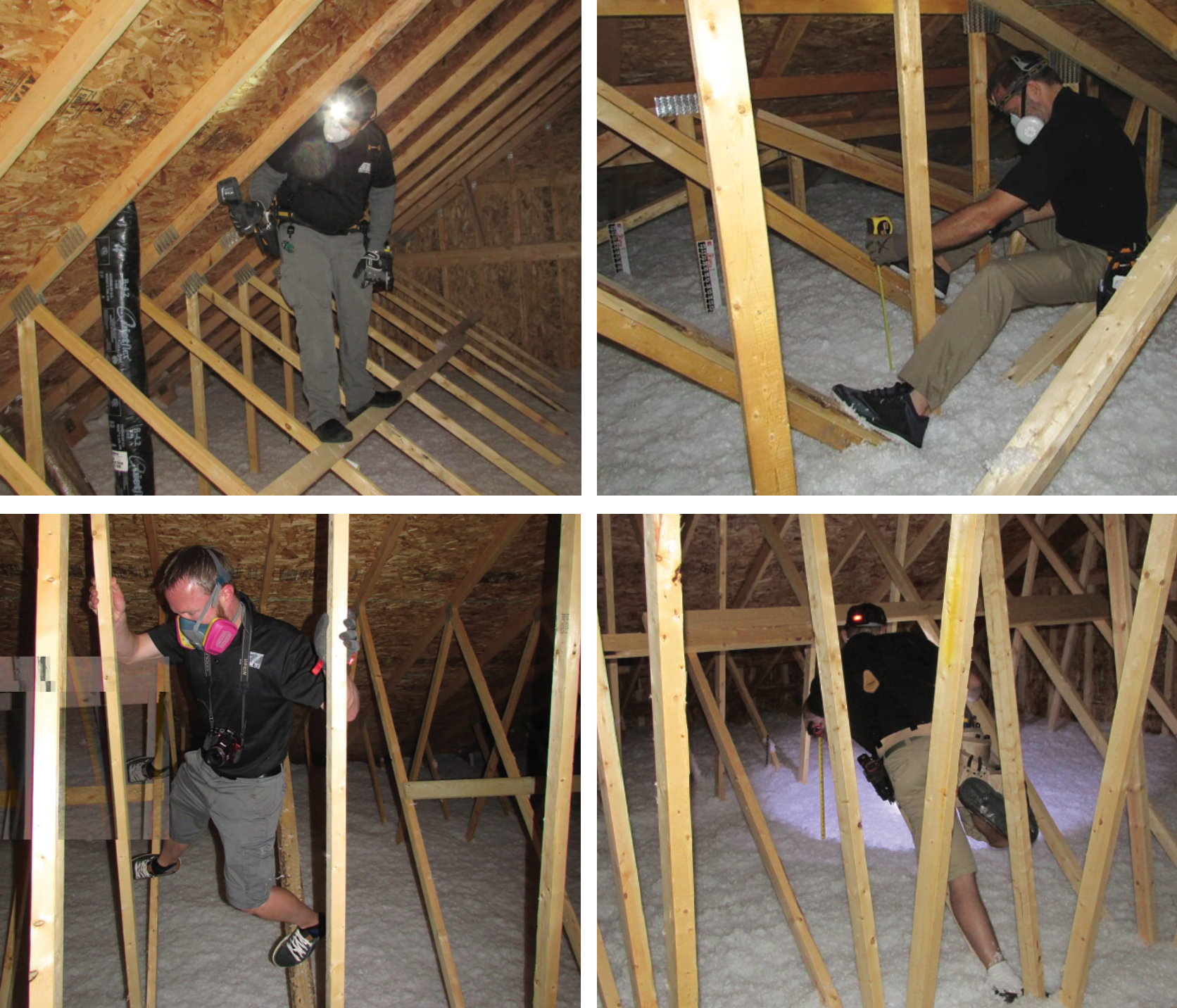 That’s not to say I’ve never left footprints in attics; I’ll do it if I have a very compelling reason. Once done, I do my best to “fluff up” the insulation or kick it back over to help cover my tracks. It’s not perfect, but it’s not a big deal from an energy standpoint.

Besides the concern with trampling insulation, walking through an insulation-covered attic floor has the potential to cause damage to the home. I’ve come very close to stepping on recessed lights and bath fans many times, but I’ve been lucky enough to have never caused any of that kind of damage. Knock on wood.

I haven’t always been lucky in attics, however. Many years ago, while inspecting an attic on a home with another inspector in my company, my inspection of the attic caused a pretty nasty plumbing leak. While walking around in a minimally insulated attic, I accidentally stepped on a concealed plumbing vent. I thought I was stepping on framing, but the plumbing vent was hidden below the insulation. I felt the vent move a little, but I didn’t think anything of it. I pushed away some of the insulation to check for an attic bypass (https://structuretech1.com/attic-bypasses/) around the plumbing vent and sure enough, there was no sealant around the vent, so I took this photo. 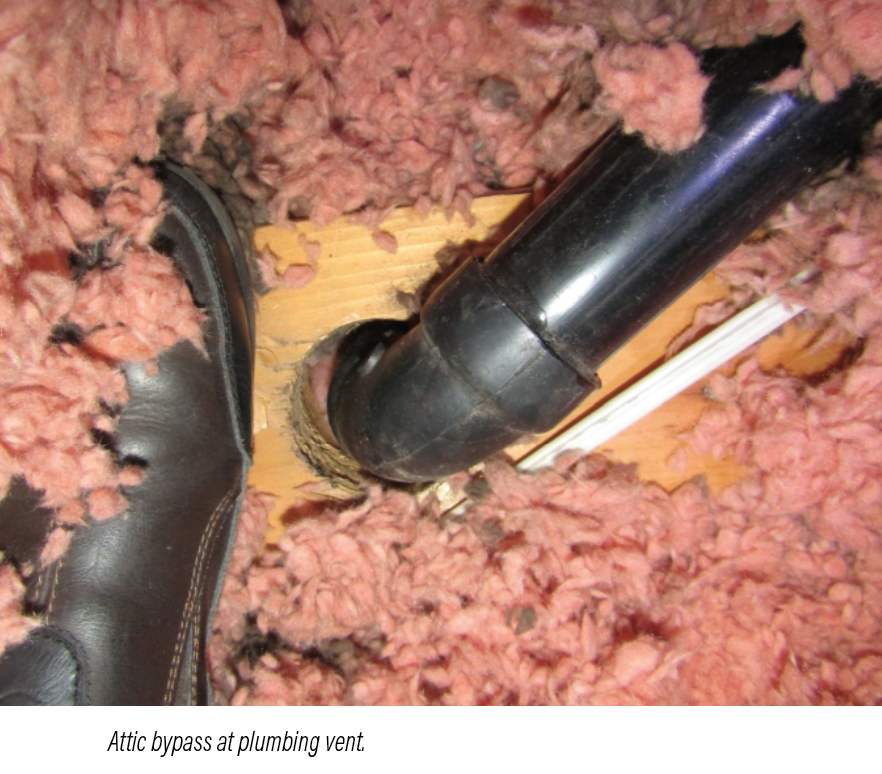 Later in the inspection, as my fellow inspector was inspecting one of the guest bathrooms, I heard him call for me. He had filled up the bathtub with water, removed the access panel behind the tub to check for leaks at the overflow and started draining the tub. As soon as the tub began to drain, water leaked out of the drain like crazy, saturating the floor and leaking into the garage ceiling below. He immediately stoppered the tub drain, but a lot of water had already leaked through.

Here’s a photo showing the drain below the tub: 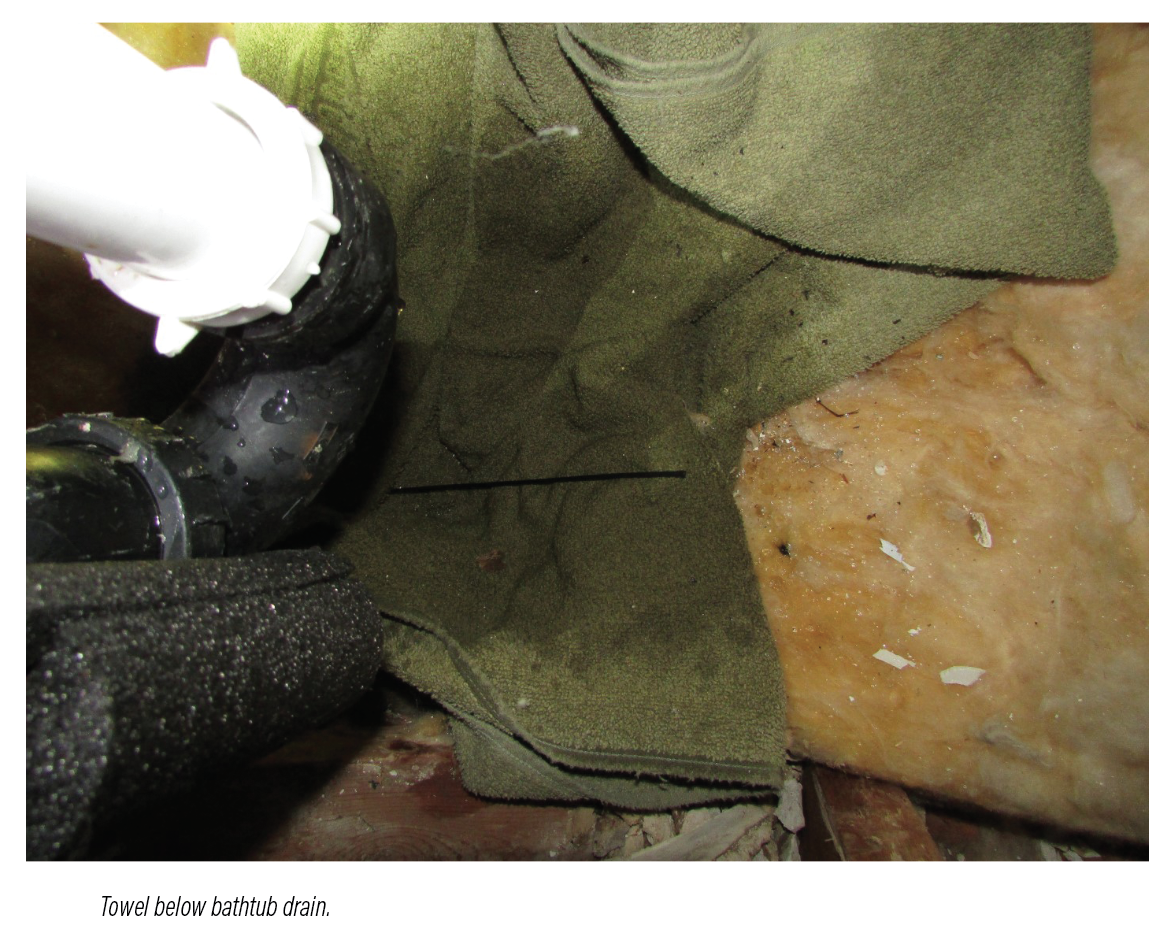 You’re looking at soaked insulation and a soaked bath towel. Yes, that towel was there before the leak happened, which indicates that this had probably leaked in the past. We went down into the garage to survey the damage and we took a video to document what happened.

You can see that video by navigating to this address: https://youtu.be/X3Uv6sIcDBY

Nasty, right? We did our best to clean up the mess in the garage and then carefully inspected the bathtub drain. It turns out that the slip joint for the drain was completely disconnected, which is what caused the leak. I reconnected it and let the rest of the bathtub water drain, and it worked fine after that.

This home appeared to belong to empty nesters and our assumption was that there was a known leak at this tub. I mean, for goodness’ sake, there was a towel below the drain! We assumed that the occupants simply no longer used this bathroom.

It turned out that we were wrong. Later in the day, the sellers came home, were furious about the leak and said that they used this tub every day. I was skeptical, but I went over my photos from the house to try to figure out what could have happened. That’s when I remembered the plumbing vent. When I had felt the plumbing vent move, what I felt was the plumbing vent push down enough to disconnect the slip-joint at the bathtub. Ouch. That leak was my fault and it was a very expensive mistake.

When I look back on that mess, I ask myself what I need to do differently in the future to prevent something like that from ever happening again. The answer is pretty simple: Don’t walk through attics when I can’t see what I’m stepping on.

Note: This advice was originally published on Reuben’s Home Inspection Blog, which can be found at https://structuretech1.com/blog/.

Reuben Saltzman is a second-generation home inspector and the owner of Structure Tech, where he has worked since 1997. He is also a member of the ASHI Board of Directors.