By Stephen M. Gladstone | June 01, 2011
A reminder from Steve Gladstone, ASHI past president, who has been inspecting homes in Connecticut and New York since 1983.

It happens more than we realize … and yet I cannot tell you how many times a realty agent or a homeowner has rolled his or her eyes in mock protest when I emphasize how important it is to lag bolt in the ledger board to the band joist or at least into the sheathing of the home.

“Come on, this thing’s been here without a problem for years,” is a common refrain.

Any inspector who ever has come upon a deck like I found the other day (see photos) would wonder what happened when the deck fell … was there a big party with all the relatives enjoying a Mother’s Day feast on the deck … was it a party with dancing that shook it loose?  Or, was there just an odd sound from the back yard when the wood shingles and bright nails just couldn’t do the job anymore?  Were people hurt?  Would there be lawsuits?  Would the follow-up investigation show no permits were pulled or that a foolish inspector checked off … “pressure-treated deck, looks good.”  Who would be blamed? And realistically, who really was at fault? 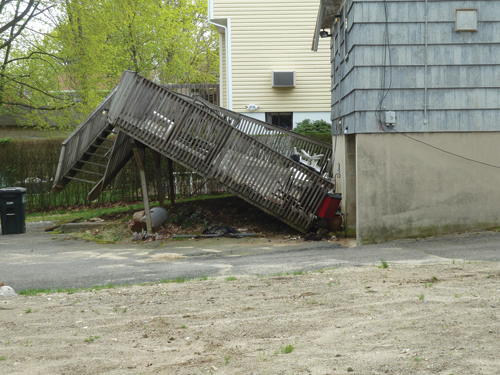 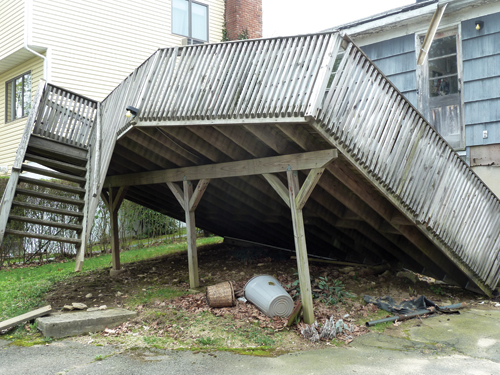 I encourage you to look carefully at deck attachments on every job. Recommend lag bolts, joist hangers and metal nailing plates. Remember that some of the newer decking materials have corrosive chemicals in them that will eat steel. Carry a copy of these pictures to show clients what can happen. Let’s be safe out there.

Editor’s Note: ASHI members are celebrating the first week of summer with Simpson Strong-Tie by doing deck inspections for qualifying homeowners in three metro areas: Atlanta, Chicago and Seattle. Also, Joe Corsetto, ASHI past-president, served as the onsite professional for a deck-collapse program staged in New Jersey by Simpson Strong-Tie at the request of the CBS Early Show. More to come about the ASHI members who volunteered for the ASHI/Simpson Strong-Tie Safe Deck Program.

ASHI Past-President Stephen Gladstone has been inspecting homes since 1983 and is the President of Stonehollow Fine Home Inspections, a multi-inspector home inspection and environmental testing company. He is a past President of both the Southern New England and Coastal CT. Chapters of ASHI®, in CT.. He has written many articles for local papers, has been nationally featured in Reader's Digest and The Wall Street Journal, is a contributing author for the ASHI® Reporter, and has his own Saturday morning radio show "Around the House with Steve Gladstone" on WSTC and WNLK radio.