By Randy West | June 01, 2008
After Randy West’s chapter members saw his photos from this inspection, they encouraged him to share them with the entire membership.

Believe it or not, the walls of this home were in good shape.
Otherwise, West says he would have recommended tearing it down and starting over.

“All the systems needed major improvements and no system was complete,” he said. “The buyer was an electrician, and he planned on fixing it rather than replacing it.”

Right from the beginning, West knew this house redefined the term fixer-upper. Here are some of the photos from his report. 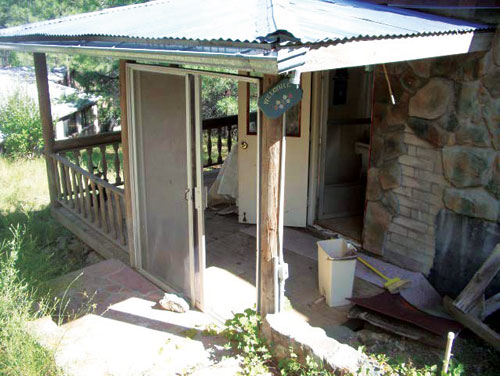 I guess this is an 'exterior' door since it goes from the outside to the inside. 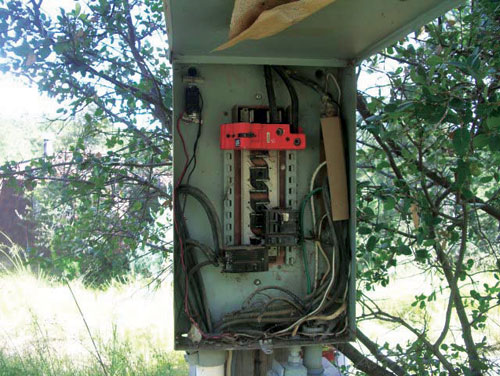 The main panel is on a post in the front yard.

Light switches were installed on the main panel. 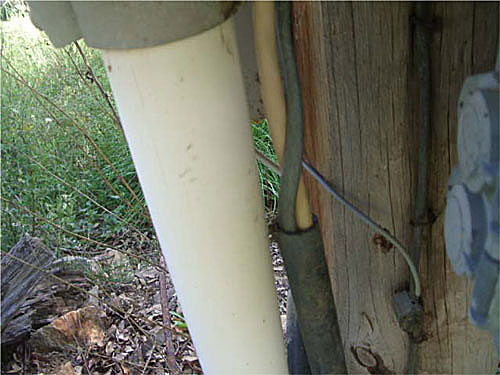 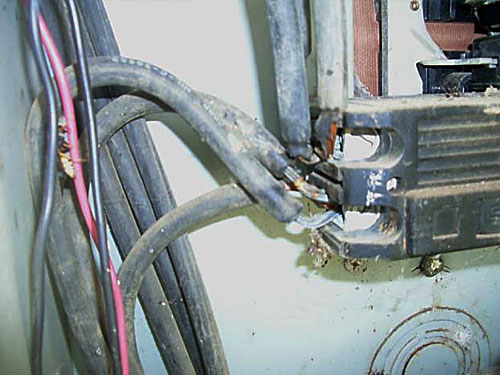 There was exposed wire under the main panel.

There were three wires connected to the 100 amp subpanel breaker. 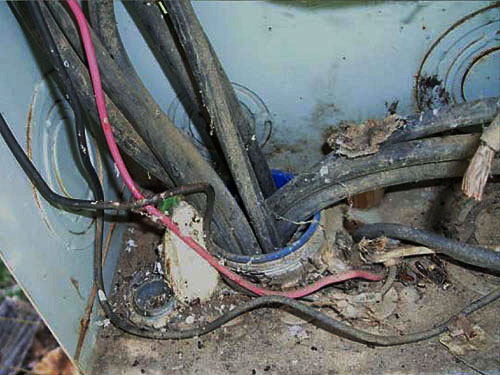 There were missing cable clamps and openings in the panel. 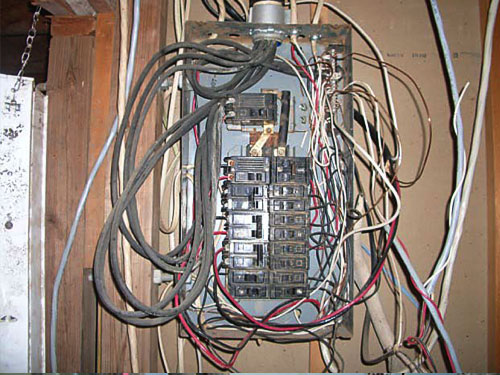 The subpanel in the garage was neatly arranged. Not. 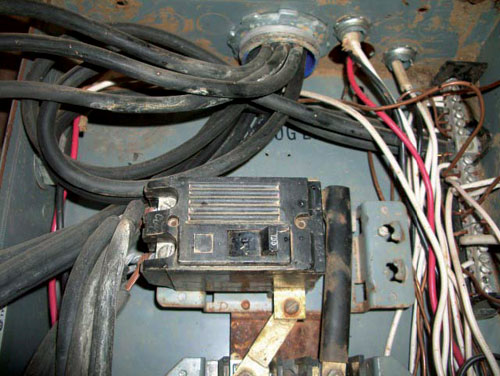 There was a "triple tap" on the main breaker in the subpanel. 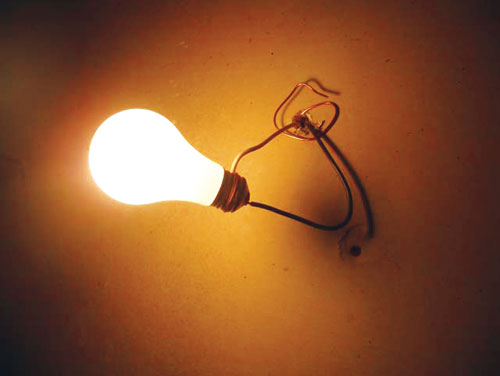 Many of the light fixtures were hanging by wires. In the garage bath, the wires were soldered directly to a bulb – no socket. 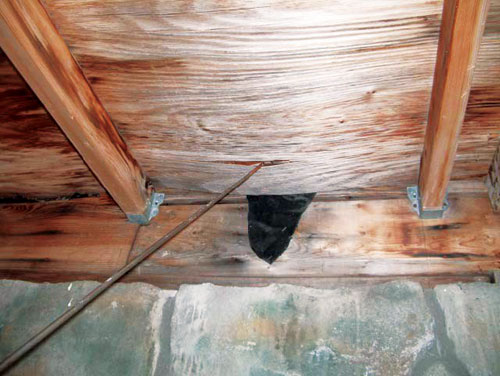 Moisture damage was everywhere. Note the damage to the plywood decking. 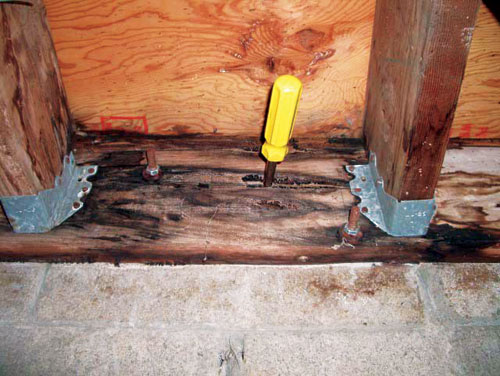 There was moisture damage in the garage, too. This is the ledger board on the front wall. 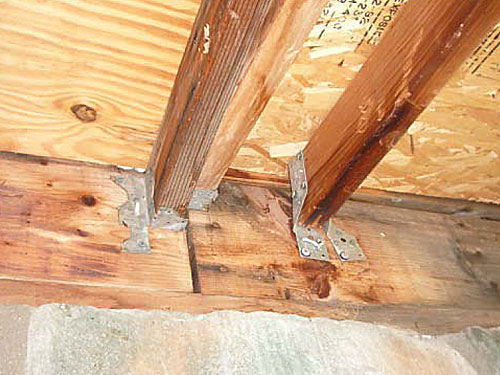 There was moisture damage and improper joist hangers under the deck. 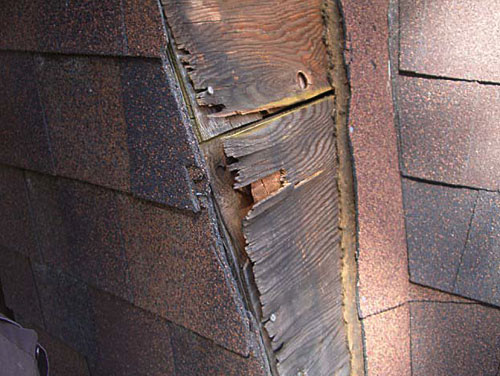 There was considerable moisture damage to the plywood by the front porch. 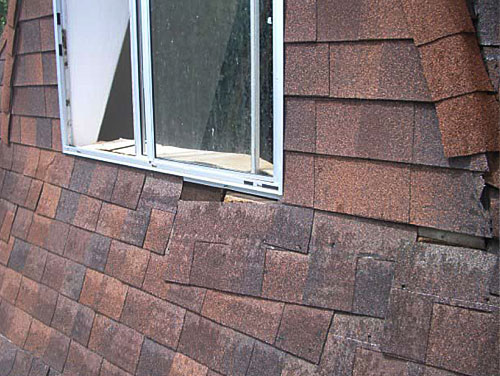 There were loose shingles in several areas. 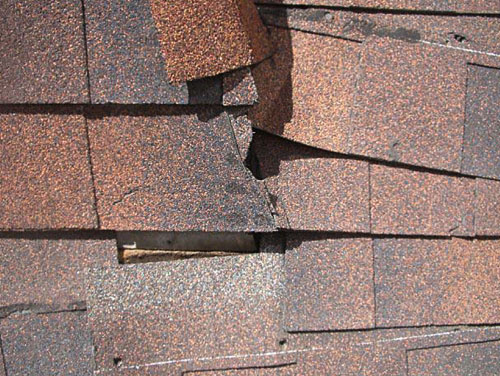 Note the plywood sheeting visible under the shingles. 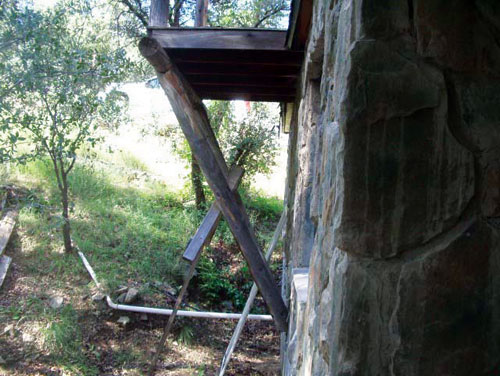 The front porch was not well supported or secured to the house and it lacked a railing. 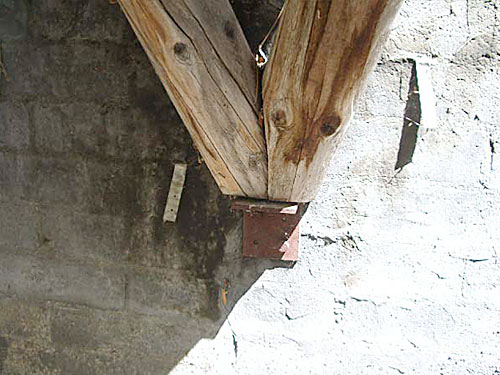 The bottom of the porch supports are secured on a metal bracket, but the top of the porch is not not well secured to the house. 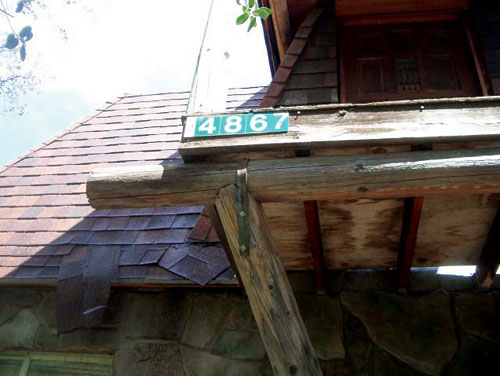 Here again, moisture damage was visible under the loose shingles. 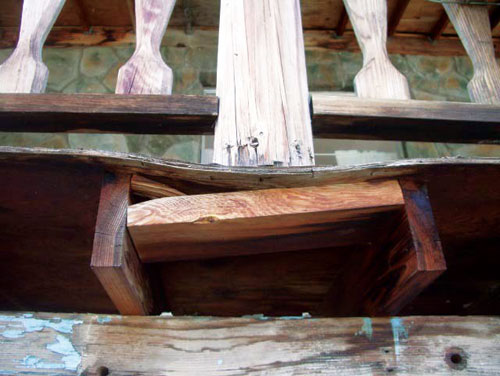 Plywood was used to support some of the deck cover posts, which support the roof and snow load. 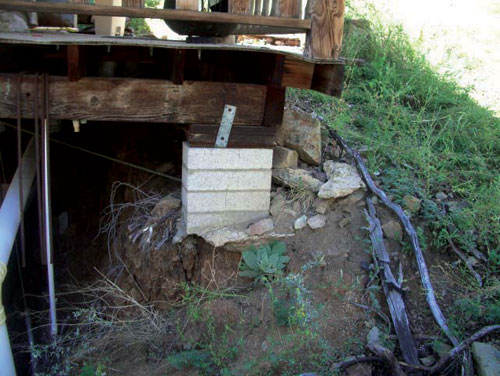 The ground was eroding under a deck column. 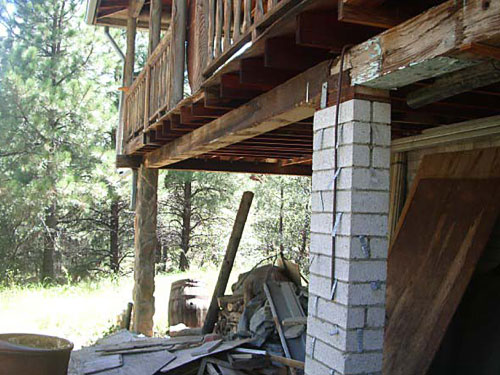 The deck beams have a long span. 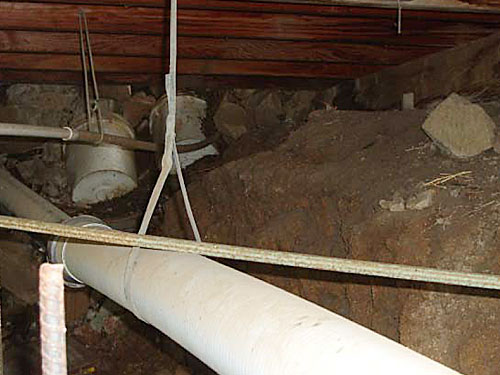 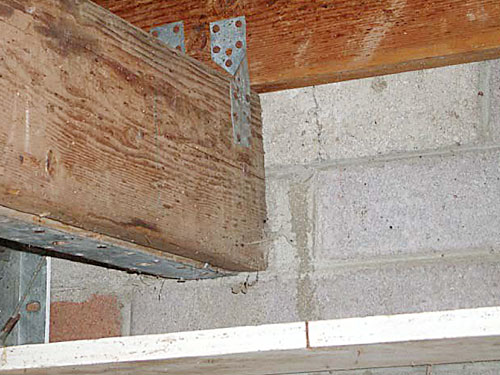 The beams in the garage were not well supported. 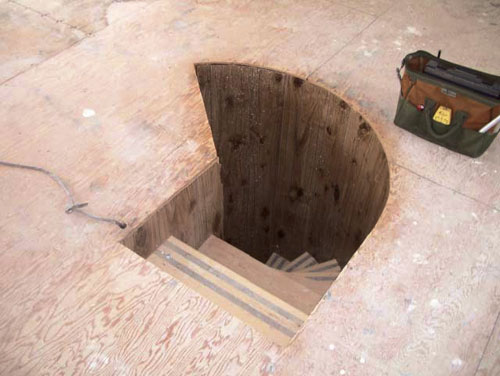 Fixer-uppers almost always present safety challenges for inspectors. In this one, the stairs in the loft lacked a railing around them and a handrail. The energized electric wire by the steps was one of many in the house. 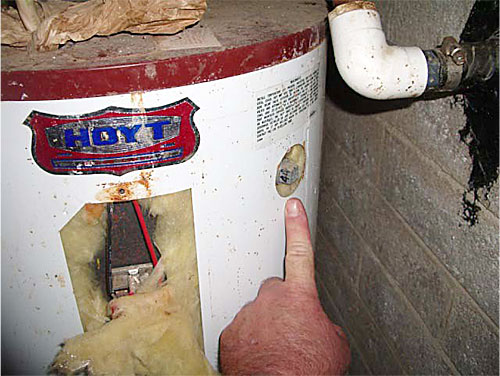 There was no TPR valve on the water heater. The paper around the electrical wire is not considered a cable clamp. 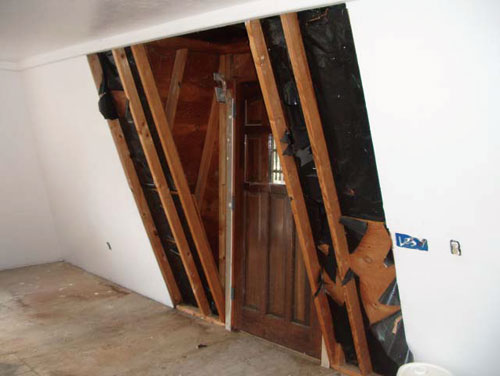 Damage to the plastic vapor barrier in an unfinished area by the front door was a moot point because the barrier had been installed on the wrong side of the plywood. 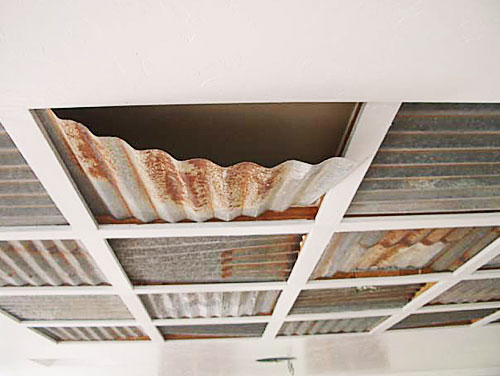 There were some corrugated metal "ceiling panels" in the loft. This is a unique finish material. 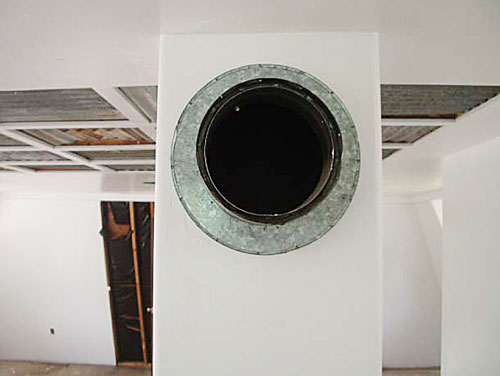 There was an opening into the metal chimney in the loft and another in the garage. 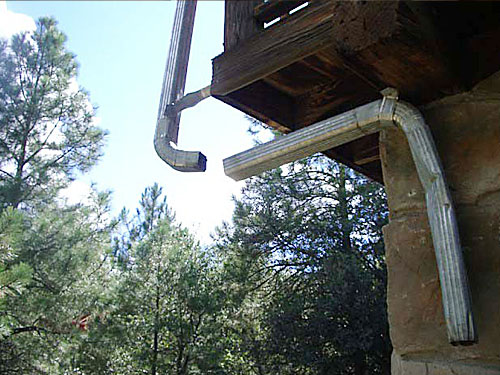 The gutter downspouts were disconnected. 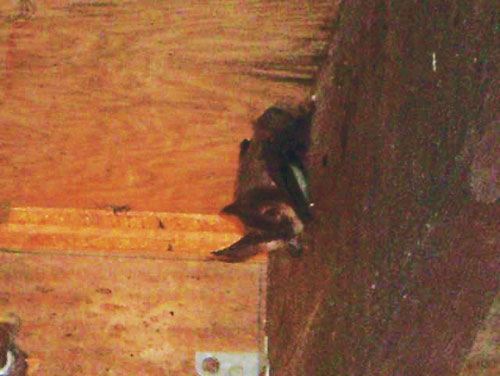 And what would a home inspection be without an unwanted guest? In this case, a bat had entered through an open vent/window in the garage wall.

West said it was impossible to comment on every single defect found in this house. The photos here are only a sample of those he shared with his chapter and included in his report, but they provide an example of a type of challenging inspection ASHI members are called on to perform.

Randy West is a member of the Council of Representatives and president of the Arizona Chapter of ASHI. He is the president of Professional Building Consultants in Prescott, AZ.