Opinion: Nice House, but is it Legal?

If you designed or built a home that met energy code just a few years ago, that same home will probably not be legal to build just a few years from now. Some might say it's about time, while others may think it's not a good idea to increase code requirements during a depressed housing economy.

For over 25 years, residential energy codes improved an average of less than 1 percent per year. But since adoption of the 2006 International Energy Conservation Code (IECC), codes are improving radically — perhaps by as much as 50 percent when the 2015 IECC is published. 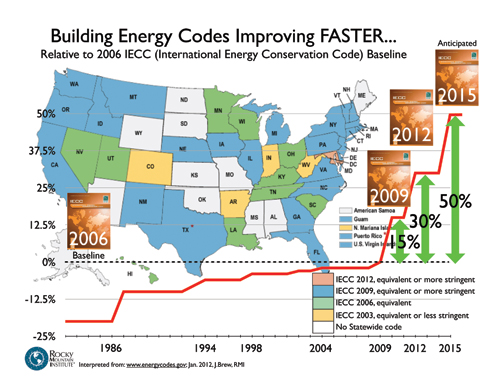 I haven't met anyone who thinks energy costs will decrease, and almost everyone would appreciate smaller energy bills and lower emissions from their regional power plant. However, some builders think a slow housing market is not the time to add cost to a home. As recently reported by MINNPOST, Minnesota builders are voicing objections to potential increased costs for more efficient building codes.

At Rocky Mountain Institute, we purposely launched our Superefficient Housing Initiative at nearly the lowest point in this housing economy because it made sense to us. If a builder, developer or designer is going to learn or try something new — or build on his/her brand with a new product offering, there's really no better time than when the market is slow. You're certainly not going to retool your design and construction approach when you're really busy designing or building homes.

Our initiative set out to prove that housing can be designed and constructed to be 60 percent more efficient than the 2006 IECC for about the same cost as just meeting the code. We didn't set this target arbitrarily — we started by scanning the horizon of existing codes, standards and guidelines. And there are a surprisingly large number of them — representing a wide range of energy targets and goals. I have attempted to rank these on a Home Energy Rating System (HERS) scale for relative comparison in the graph above. 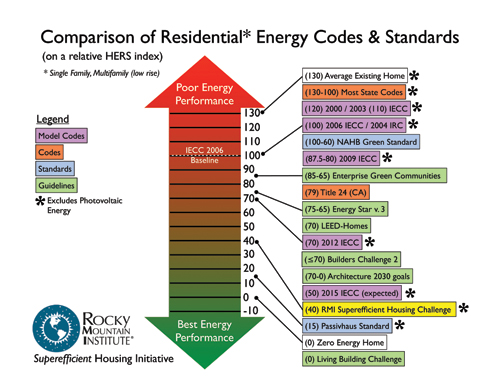 While most of these codes and standards don't dismiss aggressive energy performance, they also don't necessarily require it. Therefore, "your mileage may vary" when applying a specific code or standard to a new home or building. While codes are a critical part of the energy solution, we need scalable, affordable solutions today to get ahead of the new codes and avert the detrimental effects of inefficient buildings. Between 2010 and 2050, the U.S. housing stock will change dramatically — with new construction, demolition and replacements, we will add 20 billion square feet of new housing. Since the U.S. housing sector uses more energy than the commercial sector, this is our real opportunity to aim our efficiency goals well beyond code, and begin to imagine communities of energy independence.

As energy codes advance more rapidly, we also need a new way to talk about what we are aiming for. With over 3,000 code jurisdictions in the United States, it's nearly impossible to understand what it means when a new home is designed and constructed to be 30 percent better than code. Really? What code? Or when a new net-zero energy house has a large photovoltaic array on the roof and includes a heating system, a cooling system and a ventilation system (in a relatively mild climate), you have to ask yourself whether it's efficient or not.

If the design and construction community were able to communicate energy efficiency in a new way — for instance, from a baseline of zero up as opposed to top down (from the maximum allowed by code) — we might begin to have conversations that move us closer to where we need to be. Forget net zero; how close to zero before renewable energy supply is a better comparison model.

I am personally excited about the Passivhaus energy standard as a relatively new movement here in the United States. The Passivhaus (Passive House) approach, originated in Germany, and is what I consider the world's most aggressive energy efficiency standard.

The Passive House standard can apply to design, construction and retrofit of our schools, offices and homes, and uses between 80 and 90 percent less heating or cooling energy than typical existing stock. While it isn't free to build this way, the economics will improve as more and more manufacturers of windows, insulation and ventilation units see increased demand and innovate on their current models.

When it comes to simple solutions, based on my building science knowledge and experience, this I know to be true: A tight building envelope with superior (tuned and optimized) windows and little or no thermal bridging is the best bang for the buck. If these elements are truly optimized for climate, then you only need to worry about what you don't need to do, such as eliminating air conditioning or perimeter heating, and getting excellent indoor air quality using a small ventilation system.

We also need whole-house retrofits that approach or even meet the Passive House standard. A few of these projects are beginning to show up in California and the Pacific Northwest. Whether they meet the standard isn't the point; it's all about making significant reductions to current energy use to provide resilience for the new energy era at our doorstep.

This article was originally published by Rocky Mountain Institute on their blog, The Outlet (blog.rmi.org). Reprinted with permission.

James Scott Brew is a Principal Architect and he jointly oversees the work of the buildings practice area at the Rocky Mountain Institute (RMI). He has more than three decades of sustainable design and construction experience in historic, commercial, institutional and residential architecture. Brew is presently co-leading RMI’s Superefficient Housing Initiative, which is aimed at affordable superefficiency in public, campus, military and workforce housing.