One Inspector's Journey Into Infrared Thermography

By Bruce Barker | July 01, 2008
Four years ago at InspectionWorld, I wistfully looked at the fascinating technology of infrared thermography that offered the potential to expand my practice into new areas. But with infrared (IR) cameras costing more than $15,000, I couldn’t see how to recover my investment, much less make a profit. I decided to leave infrared thermography to the multi-inspector companies and to the more adventurous early-adopters.

This year at the ASHI conference, I found the price for a basic IR camera had dropped below $5,000. At this price, I might actually be able to make a profit with it. I suspect other inspectors are considering making the same investment. My experiences taking IR camera training and my initial experiences using the camera may interest them.

It helps to know the basics about the technology before buying an IR camera — how it works, what features are important and factors to consider before using it in your practice.

For example, water absorbs and releases heat at a different rate compared to solid construction materials. Water under fiberglass shingles makes shingles heated by the sun appear hotter after sunset compared to surrounding shingles with dry sheathing underneath. This is because the water retains heat longer than the shingles do. Water in insulation behind drywall usually makes the drywall appear colder compared to surrounding drywall with dry insulation underneath. This is because water does not absorb heat as rapidly as drywall.

A simple, but not always accurate, way to think about reflected IR radiation is that the more visible light an object reflects, the more IR radiation the object may reflect. A dull surface, such as an object painted with flat paint, will usually reflect less IR radiation. A shiny surface, such as unpainted metal, will usually reflect more IR radiation Therefore, there can be a significant difference between the actual temperature of a shiny object and the temperature registering on an IR camera or on an IR “laser” thermometer.

Some basic IR cameras do not allow you to correct for an object’s emissivity or to account for reflected IR radiation. It is difficult to take accurate temperature measurements from low emissivity objects without these two capabilities. Although usually not a problem for standard home inspections, the lack of these capabilities would be a problem for some IR inspections. 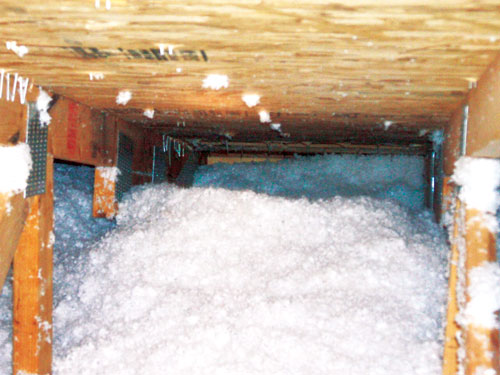 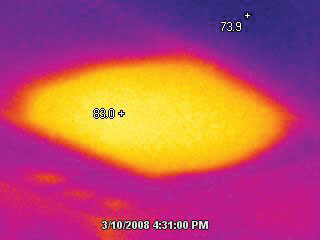 IR inspections are qualitative or quantitative.  For the most part, building inspectors perform qualitative IR inspections, which measure the temperature differences between nearby objects. IR inspections to detect moisture intrusion behind walls and ceilings and under roof coverings are qualitative. So are inspections to detect missing and improperly installed insulation. IR cameras can detect air leaks around building envelope penetrations such as windows, recessed lights and electrical receptacles. In some cases, they can even detect the heat from pest nests such as ants and termites. Under some conditions, they can detect the presence or absence of structural elements such as headers and structural steel. The actual temperature of the target object is less important in qualitative inspections. The difference between the temperatures of nearby objects conveys the important information. Any good IR camera can perform qualitative inspections. 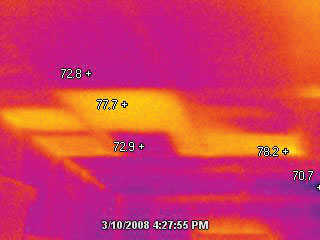 Photo: IR image of batt insualtion not in contact with drywall.

My advice about IR camera training is simple:  If you can’t afford the training, don’t buy the camera. An IR camera is not a fancy and expensive optical camera. Proper use of an IR camera and accurate interpretation of IR images require training. In my opinion, the potential liability involved with IR cameras is too great to assume without training.

The tuition for a Level I Thermographer course is around $1,700. Travel expenses are extra. I took the Level I course offered by Infrared Training Center (ITC) and was well satisfied. ITC is part of FLIR, one of the major camera manufacturers. There are, no doubt, other good training options available.

ASHI’s Standards of Practice (SOP) states that home inspections are visual inspections; therefore, I do not recommend bundling IR inspections with a visual home inspection.  Doing so may increase the liability of the inspector using an IR camera and, potentially, for all inspectors.

IR inspections take time. I expect to be compensated for my time, investment and training. My time includes planning the inspection, performing it using proper IR inspection techniques, analyzing the results and reporting my findings and recommendations. Perhaps most important, I take time to educate my client about the objectives and limitations of IR inspections. This education includes a separate written IR inspection agreement.

I am glad I began the journey to IR thermography. I’m still working IR into my practice, so it has not generated much revenue yet. I believe it will as clients learn about its benefits, particularly in the energy conservation area. In any event, it has been an interesting and educational experience.

IR cameras have their own complex and confusing language Here are some terms and features I found to be important when selecting and using an IR camera.

Temperature range: High and low  temperature limits that the camera can detect.

Temperature accuracy: Margin of error in measuring the temperature.

This feature is important when, for example, the temperature difference between the inside and outside of a building is small. A more thermally sensitive camera will show more subtle temperature differences and may help you detect a problem in some situations. This feature is sometimes called the NETD. More is better for all types of IR work, so get the most thermally sensitive camera you can afford.

A greater number of pixels provides a clearer IR picture and can help you detect temperature differences between nearby areas of the target object. More is better for all types of IR work, so get the best image resolution you can afford.

Fusion pictures: Ability to display an IR picture inside a visible light picture.

This helps you and the client locate the area of concern using visual cues. This is a good-to-have feature for all types of IR work. You can usually convert an IR picture to a fusion picture in the software that comes with the camera.

Articulating Lens: Ability to rotate the camera lens independently from the camera’s display.

Another good-to-have feature if you do a lot of IR work because your outstretched arm can get tired holding a 2-3 pound camera. This feature is available only on more expensive cameras.

It does not help when measuring temperature of distant and small objects. Digital zoom can make the image fuzzier and may not be particularly useful in many home inspection applications.

Bruce Barker is the founder and president of Dream Home Consultants, a consulting and inspection division of B.A. Barker & Associates, Inc. (www.DreamHome Consultants.com) and the author of Everybody’s Building Code, written to help home inspectors understand the International Residential Code.

Bruce Barker is the founder and president of Dream Home Consultants LLC and the author of Everybody’s Building Code, written to help home inspectors understand the International Residential Code. Bruce has been building and inspecting homes since 1987. He currently serves as ASHI President (2021). He is a certified Residential Combination Inspector and a licensed contractor in Arizona, Florida and North Carolina.