Moisture Mystery: The Efficiency (and Caution) of Experience

By Roger Hankey | October 01, 2010
The request was to diagnose and recommend remedies for a chronic wet basement condition. When I arrived, the customer was on the phone, but he waved me in and escorted me to a finished bedroom in the rear, left corner of the basement. The carpet had been pulled away from the corner, revealing a water-damaged carpet tack strip, and a damp area of floor along the left wall about four feet from the corner. 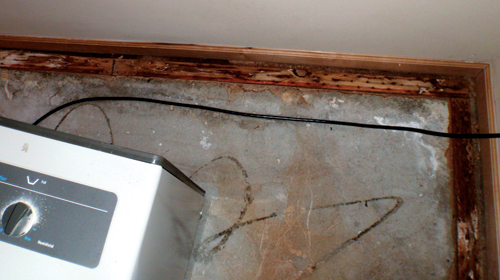 Photo above: The homeowner had pulled the carpet back from the corner of the basement, revealing a water-damaged tack strip and a damp area along the wall.

Photo above: Slight water damage is visible in the finished
ceiling above the damp corner.

The finished ceiling above this area had slight water damage and a dehumidifier was operating in the area where the carpet had been pulled back. 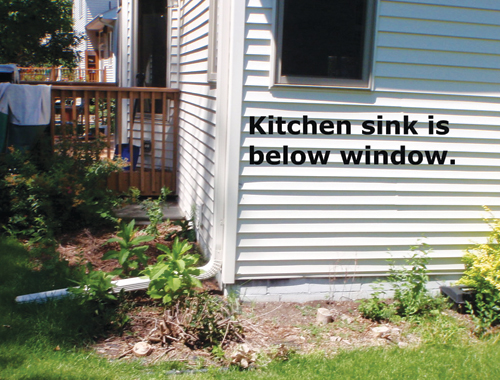 Photo above: Looking at the same corner outside the house, surface drainage is good and a rain gutter with extension is in place.


I told the customer I was going out to the car for some equipment, which I did, but while I was outside the house, I walked around the exterior of the house to the left rear corner. Surface drainage was good in that area, and the roof was equipped with a rain gutter with a five-foot downspout extension. I saw no exterior conditions with the potential to create a wet basement. I did notice a plumbing vent on the roof that was about four feet in from the rear corner. I noted these conditions by taking a couple photos. Then I returned to the interior with my infrared (IR) thermal camera.

Before returning to the basement, I went to left rear room on the main floor, which happened to be the kitchen. The kitchen sink was in the rear corner, and its drain entered the sidewall about four feet from the corner. The owner was still on the phone, but I told him I thought he had a leak at the kitchen sink drain. I asked a young boy about age 10, who was watching TV in the next room, to help me. He agreed. I showed him that I'd filled one basin of the kitchen sink with water. I told him to pull the stopper after I returned to the basement. On my signal, he released the water from the sink into the drain. Less than a minute later, in the basement room below the kitchen, I saw a small water flow in the damp area on the floor between the baseboard and the carpet tack strip.

Next, I turned on my IR camera and viewed a thermal image of the wall and ceiling. The camera showed a cool area on the ceiling, consistent with water soaking the ceiling in the vicinity of the sink drain. I also asked the customer if he had observed any OTHER areas of dampness in the basement. He said, "no." 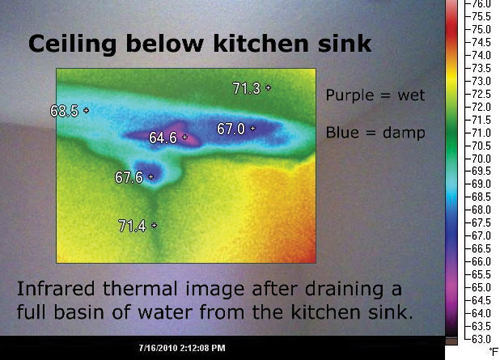 Photo above: Infrared thermal image after draining a full basin of water from the kitchen sink.


All of this took only 10 minutes. The primary reason I was able to diagnose and verify this leak so quickly was that I had encountered three similar conditions in the past five years, including one in my own house. One of these prior conditions I'd even written up for our Moisture Mysteries page. The same story also was reprinted in the September 2009 ASHI Reporter.

As I discussed my findings with the customer, he indicated he had others attempt to diagnose this issue, but without success.

The rapid diagnosis of this leak illustrates the benefits of hiring an experienced home inspector. Qualified home inspectors are generalists who encounter a wide range of conditions and, if careful, bring not only their experience to bear on the diagnosis, but will be open minded enough to exclude from the inspection the assumptions of others or their own biases. Instead, they focus on the conditions found. I reached my preliminary diagnosis in this case as soon as I saw that the kitchen sink drain was directly above the water damage, but the remainder of the inspection process was the due diligence of verifying the preliminary diagnosis by doing the drain leak test, getting a history from the customer and doing the IR thermal imaging. Failure to conduct these verifications could have led to embarrassing and/or costly faulty conclusions, including failure to identify multiple causes for the leak. The diagnosis was made without the benefit of the IR camera, but use of the IR camera made verification easy. Use of a moisture meter would have been another effective verification method.

Home inspectors can benefit from this example by applying the principles of a careful, logical progression from gathering evidence, forming a plausible theory, testing the theory and attempting to rule out other causes. While ASHI® Standards do not require the inspector to determine the cause of any adverse condition, the standards do require recommending a course of action or further investigation.

In problem-solving cases such as this, calling for further investigation would be an admission that you could not determine the source of the leak. While a referral to other intrusive investigators may occasionally be necessary and appropriate, a typical moisture-investigation customer expects an identification of the most likely cause of water intrusion and a recommended course of action.

The recommendation in this case was to have a qualified plumber repair the kitchen sink drain and a qualified drywall firm repair the wall and ceiling once the drain piping has been corrected. The customer was happy to finally have this chronic condition diagnosed since he had put up with this occasional dampness and a disrupted bedroom for months. The customer even posted a favorable report of our service on Angie's List®.