“My basement carpet is damp and smells moldy,” the caller said. It sounded as if I’d being doing another typical wet basement investigation, but as it turned out this one wasn’t typical. I began by examining the wet, smelly area, which was in a wood-paneled, 8-by-8-foot room in the basement. The room was used as a large clothes closet, with numerous metal storage racks for garments and shoes. 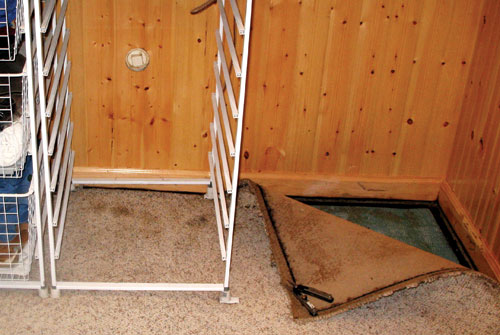 I knelt to lift the corner of the carpet, but quickly arose with wet knees. The moldy odor was strong and I quickly determined that a large area of the carpet was wet. I asked the clients how long ago they first noticed any dampness or odor. They said the odor had been getting worse over the past few weeks, but they only recently noticed the dampness.

I recommended immediate removal of the carpet and pad, and offered to aid in moving the racks and removing the smelly carpet and soggy pad.

The basement was small and filled with many stored items, but there was no evidence of dampness elsewhere. Once the racks, carpet and pad were out of the way, I looked for the source of the water. There was a partly clogged rain gutter on the porch, which adjoined the house on the same side as this wet closet, but the grade slope and drainage were appropriate and I found no sign of dampness around the basement window in the closet. A close look at the baseboard in the closet helped me direct my search. 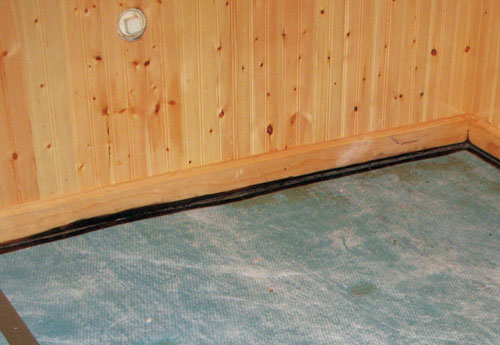 The black stain on the baseboard was highest directly below the drain cleanout plug shown in photo 2. There was no stain on the wood paneling at the cleanout, but I quickly determined that this was probably the kitchen sink drain.

I had the client place the stopper in the sink and completely fill the basin. On my signal, the client released the water into the drain and within a few seconds, a small amount of water appeared on the basement floor next to the wall. The water flowed from behind the paneling and onto the floor directly below the cleanout.

This confirmed the source of the leak, which the client now realized had been a chronic problem. I recommended the client have the drain repaired by a qualified plumber. 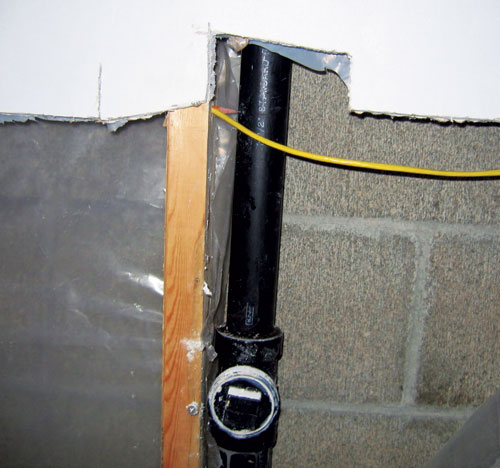 This was not the first time I’d found the cause of a wet basement to be a damaged or leaking drain. An earlier case was equally frustrating for lack of clues. The homeowner had already cut out part of the gypsum wallboard in his recently finished basement in an attempt to find the leak. 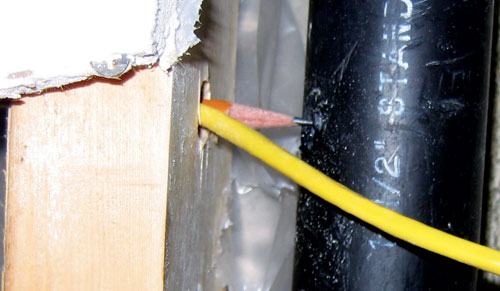 I found no exterior conditions that could contribute to a wet basement, so I had the owner conduct a kitchen sink drain test with a full basin of water. The test revealed a small leak in the sink drain caused when the cable TV installer drilled a stud alongside the kitchen sink drain and his drill just penetrated the inside of the pipe.
The pipe was repaired with ABS joint cement and restored to use.

The lesson from these cases is that when the typical exterior causes of wet basements are not found; remember to check for slight plumbing leaks. This type of leak may not appear if water is simply allowed to run from a faucet into the drain. Draining a fixture full of water helps provide a surge of water more likely to reveal the leak.