One evening in late January, a client called reporting a ceiling stain and asking for a moisture investigation as soon as possible. We had done a full home inspection on this house for the client a year and a half earlier. Our original report listed some stains on the vinyl siding, but did not reach any conclusions since the attic could not be opened during the original inspection.

Upon arrival a day and a half after the call, the client explained that the interior ceiling stain had turned into a leak. He had found and repaired the leak, but the stains on the vinyl siding had become extremely prominent, much more so than during the original inspection. He further explained that the leak had been at the water supply valve in the bathroom vanity sink cabinet. He showed me the valve, and I confirmed that the valve was no longer leaking.

While lying on the floor to examine the valve, I happened to see that the air supply register in the toe space of the vanity cabinet was backed with a strip of foam. The client said his wife had installed the foam to serve as an air filter. When I removed the register grill, I found the supply air duct did not make a direct connection to the register. Rather, it delivered air to the entire bottom of the vanity cabinet. 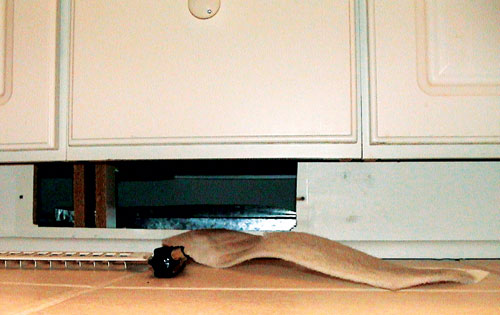 Photo: The supply air duct did not make a direct connection to the register.


A closer look into the cabinet revealed that the water supply pipes descended through the bottom of the cabinet and into the joist space between the sub-floor and main level ceiling. 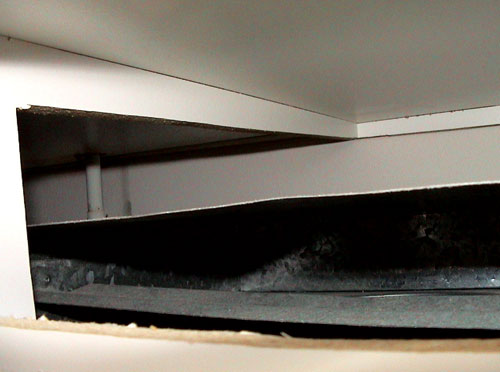 Photo: The water supply pipes went through the bottom of the cabinet.


The water stains — both interior and exterior — were below the bathroom on the same side of the house.

Given that the bathroom was on the exterior wall, I asked if the basement was still unfinished. It was, and I found the rim joist was insulated with unfaced fiberglass batts without an interior vapor retarder or air barrier. Also, the joists were manufactured “I” joists, with provision for quick wiring knockout openings in the web of the joists.

Given these conditions and the pattern of the exterior stains, I concluded that the leaky valve created a high-moisture condition in the cavity between the floor joist space below the bathroom. Further, the poorly detailed air duct with its partly obstructed register had pressurized the joist space with hot air. Finally, I theorized this warm, humid air passed through unfaced fiberglass insulation in the rim of the second floor, at least in the joist space containing the leaking pipe, and probably into adjoining spaces via holes in the joists. This moisture condensed in the wall sheathing and bled through to the siding. 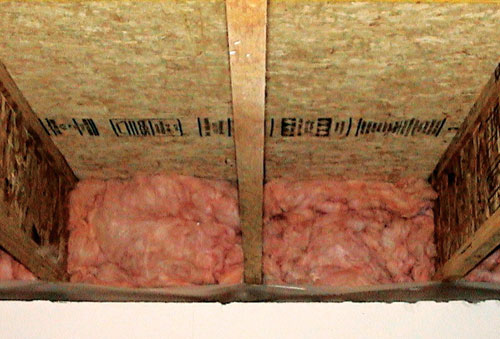 Photo: The rim joist was insulated with unfaced
fiberglass batts. 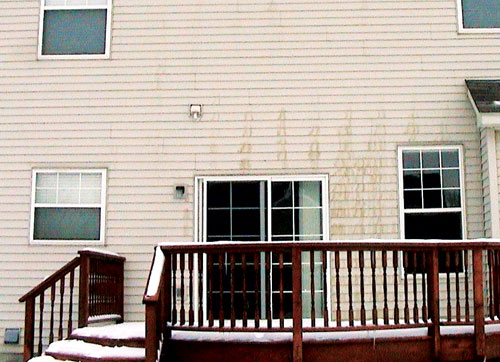 Photo: There were water stains on the exterior of the house.


I recommended the filter foam material be removed from the air grill, and that the air duct be modified so that warm air did not pressurize in the bottom of the vanity cabinet.

The client has not reported any further leaks or staining incidents. The lesson from this mystery is that moisture will migrate from areas of high air pressure and high vapor pressure to areas of low pressure and low vapor pressure at all locations that do not have an effective air barrier and vapor retarder. While it was accepted practice in 1998 to install rim insulation without a vapor retarder, the laws of physics apply equally in the rim as they do in any other wall cavity. Today, Minnesota builders are required to properly detail a vapor retarder and air barrier on all areas of the building envelope.


Reprinted with permission from www.hankeyandbrown.com.