Mystery I: The wet attic in winter

A distressed homeowner called us on a Friday afternoon in late January with a frantic story of water dripping through a bedroom ceiling light fixture and a wet stain at the corner of the bedroom ceiling. The client stated he had a new furnace, water heater and central humidifier installed earlier that month. He said when he looked in the attic and found everything wet, he contacted the furnace installer, who sent out a representative to look at the attic. The installer’s representative recommended the attic be examined for air leaks from the house into the attic (attic bypasses). We recommended the humidifier be turned off; however, the client said he had already done so.

Given the conditions and events described over the phone, we recommended the attic be examined as soon as possible and scheduled our appointment for the next morning. Upon arrival, I examined the new furnace, water heater and humidifier. I found nothing unusual in these appliances and moved on to the attic access. To enter the attic, it was necessary to remove wire shelving and clothes racks. As soon as my eyes were above the attic hatch, I could easily see the plywood was very wet and portions were frosted along the north eave.

Given the extremely high humidity and the damp plywood, I asked the homeowner for several fans, which I set up in the attic to begin to dry it by forced ventilation. After the fans were set up and running, I began a further examination of the attic. Within a few minutes, I discovered the furnace vent, a double wall metal “B” vent, which looked like it might be disconnected at the first joint above the ceiling.

I moved into position to closely examine the vent, removed some insulation from around it and discovered that not only was it disconnected and offset, but the ends of the “B” vent were damaged. Someone had made one or more makeshift attempts to reconnect the pipe using only metal foil tape.

I repositioned the vent and re-taped it together. I showed the homeowner the photos of the vent and began asking questions about the house. The homeowner recalled that the house had been re-roofed (including tear-off of old roofing) a few years ago. He also stated that the representative from the heating firm, who had checked the attic two days earlier, had viewed it only from a ladder. 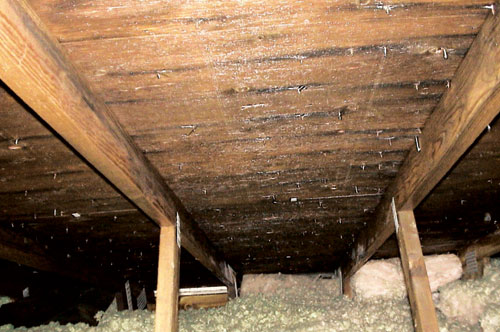 Photo: What caused the plywood and trusses to be soaking wet? 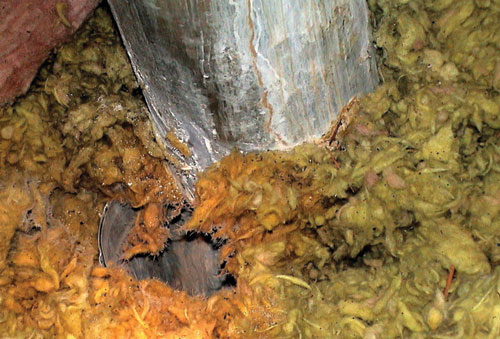 Photo: The double wall metal "B" vent was disconnected and offset. The ends of the vent were damaged and there had been a makeshift attempt to
reconnect the pipe using metal foil tape.

My written report concluded that the primary source of the excessive water in the attic was from condensation from the water vapor found in the gas furnace and gas water heater combustion byproducts, which were venting into the attic. This water vapor had condensed on the plywood due to extremely cold weather (below zero) over several days prior to our inspection. I recommended that the owner have the heating contractor repair or replace the vent immediately at no cost to the client, since the heating firm had failed to determine the integrity of the vent when installing the new equipment less than 30 days prior to this event.

This case provides a critical reminder for homeowners and inspectors. If extremely high moisture conditions exist indoors during winter, the inspector and/or homeowner must FIRST look for combustion venting problems because gas heating equipment produces large quantities of water vapor during operation, and, when operating frequently in extremely cold weather, the quantity of water vapor produced will create excessive condensation on any cold surface exposed to the vapor.

Venting combustion products is essential to remove this water vapor and carbon dioxide, since being heavier than air, the carbon dioxide can accumulate near the burner and displace air needed for proper combustion.  Blocked or disconnected vents can lead to the production of carbon monoxide if insufficient air reaches the burner. Occupants exposed to these high moisture conditions should be moved to fresh air and advised to seek medical attention for possible carbon monoxide poisoning.

Attics subjected to excessive moisture in winter will need to be promptly dried by raising attic temperatures above the dew point.  Also recheck the attic in summer to determine if the plywood has deteriorated or if fungal growth developed.