Major Media Coups in May

In May, the North American Deck and Railing Association (NADRA), ASHI and Simpson Strong-Tie kicked off Deck Safety Month® with a nationwide campaign to educate homeowners about ensuring their decks are safe and secure.

Watch for additional publicity generated by three Simpson Strong-Tie deck safety workshops hosted by The Home Depot. The following ASHI members participated in the demonstrations of safe deck construction techniques and the problems with a poorly constructed deck.

In addition to educating the public and generating publicity, the events are being used to develop a training video that will include comments from ASHI members. Simpson Strong-Tie is an ASHI affiliate, and the society welcomed the opportunity to partner with both Simpson and NADRA to promote deck safety.

ASHI Certified Inspector Hugh Kelso, HKI Building Inspections, Seattle, Wash., volunteered to spend a few hours on a Saturday morning representing ASHI at the Simpson Strong-Tie and NADRA deck collapse demonstration in a Seattle Home Depot parking lot. He was called on to do a lot more than expected.

Kelso explained that KOMO TV planned to film the Simpson "good" deck being built, as well as the staged collapse for a deck safety month segment.

“As it happened,” he said, “two real deck collapses occurred in our area over the weekend, sending 13 people to the hospital. So I was asked to go door-to-door deck hunting the following Monday morning with the TV reporter, Herb Weisbaum, to try to find typical deck problems. Three of the four decks we looked at had problems … rot, loose railings, etc.”

Although Kelso mentioned ASHI during the filming, it was edited out of the broadcast. Nevertheless, the ASHI logo on his shirt was clearly visible throughout his appearance, and his message about the need to inspect decks came through loud and clear.

If the video is still available, it can be found at http://www.komotv.com/news/consumer/18675234.html.

As a result of participating in this campaign, Frank Lesh, ASHI immediate past-president, was invited to film a segment on deck safety for the Today Show. ASHI members were alerted to the May 20 air date.

Kuczynski and Borsellino featured on HGTV in April

“Counting down the real estate mistakes we all make” was a continuing feature on HGTV. On April 18, “Not getting a professional inspection” was identified as #5 on the list.

The 20-minute program featured Kuczynski doing a home inspection and telling viewers, “I would strongly suggest that the client look up the American Society of Home Inspectors and get a list of qualified home inspectors in their area.”

Borsellino, past Garden State Chapter president, was filmed pointing out old piping in a home. Buyers, real estate agents and the program’s host all testified that failing to get a home inspection can be a costly mistake.

L.A. Times – ASHI’s public relations agency, MS&L, worked with Leslie Wiggins of the L.A. Times, who was writing a story based on ASHI’s Postcards from the Field press release.

Results: MS&L provided the requested photos. The article “Home Inspection Horror Stories” ran April 20 in the Sunday print edition of the L.A. Times, circulation 1.3 million plus, and on the Web site, which has more than 152,000 visitors a day.

ASHI made a strong impact in print media across the nation in 2006-2007, as evidenced by these media maps  provided by MS&L. From The New York Times to The Honolulu Advertiser, ASHI’s name is becoming synonymous with home inspection. Read more about each region below. Above: 2006-2007 ASHI Media Coverage Across the Nation 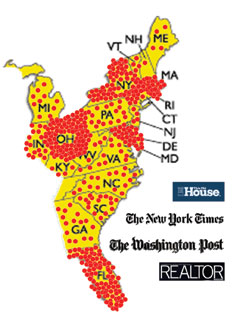 The Eastern region of the country, specifically New England, maintained a steady buzz about ASHI. In addition to top daily newspapers, many weekly newspapers frequently printed articles by syndicated home improvement writers including Bob Bruss and Barry Stone, which carried ASHI mentions. Most of ASHI’s national media placements originated in this regain as well, including: 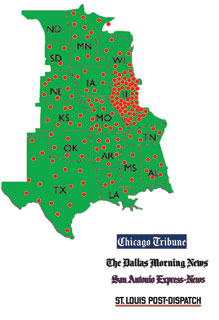 Not surprisingly, Chicago-area media showed a lot of interest in ASHI and coverage was scattered liberally across the central region of the country in the following publications: 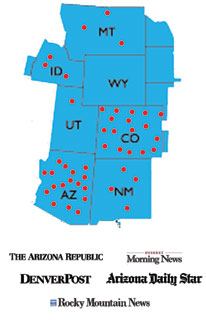 Moderate coverage in the Mountain region came from some of the country’s top 100 daily newspapers, including: 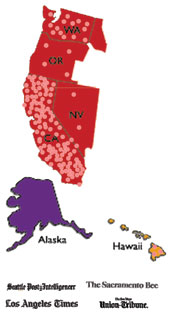 ASHI media coverage in the Pacific region was predominantly  generated from newspapers in California. Top outlets to cover ASHI in 2006 included: