Looking at the Past to see the Future

WE TALKED ABOUT ASHI’S ACCOMPLISHMENTS last month in December’s ASHI Reporter. By the time you read this, though, we’ll be wrapping up one of the most successful InspectionWorld conferences we’ve ever had. With over 81 exhibitors, 45 classes, pre-and post-conference classes, “lunch and learn” sessions, and a new attendance app that revolutionized the flow of information to and from attendees and exhibitors, it’s easy to see why IW has become such a huge success. Watch for videos posted on ASHI’s website highlighting this year’s IW.

But let’s talk about this month’s Reporter. I’d like to suggest some new ideas for the year ahead that will culminate in ASHI’s 40th Anniversary in San Diego! I would also appreciate your feedback on what you’d like to read about. We’ll continue with our old favorites, like Postcards from the Field. But we’re adding a new twist. In December’s issue, we had a video submission from President-Elect Randy Sipe. If you haven’t had a chance to see it yet, go back, click on the link and check it out. Randy’s submission eliminates one of the drawbacks to Postcards. It’s sometimes hard to get a perspective of what the photo shows. Randy solved this by recording a video so we could follow him to the humorous (usually) conclusion of homeowner creativity.

If you liked what you saw on that video postcard and you’re a budding filmmaker, please send us your cinematic masterpiece and we’ll include them in our never ending battle for truth, justice and the American way of making us home inspectors shake our heads at the same time we justify our fees.

Another idea is to look back over the past 40 years of home inspection to see what we used to do and what we now do. I remember starting my inspection career by purchasing a 2D Maglite®. It was a fantastic product, clearly the best-built flashlight around. Introduced three years after ASHI was founded, it was a must-have for home inspectors: durable, solid with an adjustable beam and a lifetime warranty. Durable until I dropped it and the filament bulb broke (although there was a spare in the tail cap). Solid … it weighed down my belt so I was constantly hitching up my pants (but it could be used as a baton to ward off assaults by ferocious felines).

And best of all, unlike the candle that Ron Passero and the other founding members of ASHI had to use before it, the 2D Mag tripled the candlepower with 36 lumens! Now, before you techies jump on me about lumens and candlepower not being comparable, let it be known I’m taking some artistic license here. You’re welcome to write an op-ed if you’d like.

So, what we’ll do this year is compare the past to the present. We may even look to the future of home inspection and conjure up Hestia and go to that Mount Olympus place Bruce Barker is always talking about. 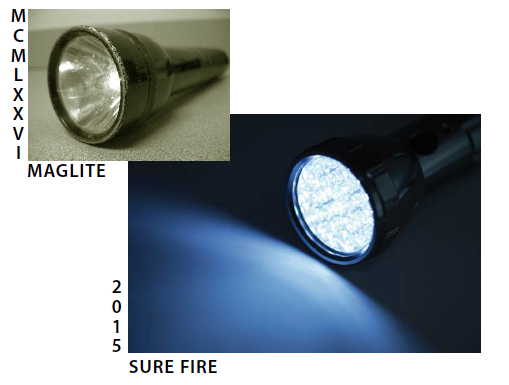