Life on the Road as an ASHI FEMA Inspector

By Jim Hemsell | November 01, 2008
You could hear the wind howling like a banshee outside my New Orleans hotel room window as I climbed into bed. Rain bands were approaching, and there were tornado warnings expected before morning. Hurricane Ike was 350 miles away and bearing down on Houston—a monster storm affecting more than 10 million people along the Texas and Louisiana coasts. Every channel on the TV was providing coverage about the preparations and effects of the hurricane. With blurry eyes, I turned off the TV knowing that tomorrow was going to be a busy day performing FEMA inspections.

This story really started a few years earlier, after Hurricanes Katrina and Rita slammed the Louisiana and Texas coastlines in 2005. Memories of the devastating images of people stranded on rooftops and trapped in the Superdome changed how the country prepared and carried out emergency responses to natural disasters. That year also saw five different hurricanes cut swaths across Florida, so when ASHI had its annual conference in Fort Lauderdale on the east coast of Florida in January 2006, we had our own hurricane challenges. Attendees were scattered to multiple hotels because the primary hotel was still under renovation from Hurricane Wilma.

At the board meeting in Ft. Lauderdale, several ASHI members from Texas and Louisiana suggested home inspectors become certified by the FEMA inspection contractors so they’d have backup work if their markets were devastated by a natural disaster. Many ASHI members lost a significant portion of their income because of Katrina and Rita, and they couldn’t perform FEMA inspections because they had not gone through the training that is necessary to be listed with the FEMA subcontractors. Realizing hurricane preparedness applies to home inspectors as well as homeowners, the board passed a resolution encouraging ASHI members to attend training sessions provided by one of the FEMA inspection contractors.

I attended a PARR class the next month in Fort Worth, Texas, to start the process of becoming a FEMA inspector. The next step was to pass a background check by Homeland Security. I let the background paperwork sit on my desk for months because I was busy performing inspections through the following spring, summer and fall. Eventually, I got fingerprinted and sent in the paperwork, about time for the annual refresher class and some online training modules. By spring 2008, I was finally ready to be deployed, but a healthly real estate market kept me busy, and I was just as glad not to leave the comfort of my home to hit the road and perform disaster inspections.

By late summer of 2008, the real estate market was starting to slow in the Dallas/Fort Worth area. The handwriting was on the wall regarding the flagrant mismanagement of mortgages and mortgage investments. The financial markets were locking up from bad loans and large businesses were lining up to be bailed out by the government. I was a home inspector when the Savings and Loans went belly up in the late 1980s, so I knew that it would be a rough fall and winter. Some long-term work would help smooth the finances as the economy recovers from the election and economic mess that filled the daily news. I was much more mentally prepared to take that call from PARR just before the Labor Day weekend, as Hurricane Gustav grew to a Category 3 storm and started heading toward New Orleans. 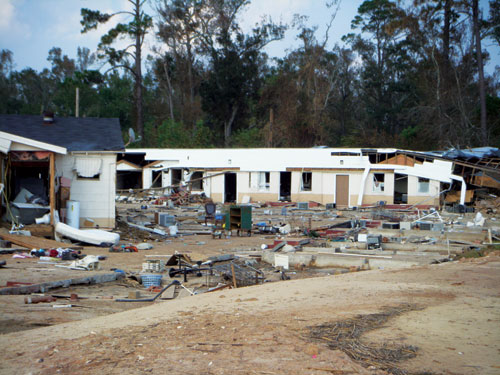 On Saturday, August 30, I received three e-mails and numerous phone calls on my personal, business and cell phone numbers requesting deployment. Gustav was still three days from landfall, but FEMA wanted the inspectors ready to go if another Katrina-type event was going to happen. By Sunday, I had cleared my schedule and accepted the deployment. They were gathering the inspectors in the Dallas area and paying everyone to

come there. I live just north of Dallas, so $400 a day to be ready but still get to sleep in my own bed seemed like a good deal. Even though Gustav took a slight turn just before hitting New Orleans, there was a lot of damage. We were needed. FEMA wanted the inspectors closer to the disaster, so we all moved to Shreveport, La.
It was difficult finding hotel rooms because people were trying to locate out of the affected area. Little did I know that this was going to be a constant challenge throughout the deployment.

I’ll be sharing more of my personal experience for the next two months. In the December issue, I’ll cover the procedures and guidelines that govern the inspection process to award benefits to applicants. In January, I’ll provide special tips, resources and procedures that ASHI members can use to increase productivity and profitability while in the disaster field, including a tip sheet that will be posted in the Members Only section of www.HomeInspector.org.