Learning About the Process in Washington, D.C. 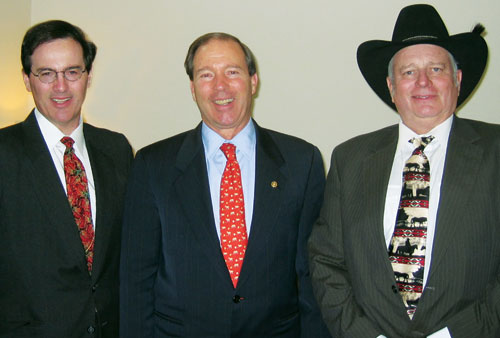 
I just got back from a whirlwind tour of our nation’s Capital with Randy Pence, ASHI’s lobbyist. I come away with a new respect for lobbyists and for what they do for their clients. I also have a different take on how our nation’s laws are formed.

Randy had a full schedule set up for us. We met with my state’s (New Mexico) senators Jeff Bingaman and Tom Udall, and Rep. Harry Teague. When you are a constituent, your elected officials are very interested in meeting with you. All of our meetings went well, and we were able to convey ASHI’s concerns and interests, leaving a short briefing sheet on matters important to ASHI.

Sen. Bingaman is on the Senate Health, Education, Labor and Pensions Committee, and we were able to discuss the lack of association insurance plans. This is an issue the senator’s staff was aware of and will be addressing with the senator. We learned that Sen. Bingaman might draft the small business portion of a larger health care reform bill, so our input was timely. ASHI’s members would benefit from legislation allowing associations to provide pooling arrangements for health plans. Randy will stay involved with this issue and with the legislators working on it.

We were able to talk personally with Sen. Udall. He is on the Senate Environment and Public Works Committee, and we discussed the impact of stimulus monies. Future articles will explain how ASHI members can obtain work from public spending projects. We had a cordial meeting with Sen. Udall, and he seemed open to ideas about home inspection. He is someone InspectPAC might wish to consider supporting in the future.

We also met with U.S. Rep. Nydia Velazquez. She is the chairwoman of the House Committee on Small Business, and a member of the House Subcommittee on Housing. The congresswoman previously had introduced HR 4776, a bill that would require all HUD housing counselors to be trained to educate homebuyers on key details on home inspection and how to find a home inspector. We discussed strategy with her to see if the House Financial Services Committee might accept the bill as an amendment to the predatory lending bill under current consideration. There is lots of interest in this approach. The bill calls for HUD to add training for counselors regarding the importance of a home inspection when buying a house, with specific messages, prepared by ASHI, designed to clarify misunderstandings that divert homebuyers from obtaining home inspections.

On Wednesday night, we attended a fundraiser for the congresswoman and were able to meet with several other legislators who dropped by to support her. What I noticed during our meetings with Ms. Velazquez was how well Randy was received. He has had a long-term relationship with her and InspectPAC has helped fund her re-elections. Both of these have a positive influence on her dealings with ASHI through Randy.

On Thursday, we shifted our focus, but you’ll be hearing more about that next month from both Randy and me. Stay tuned.