Garbage (food waste) disposals are popular kitchen appliances. Unfortunately, many homeowners are not well informed on how to use them. In addition, disposal replacement or installation is a task often performed by persons who either don't follow instructions or have little understanding of proper plumbing principles.
Kitchen remodeling projects often involve replacing the kitchen sink and/or changing its location. Incorrect installation of the drain out of a disposal is a common occurrence. 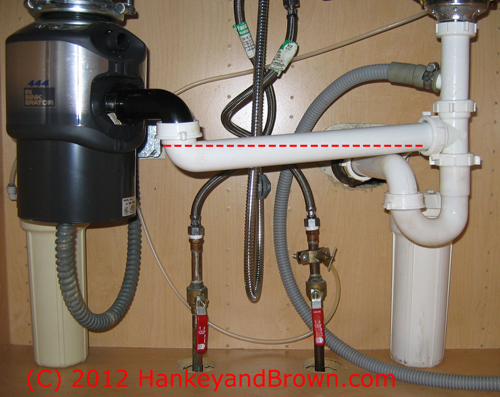 Photo 1, above, shows the improper slope of a disposal drain. The reverse slope of this drain will permit water and food waste particles to collect below the dashed red line. This improper slope increases the potential for clogging and foul odors. 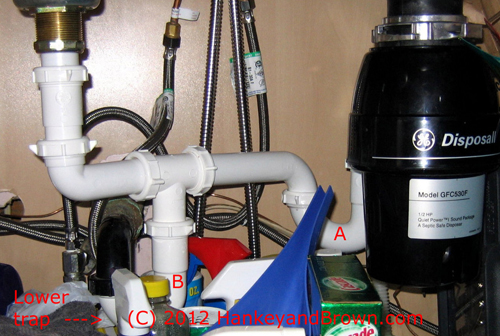 Another similar installation error (seen above in Photo 2) is the use of a separate trap "A" in the disposal drain, in SERIES with an existing trap "B." This also increases the potential for clogging since the food waste and water will be slowed as it passes through the complex set of multiple fittings.

Proper installations often use a "Y" fitting at the sanitary tee in the wall to permit each basin to flow direct to the drain without passing through a second trap. Most disposals are electric powered and must be properly grounded unless they are double insulated. Occasionally, both the plumbing and the wiring on a disposal are incorrect. The unit shown above in Photo 3 has no clamp or bushing at the cable connection to ensure that the wiring is properly secured to the disposal at "C." Further, the drain arm from the disposal goes to a tee fitting instead of an elbow at "B." Finally, the disposal has corrosion on the exterior of the grinding chamber at "A," which is discussed later in greater detail.

Disposal units, and other devices require a proper clamp and bushing to secure the wiring and to protect the wiring from damage. The disposal shown lacks such a clamp and bushing at "A." The image also shows the location of the socket in the end of the motor shaft at "B." This is found on many disposals and permits the use of an Allen wrench to rotate the shaft to free up a jammed disposal. In Photo 4, above, the red button shown at "C" on the bottom of the unit is a reset button for the disposal's internal circuit breaker. Pushing the button in will restore power to the disposal.

Proper use and maintenance is necessary to reduce the potential for corrosion in the grinding chamber of the disposal. Decaying food particles not flushed from the grinding chamber can form acids that can eat away the die cast "pot" metal found in the case of many lower cost disposals. (Pot metal is a low-cost alloy often high in zinc, sometimes used for inexpensive pots.) It is essential that the disposal's grinding chamber be flushed with water after each use. Some manufacturers have additional maintenance recommendations including the occasional grinding of ice cubes in the disposal. See the owner's manual for details.

Photo 5, above, shows a typical pattern of corrosion from failure to flush the grinding chamber. The connection nipple for the dishwasher's gray-waste hose is also vulnerable to corrosion from the strong detergents used in dishwashers. 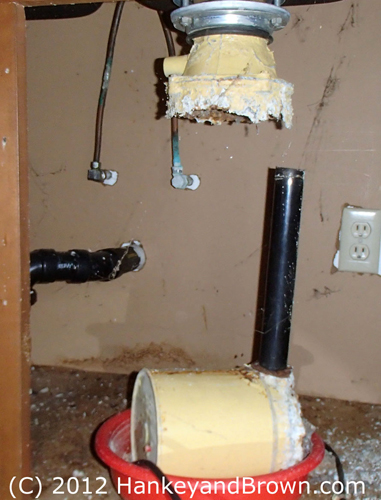 A rare but extreme case of disposal corrosion is shown in Photo 6.

Most disposal manufacturers make several models. The more costly models use corrosion-resistant materials, such as stainless steel, in the grinding chamber and have more powerful motors.

Finally, most plumbers and on-site waste treatment system installers do not recommend the installation or use of food waste (garbage) disposals on homes connected to septic systems. They advise keeping undigested food waste out of the septic system.