Krawler Wins Over Some Inspectors, Not Others

It’s a sad fact that as we age, crawlspaces seem to become less glamorous than they were when we were young. At inspector gatherings, conversations often veer toward fanciful notions of easier ways to inspect crawlspaces. We explore all sorts of pipe dreams. While we were dreaming, Craig Moorhead was doing. Over a period of five years, Moorhead invented and refined a device that he calls the Krawler.

In January, Moorhead brought his Krawler to InspectionWorld 2007 to show and sell on the floor (literally) of the exhibition hall. Lots of inspectors had fun scooting around on the level, carpeted floor, but many had doubts about how effective this gadget would be in the harsh world of a real crawlspace. That’s when Moorhead offered to loan one of his Krawlers to the ASHI Technical Committee to evaluate it for the ASHI Reporter. Since committee members are spread across the country, there was a wide range of conditions under which to test it, and the committee certainly includes a broad range of characters who aren’t shy about providing honest feedback. I should point out that the arrangement involved no quid pro quo; Moorhead expected us to write an honest review.

As you can guess, the committee members’ reactions were mixed. I took to the Krawler right away, but Don Lovering in Massachusetts was unimpressed: “Tried it twice and put it back in the truck. I would not spend the money unless I knew I would always have smooth concrete floors to run on.” 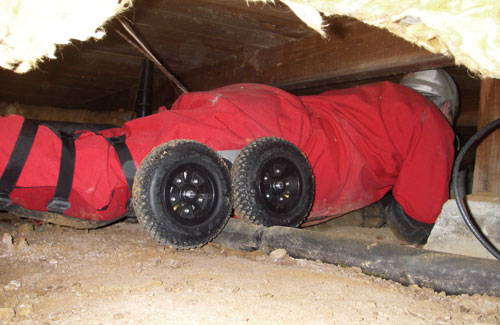 On the other hand, Garet Denise in Colorado liked it. He said, “It really shines in low crawlspaces, which are difficult to get around in otherwise.”

Brian Koepf from Virginia made the following observation: “It makes my neck hurt from straining to look upward (too much football —  maybe that’s just me), and my arms tired quickly from having to support the upper half of my body.” He also noted that the Krawler’s platform doesn’t fit everyone equally.“ My hips/thighs just fit between the metal sides of the Krawler. When I had my field inspection manager try it, he could not fit into it.
He is 6 feet 4 inches tall, 235 pounds.”

George Scott in Colorado added, “When I hit uneven surfaces, it would get snagged and I would have to lift off my weight and pull it forward.”

Personally, I found it to be very useful despite a couple of shortcomings. While each of the other committee members kept the Krawler for about a week, I shamelessly held onto it for almost a month. Here are my experiences with it.

I’m a big guy at 6 feet and 250 pounds. Nearly every house I inspect has a crawlspace under it, and they’re particularly challenging ones at that. Because of the unique way that we frame our floors in this corner of the Pacific Northwest, our crawlspaces are cluttered with posts and concrete piers about every four feet, so navigating through them involves moving in a tortuous path. Most of the crawlspaces I see are less than 20 inches tall — not quite tall enough for me to be on my hands and knees, so I’m stuck belly-crawling them.

The day after I received the Krawler, I inspected a condo that had been built in the 70s. As luck would have it, the unit I inspected was at the end of a row of eight units and the crawlspace entrance was outside at the opposite end of the building. That meant I’d have to crawl under eight other units to reach the one I was inspecting. To top it off, the crawlspace was only 18 inches tall. I gave a sigh, tossed the Krawler in ahead of me and dove in. It took awhile to figure out how to use the Krawler to the best advantage. I wear a cotton jumpsuit, a full-face respirator, nitrile gloves and elbow pads. There’s a flashlight in one hand, a rock pick in the other and a camera in my breast pocket. I quickly learned to put the Krawler right across my hips and propel myself forward with my elbows or my fists. When I came to a 3-inch sewer pipe that was resting just above ground level, I learned to roll right up to it, tip my weight back while using one hand to lift the front wheels a bit, then roll right over it. After traversing all eight sewer pipes, this maneuver became second nature. When I got to my target unit, I hopped off the Krawler so that I could turn over and look up. Brian Koepf’s warning about the difficulty of looking up while lying on the Krawler was right on the money. Despite that, I made it through that crawlspace in record time, and when I came out, I wasn’t even breathing hard.

During the next few weeks, I quickly learned to scan the crawlspace first, before deciding whether or not to pull the Krawler out of the car. If the crawlspace had loose gravel, loose sand or very loose, muddy soil, I knew that the Krawler would bog down. On the other hand, crawlspace floors that were relatively flat and firm were ideal, and, in those, I spend a good deal of time riding around on it.

The most dramatic crawlspace was under an 1885 storefront. There was over 3,000 square feet of 12-inch tall crawlspace littered with broken glass. I glided through there with ease, my back just brushing the underside of the joists.

I enjoyed using the Krawler, but it isn’t suited to all situations. Some drawbacks to consider:

Even with these drawbacks, the Krawler made my time in crawlspaces more pleasant and allowed me to concentrate on inspecting instead of moving around. When I had to give it up to pass on to the next committee member, I went through Krawler withdrawal. A week later, I was on the phone ordering one that I could keep.

You can check out the Krawler at www.krawlgear.com.