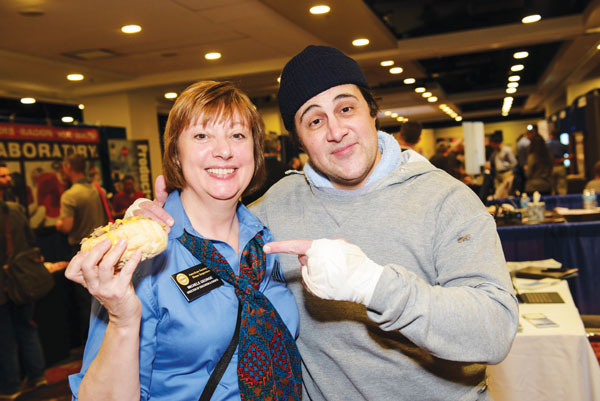 “You’ve Got to be Kidding!” That’s the reaction many board members had when 2012 President Marvin Goldstein suggested Philadelphia as the destination for InspectionWorld 2015.

“Going to a cold weather city is a mistake”.

“Remember the time we had IW in Chicago? It was 20 below zero.”

Those were honest concerns. Marv’s retort was simple and ultimately successful:

• ASHI hadn’t held an IW on the East Coast for years.
• There are a lot of inspectors on the eastern seaboard.
• The local chapters would help with the groundwork.
• The hotel/conference center was ideal.

I have to admit, we at headquarters were skeptical, but with a lot of planning and coordination, IW Philadelphia was, by any measure, a resounding success!

IW 2015 by the numbers: 80+ exhibitors, 800 home inspectors, 200+ guests equated with one of the best and largest home inspector conferences ever. Forty-five educational sessions, several lunch ‘n learn presentations, pre-conference courses, a post conference commercial course, along with plenty of time to foster old and new relationships all made IW 2015 fantastic.

• We’ll be in sunny San Diego.
• It will be toward the end of January.
• We’ll be joined by the California Real Estate Inspectors Association (CREIA).
• Both ASHI and CREIA will be celebrating 40th anniversaries.

Our official tag line is: “ASHI-40 Years of Trust”

Oh! and by the way, although I don’t think anyone will attempt this, there will be a dunk tank (proceeds go to charity) for anyone brave enough to challenge the taunts of the Executive Director.*

Speaking of the Executive Director (ED), I’m writing this at 40,000 feet on my way home from Washington, D.C., where I’ve met with representatives from Housing and Urban Development (HUD), the Environmental Protection Agency (EPA), the Centers for Disease Control & Prevention (CDC), the American Association of Radon Scientists and Technologists (AARST), the American Lung Association (ALA), The National Center for Healthy Homes, Citizens for Radioactive Radon Reduction and The Children’s Environmental Health Network.

I’ve been attending workshops with these organizations for almost two years now. Our goal is to vastly increase the number of homes in the United States tested for radon. For that reason, we will need to train far more radon testers than are currently available. That’s why ASHI was invited to the table to join with these industry and government leaders in this noble challenge. Stay tuned for more up-to-date information on this topic.

We’ve been meeting over the past year and a half to develop the goals necessary to dramatically decrease the number of deaths occurring from radon exposure. ASHI was invited because of its reputation for high standards. Needless to say, we’re held in high esteem by these federal, state and private industry agencies and we’ve been happy to participate in this worthy endeavor. Our group has met with EPA Administrator Gina McCarthy and she had this to say:

“Our near-term goal is to reduce unsafe levels of radon in 5 million homes by 2020, preventing 3,200 lung cancer deaths every year. Our ultimate goal is to eliminate avoidable radon-induced lung cancer in the United States. We know we can do it. A new and improved strategy, with commitments from industry, government and homeowners to test for and deal with radon in homes they buy, sell and build can have a huge impact on improving public health and cutting health care costs.”

Another feather in our cap comes from the state of South Carolina, which has passed into law the ASHI Standard of Practice for Home Inspectors. It gives full credit to ASHI, copies our SoP word for word, gives all the important information on "Find an Inspector" and how to contact ASHI. This is the best news we have received in South Carolina in a long time.

Well, that’s it for this month. I’m sure I’ll have more to fill you in on next time.

*ASHI staff, the Board of Directors and any inspectors who have a grudge against the ED are excluded from participating in the dunk tank. That leaves Vicki, who doesn’t need an excuse to punish me.