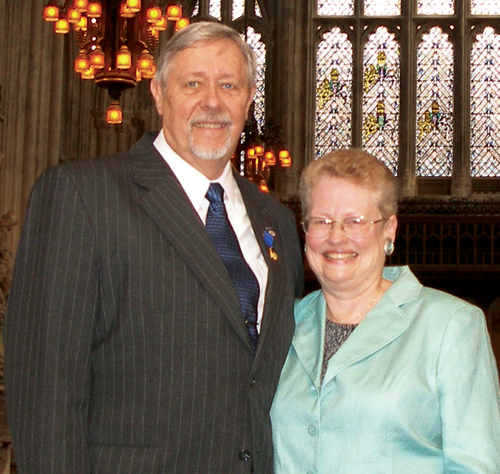 Don Nelson with his wife Pam after receiving the Freeman of the City of London designation in 2006.


ASHI Certified Inspector Donald Axel Nelson of Northbrook, Ill., passed away on March 24, 2012, at the age of 70 after a valiant battle with cancer.

He joined ASHI in 1986 and was serving his second term on the ASHI Board of Directors. His previous three-year term was 2004-07. Don contributed to the society in numerous ways, including serving as the unofficial photographer for national and chapter events, then sharing his professional-quality photos for publication in the ASHI Reporter.

Most recently, he was recognized for his exemplary contributions to the Great Lakes Chapter as the recipient of the 2011 John E. Cox Award.

Don joined the Great Lakes Chapter in 1988 and served as an officer. He was instrumental in the development of the chapter’s Peer Review Program, which is used for continuing education and training by his chapter and several others.

In addition, the experienced home inspector assisted with the Mentoring Program and developed the Chapter Vendor Program. Past-president and fellow Great Lakes Chapter member Frank Lesh said, “We’d be hard pressed to find a better supporter of GLC and ASHI than Don!”

Recognized as the first International Liveryman at the Worshipful Company of Constructors, Don received the Freeman of the City of London designation from the Lord Chamberlain.

When the Cox Award was announced at InspectionWorld-Phoenix, Don proudly accepted it via an Internet connection. 2011 President Kurt Salomon noted that in addition to Don’s contributions to the chapter, he had shared his leadership skills with the attendees at the 2011 Leadership Training Conference and had been honored by the Boy Scouts with the prestigious Silver Beaver Award.

The family requested that any donations in his name be made to the Northeast Illinois Council of Boy Scouts of America, 2745 Skokie Valley Rd., Highland Park, IL, 60035.