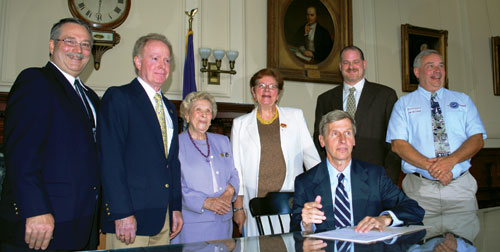 
In 2006, a disgruntled electrician convinced a New Hampshire House of Representatives official, who happened to be his neighbor, to introduce a Home Inspector “Registration” bill, which he believed to be similar to the start of electrician licensing some years ago. Legislators voted it down. However, those of us attending the hearings were able to respond to legislators’ questions, and we referenced the ASHI Position on Licensing and the Model Legislation. Bystanders from another national home inspector organization began labeling the bill an “ASHI bill” even though we had nothing to do with its creation.

Along came 2007, and a member of the other group introduced a licensing bill into the House of Representatives. The bill had many problems: no requirements for testing, education or training (it left everything up to a board); it combined residential and commercial inspections; and it blurred the line between home inspectors and code officers.

Realizing the partisanship of “us against them,” the officers of the Northern New England ASHI Chapter initiated an Independent Coalition of Home Inspectors, with open membership to all home inspectors conducting business in N.H. The coalition recruited more than 70 inspectors from all home inspector associations, as well as inspectors who did not belong to any association. The newly formed coalition wrote a new bill, set up a database of e-mail addresses, hired a lobbyist who recruited a state senator to sponsor this bill, and went to work introducing it in the New Hampshire Senate.

Thankfully, toward the end of the legislative session the poorly written House bill got killed, but damage was done to the coalition bill by the opposition’s negative lobbying. They mounted an e-mail campaign to the state senators claiming that the coalition bill would put many home inspectors out of business. Our sponsoring senator was unable to get our bill through the Senate in large part because of the eleventh hour negative e-mail campaign. The coalition bill was not killed in the Senate, but rather retained for future reconsideration.

In 2008, there were more hearings, more modifications to the bill, compromises and allegations of a “turf war” between ASHI and the other home inspector group. We tried our best to be above the name-calling. The point of greatest disagreement was the inclusion of an exam.

Finally, on July 7, 2008, after passing through the House and Senate, the modified coalition bill was signed by Gov. John Lynch and is now The New Hampshire Home Inspector Licensing Bill. This bill goes into effect on Jan. 1, 2010. Home inspectors will have two years to meet the education and testing requirements. An exam was not named in the legislation, but the Home Inspection Board will select an independent, proctored exam after the board is formed in 2008.

All home inspectors will be required to pass the exam. However, home inspectors who have inspected homes full time for at least 12 months prior to Jan. 1, 2010, shall be receive a grandfather exemption from having to complete the required 80 hours of education.

Those of us in the coalition who fought so hard for “good” legislation feel we have come far on this three-year journey, have learned many lessons and will have to stay vigilant to prevent “bad” modifications to a reasonable bill.

Special thanks to Joe Bates, Coalition Legislative chair and past-president of Northern New England ASHI, and his wife, Karen, for their many hours, days and months of drafting, reviewing and closely monitoring the legislative issues, and their vigilance and drive that pushed this bill to a successful completion. Thanks to Bob MacDonald, president of Northern New England ASHI, for his constant and dedicated participation, and heartfelt thanks to New Hampshire Sen. Jacalyn Cilley for her perseverance and strength in staying behind this bill in the face of strong opposition.

As a last note to anyone involved in home inspector legislation in another state, the best advice we can give you is the following:

1. Form a coalition of home inspectors in your state regardless of association, and iron out any discrepancies BEFORE you go to the legislature. You do NOT want internal home inspector arguments taking place at public hearings. As a unified voice, you will be much more productive.

2. Hire a lobbyist to work for you. Lobbyists are familiar with how things get done in the legislature, and a good lobbyist can make a huge
difference.

David Roth is an ASHI Certified Inspector and president of the New Hampshire Coalition for the Licensing of Home Inspectors.

David Roth is an ASHI Certified Inspector and president of the New Hampshire Coalition for the Licensing of Home Inspectors.