Because Habitat for Humanity’s Vision is “a world where everyone has a decent place to live,” Habitat and home inspection professionals respond to a common need and goal: ensuring that the home is safe.

Habitat’s model requires that all partner families must complete “sweat equity” and attend homeownership classes prior to purchasing their home. Jennifer shared, “We want to work with ASHI to introduce a ‘Health for Your Home’ course to the curriculum so that families know how to complete an annual assessment of their home’s health.”

Habitat for Humanity was founded in Americus, Georgia, USA, in 1976, and now operates around the world, helping to build, renovate and repair more than 600,000 decent, affordable houses sheltering more than 3 million people.

To increase awareness and help more people, Habitat for Humanity holds events, oversees Neighborhood Revitalization Initiatives, and creates partnerships to move its mission forward. For example, now that the weather has warmed up, the Windy City Habitat is increasing awareness of Habitat for Humanity in several ways.

“Led by Chicagoland Habitat for Humanity, we held ‘Raise Your Hand Chicagoland’ on Chicago’s Michigan Avenue from May 29 to June 1. Our goal was to encourage the public to volunteer in the Chicagoland region and to raise awareness of Habitat for Humanity,” Jennifer says. The media and visitors, including Mayor Rahm Emanuel, the Chicago Bears team, and actor Jim Belushi, were enthusiastic as volunteers constructed the exterior of one home and wall frames for 12 houses. “The 13 homes were transferred to the local Habitat affiliates where they will be built and sold to families in the greater Chicagoland region.”

“Most people do not realize that female heads of households have a higher level of poverty than male-led households,” Jennifer explains. “Our annual Women Build event sheds a light on the problem when women come out in support of each other by building and funding the home with a woman in need of decent, affordable housing. It’s a true spirit of generosity.”

Habitat for Humanity has hundreds of ReStores across the country, and Windy City Habitat is opening a new ReStore in Chicago in Fall 2014. “The ReStores sell new and used building supplies at greatly reduced prices to the general public. They also keep materials out of landfills, focus on being green, and help fund Habitat for Humanity programs.”

If you are interested in a rewarding volunteer experience that “brings people together to build homes, communities and hope,” explore your local Habitat for Humanity affiliate. 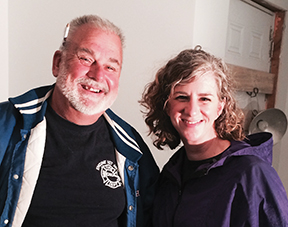