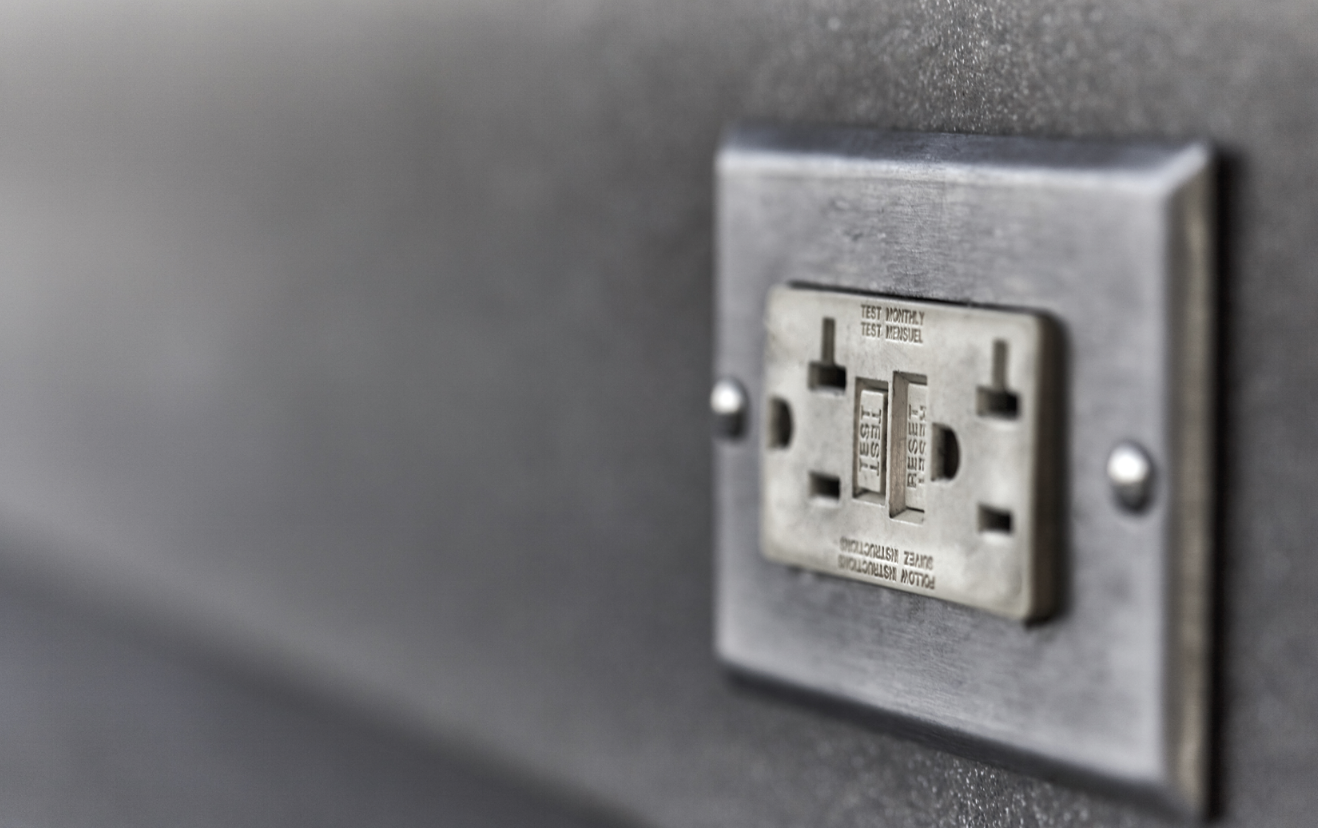 Ground fault circuit interrupters (GFCIs) are receptacles (outlets) or circuit breakers installed to provide ground fault protection for all or part of an electrical circuit. The primary purpose of GFCIs is to reduce the potential risk of electrical shock and electrocution. Photos 1 and 2 are familiar examples of GFCIs. 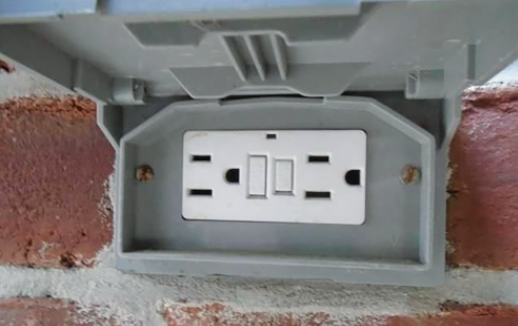 The equipment grounding conductors (ground wires) in branch circuits protect people by providing a safe alternative path for electrical current when the electricity gets where it shouldn’t. The grounding conductor provides a preferred path for electricity rather than flowing through a person. People are unlikely to receive shocks if an energized conductor contacts a device that is connected to a properly wired grounding type receptacle.

Standard breakers are safety devices, too, but they don’t do the same thing as equipment grounding conductors (ground wires), nor do they do the same thing as GFCIs. Breakers or fuses (overcurrent protection devices) disconnect the power by opening the circuit if more electrical current flows through the circuit than it was designed for. If there is a 25-amperage short circuit in a common household circuit, the 15-amp breaker (or fuse) will shut off the power (open the circuit). However, if an 8-amp electrical current flows from the black (ungrounded or hot) wire through the equipment grounding conductor (ground wire), a ground fault, the 15-amp breaker will not trip.

All circuits need breakers or fuses to shut off the electricity in the event of an overload. A GFCI detects electrical leaks (stray current flowing to the ground or ground faults) and opens the circuit, shutting off power. The GFCI detects stray current (leaks), comparing the current flowing through the black wire (ungrounded conductor) with the current flowing through the white neutral wire (grounded conductor). Where it senses less current in the neutral than in the black, it detects a fault to ground (a leak or ground fault) and disconnects the circuit. 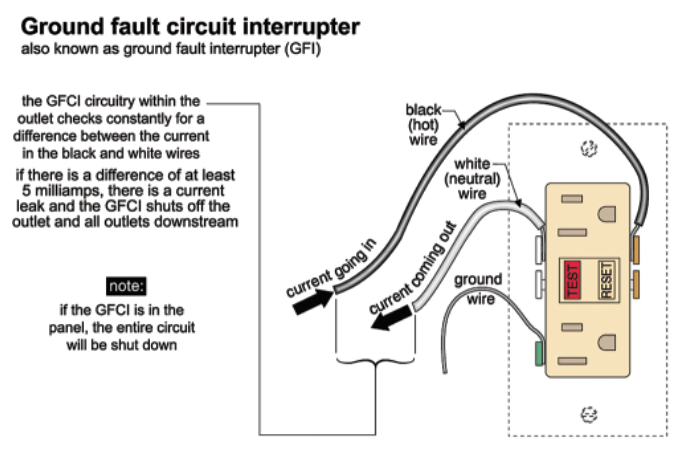 However, if the receptacle is not properly grounded, no current will flow and the appliance case will be energized with 120 volts. If someone touches the appliance, they will probably receive an electric shock. Current from the appliance case can flow through a person to the ground. The less resistance there is to the ground (say, if a person is standing on a wet concrete floor), the more current will flow, increasing the potential for electrocution. Currents of less than 5 amps may cause death.

Example 2: Now, let’s look at the same ungrounded circuit, but with a Class A GFCI receptacle or breaker. When the appliance is sitting on the table with its hot (energized, live) case, no electricity is flowing, although there is a potential of 120 volts at the case.

In the event of a short circuit (ungrounded black wire touches the neutral white wire), the GFCI may not trip because the current in the two wires is the same; there is no imbalance. If the short circuit allows a current of more than 15 amps to flow, a 15-amp breaker should trip.

Where Are GFCIs Used?

It is important to remember that an ASHI home inspection is not a code compliance inspection. Because codes are regularly updated, typically on a three-year cycle, most resale homes do not comply with all modern codes.

GFCI receptacles are commonly used where water and electricity may come together, and they currently are required in the United States in bathrooms and washrooms, outdoors, in garages, in laundry areas, above countertops, in receptacles supplying dishwashers, and in unfinished basements and crawlspaces. They also are required in receptacles within 6 feet of the outside edge of sinks, bathtubs or shower stalls. Receptacles on roofs and in boathouses also need GFCIs. GFCIs are required for electrically heated floors in bathrooms and kitchens, and for hydromassage tubs, swimming pools, spas and hot tubs. A GFCI is not required for a sump pump receptacle.

GFCIs are generally required in modern construction in Canada at receptacles in bathrooms and washrooms, as well as in exterior receptacles and within 5 feet of sinks, bathtubs and showers. They are used in carport receptacles, for example, although not necessarily in garages.

GFCIs are not ideal for all situations. Motor-driven appliances such as refrigerators, washing machines and garage door openers may cause GFCIs to trip frequently, although modern GFCI circuitry and appliances have significantly reduced nuisance tripping. A nuisance trip may occur because on start-up, a motor draws extra current for a short time. During this period, the normally small amount of trace electricity “leakage” in the appliance is increased to a level that the GFCI may consider unsafe (approximately 5 milliamps), even though it is normal for this to happen.

There are, of course, exceptions to some of these rules in some cases, and because home inspectors are not code-compliance inspectors and because the requirements for GFCIs in different locations came into force in different years, inspectors should be careful what they report. A recommendation to install GFCIs in existing homes where they are not present at all currently required locations may be appropriate if the inspector describes the recommendation as a discretionary improvement. New electrical work in an existing home should comply with current requirements, so remodeling typically includes GFCI upgrades. Home inspectors may want to learn when local authorities require upgrades on existing homes.

Is the Receptacle Protected by a GFCI?

Many electricians, for example, put a GFCI receptacle in one bathroom in new houses and put ordinary receptacles in other bathrooms on the same circuit. These receptacles do not appear to have GFCI protection, but they are protected. Ideally, the receptacles downstream from the GFCI device are labeled as “GFC-protected” (Figure 2). 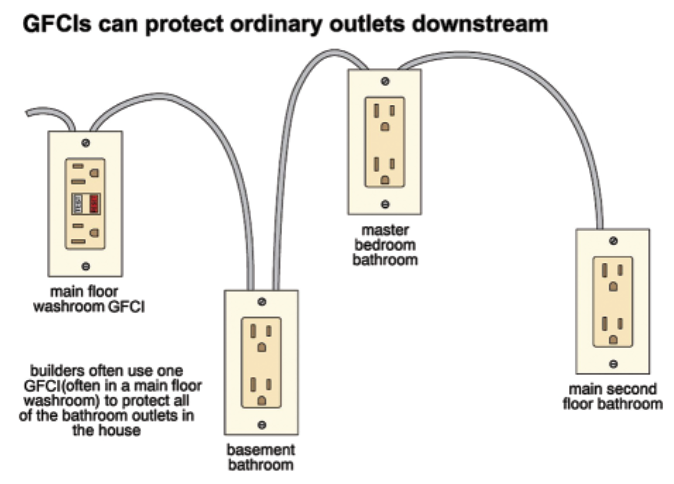 Testing this involves some walking and a bit of time. If inspectors trip the GFCI breaker in one washroom, they can leave it off and check the receptacles in the other washrooms and bathrooms to make sure they are off. Then, they can come back, reset the tripped GFCI in the first washroom and check the receptacles in the other bathrooms for proper wiring.

If an inspector pressed a test button and the power to the receptacle is not cut off, the GFCI is faulty or wired improperly. The circuit tester should show if there is reversed polarity, open ground or open hot, for example. The tester also should show whether the power shut off when the test button tripped. 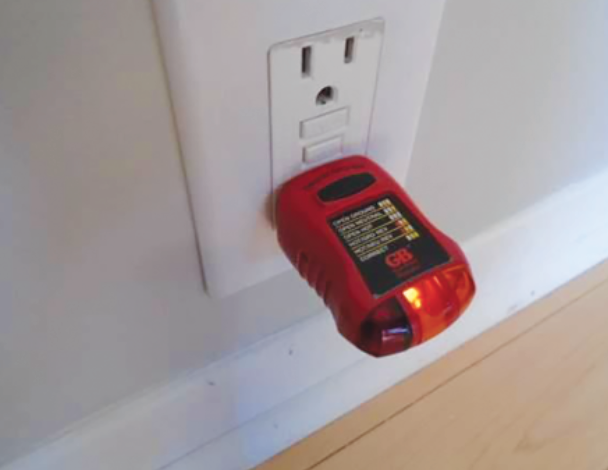 Photo 3. The trip button on a tester will not work if the circuit is ungrounded.

Most GFCIs use an internal test that does not rely on a ground connection. The test button on the GFCI receptacle is a better test than the one on an external tester. Many electrical authorities will accept GFCIs on ungrounded circuits. However, where this is permitted, there is often a requirement to label the receptacle as “no equipment ground” or a similarly worded label. In using a circuit analyzer to test GFCI receptacles, inspectors should use the test button on the GFCI to help come to the right conclusion.

One common adverse condition with GFCI receptacles is that they are wired incorrectly. The line side of the GFCI should be connected to the power supply. The load side of the GFCI should be connected to receptacles downstream. If a GFCI is wired incorrectly, with the power coming into the load side, the GFCI protection is defeated at this receptacle. Receptacles downstream will be protected, but not this one. The dangerous part is that the test button will trip, but there will still be power to the receptacle. That’s why it’s a good idea to have a circuit tester plugged into the receptacle when the GFCI test button is operated.

We at Carson Dunlop do not test GFCI breakers at panels (panelboards), although some inspectors do. Testing these breakers may disconnect devices with digital components (for example, computers and alarm systems), timers or other components that may cause data loss or other problems for the homeowner. We recommend that homeowners test all GFCIs regularly. Underwriters Laboratories (UL) and many manufacturers recommend monthly testing.

There is no difference between GFCI and GFI.These terms are often used interchangeably.

Several types of GFCIs are available: 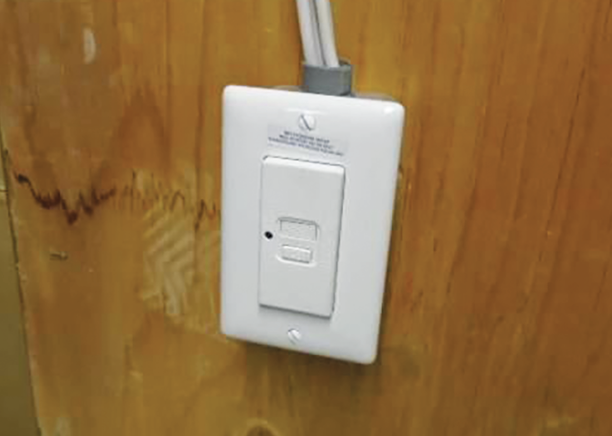 Photo 4. Example of a blank-face receptacle.