By Alan Carson | April 01, 2016
The floor level of most homes is higher than the exterior grade level. Usually, steps are needed to get up to the door. Landings at the top of steps should be large enough to open the door without having to step down off the landing. Concrete steps and landings can be built in several ways:

Settling or heaving problems are common. 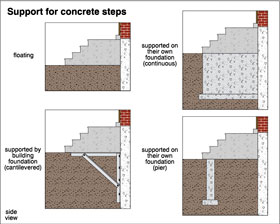 Wood steps and landings should be looked at the same way as interior stairs (with respect to dimension and stability) and the same as exterior woodwork (with respect to wood or soil contact). Wood steps in contact with soil is a condition that is frequently found and can lead to rot and step settlement. The following are common problems with exterior steps and landings:

Rise, Run, Tread Width and Slope Problems
A successful staircase is one that is easy to walk up and down. The rise, run and tread width (depth) have to be within certain guidelines, often dictated by your local jurisdiction. Because this is a safety issue, you don’t have much room for latitude or interpretation. The uniformity of the steps is as important as their rise and run. It is not unusual for the top or bottom step to have a different rise than the rest. This can be a trip hazard and is most serious if it’s the top step. Stairs that have settled or heaved may have a slope. Generally speaking, any slope is dangerous.

The standards for rise, run and tread width vary slightly from area to area. You should learn what is acceptable in your area. Rise is usually 8 inches maximum, and runs are typically 8 to 10 inches minimum. The tread width is usually 1-inch more than the run. In some areas, this is called tread depth; in others, it is head width. This is accomplished by adding a 1-inch nosing to the tread. 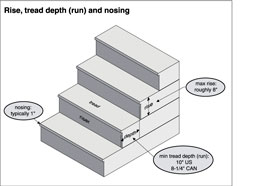 Problems with rise, run, tread width, uniformity and slope may be because of the way the stairs were built or because of settlement or heaving. This is a safety issue. People may fall on stairs that are improperly arranged. Although it is not your role to insist that changes be made, it is your role to point out that the steps are not conventional and that people may fall. Most home inspectors do not measure these dimensions on every set of stairs on every home. With very little practice, one can detect stairs that are outside normal ranges and can pick up irregularities in rise and slope of treads, visually and by walking on them. If it feels awkward, it’s probably wrong. 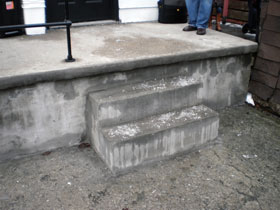 Rise is too high and tread is too short on these steps— a trip hazard. 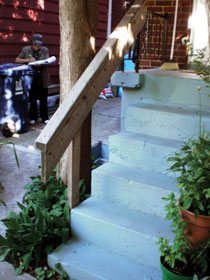 Rise is too high on these porch steps

Missing or Undersized Landings
Where the steps come up to an exterior door, there is often a storm door that opens outward. Good building practice dictates that someone coming up the steps should not be knocked down by someone opening the door from the inside. There should be room for the door to swing out over a landing without knocking a person off. Minimum dimensions for landings often are described as three feet by three feet.

Whether the door to the building opens in or out, there should be a landing. Some jurisdictions will allow a landing to be omitted in situations where there are three or fewer risers serving a secondary entrance. Three risers serving the main entrance would require a landing, even if the door opens inward. Check your local rules.

A missing or undersized landing is an original construction issue. This is a safety issue. People may fall down the stairs. Advise clients of the benefits of a proper landing and point out where they are not present. 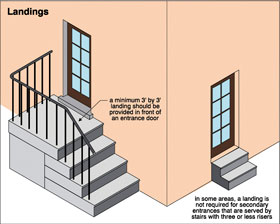 Look for a step going up into the house from the landing or top step. The landing should not be flush with the threshold. Water and snow are likely to get in around the bottom of the door unless there is a step up. The step up into the house should be no more than a typical rise on any step (for example, 8 inches).

Settled or Heaved Steps
Settled steps may be dangerous because of the tread slope and lack of uniformity that results. They also may indicate movement of the entire structure. Repairing steps that do not have a proper foundation or are not properly supported by the building is expensive. This is especially true of concrete or masonry steps.

Settling or heaving may be caused by a failure to provide a proper foundation and footing system on undisturbed soil below the frost line. In situations where the steps are supported by the building, settlement is usually the result of inadequate attachment. In rare cases, the building walls may yield, causing settlement of the concrete or masonry steps and other more serious structural problems.

The trip hazard that is created is the first implication. An expensive repair is the result. In severe cases, structural problems can develop. Look carefully at the junction between the steps or landing and the building itself. Where there is settlement, there is often a gap. Where the gap is wider at the top than at the bottom, the steps may be settling down away from the building. Pay attention to the step uniformity and the slope of the treads, both side to side and front to back, as you walk up the steps. Pay attention to the slope of the landing, bearing in mind that landings should slope a little to drain water away from the building.

In some cases, frost or expansive soils will cause the steps to heave rather than to settle. The resulting problems are similar. It may be safer to describe “movement” rather than mistake heaving for settling or vice versa. Because the movement is often rotational, this is an easy mistake to make. 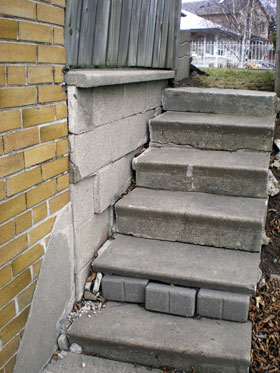 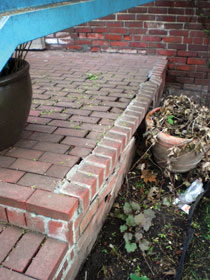 Settling and deterioration on a masonry landing

Spalling Concrete or Masonry
Spalling refers to the crumbling or flaking of the surface of the material. Causes include the following:

Spalling is often the result of the using of de-icing salts or the freeze/thaw cycles. Spalling also can be the result of an improper concrete mix or masonry that is not suitable for use as a paver. In some cases, the implications are only cosmetic. In severe cases, the safety of the stairs may be compromised. Repairs are usually expensive and often involve sandblasting the concrete prior to refinishing.

Check horizontal surfaces and edges, in particular, for spalling or, in some cases, chipping. Look for loose material on the steps or landing. Even in the early stages, this should be documented. Don’t mistake a textured nonskid surface for spalling. Many recommend urea-based de-icing agents rather than salts. Salts are harder on concrete because they crystallize and expand below the surface, causing spalling. 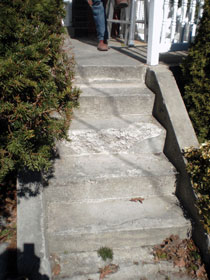 Spalling is very common on concrete and masonry steps.

Carpeting on Wood
Carpeting on wood prevents a close inspection and may hold water against the wood. This is a red-flag situation. Often, carpeting is added for esthetic reasons or to provide a nonskid surface. Carpet on wood steps and decks will hold moisture, inhibit drying and lead to rot. Premature failure of the wood should be anticipated. Wood covered with carpeting cannot be repainted or stained on a regular basis and cannot be readily inspected for damage.

Explain the disadvantage of having the carpeting and recommend its removal for functional reasons. Some people will keep the carpet because of the advantages. Make sure you report your concern about the condition of the wood below the carpeting and your inability to fully inspect it. 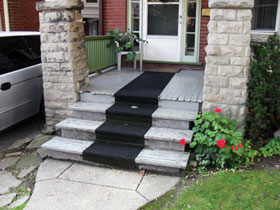 Summary
In this article, we have briefly discussed exterior steps and landings typically attached to porches and decks. We outlined some of the common conditions. In the ASHI@HOME Training Program, we explain the details of other common conditions and their associated causes and implications, along with strategies for inspection.